A familiar story as Germany on brink of recession again, euro on the slide – Forex News Preview

Germany will report its first estimate of fourth quarter GDP growth on Friday (0700 GMT) as concerns resurface about the health of Europe’s largest economy, with the coronavirus outbreak adding to German businesses’ woes. The sluggish performance of the Eurozone’s growth engine continues to weigh heavily on the single currency, which has plumbed to fresh year-to-date lows this week.

The German economy expanded at its slowest annual pace in six years in 2019, growing by just 0.6% as the country’s export-dependent businesses had to grapple with several big challenges, namely, a slowing Chinese economy, rising global trade tensions and of course, Brexit. In the final three months of 2019, German GDP is forecast to have expanded by 0.1% over the quarter, which would bring the annual rate down to just 0.2%. 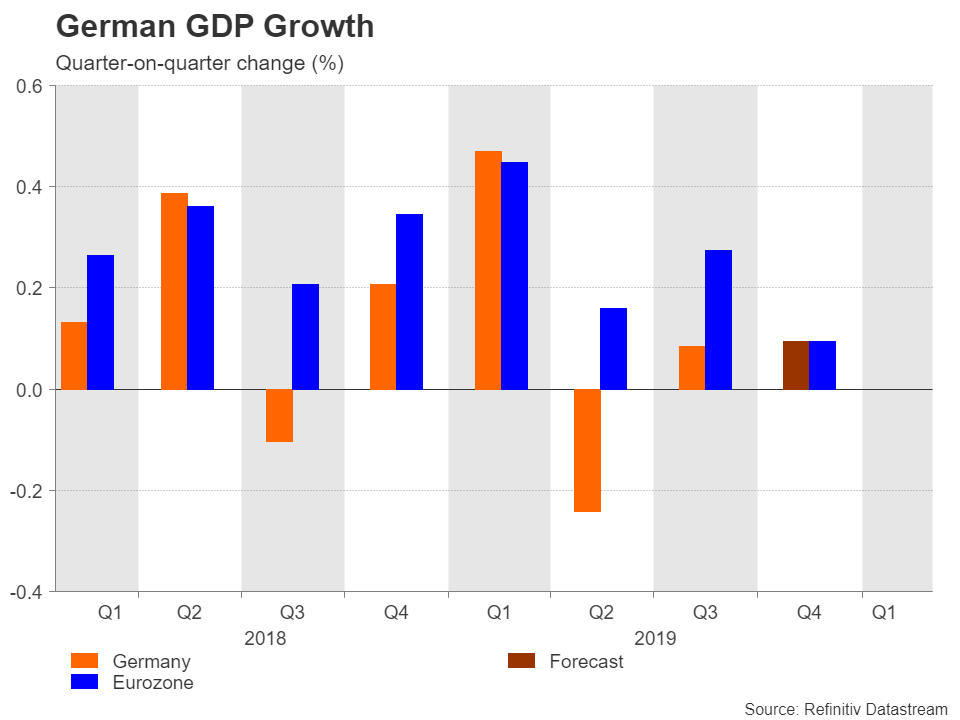 However, with recent data pointing to a slump in industrial activity in December, there’s a greater risk of a negative surprise than a positive one in the actual print. Industrial production plunged by 3.5% month-on-month in December – the worst decline since the financial crisis. The situation is only expected to get worse in the coming months as the outbreak of the coronavirus in China has not only dampened demand for overseas goods but also disrupted supply chains, causing a serious headache for German manufacturers with operations in China or relying on components from Chinese suppliers.

Big risks on the horizon

Looking further afield in 2020, even if the latest virus epidemic proved to be a short-lived episode, the risk of a trade war with the United States still hangs over the Eurozone, with Germany potentially being the worst hit from any auto tariffs should President Trump decide to impose them. Brexit also remains unresolved and with the UK’s Johnson pursuing a looser future relationship with the European Union than his predecessor, German businesses face the threat of losing some market access to the UK as well as the possibility of having a ‘Singapore-style’ economy on their doorstep.

With monetary policy almost fully exhausted, most analysts see fiscal policy as the only tool that can lift Germany and the rest of the Eurozone out of the doldrums. Proponents of a looser fiscal stance have been gaining traction lately and last week the European Commission began proceedings to overhaul the EU’s Stability and Growth Pact – the agreement that sets out the tight spending rules. However, any changes are not likely to be agreed upon until next year at the earliest and it remains to be seen whether EU politicians are capable of coming up with any meaningful reforms.

The prospect of an imminent German fiscal stimulus package is also slim, especially following the sudden resignation of the ruling CDU party’s leader, which looks set to create a political vacuum for months to come. Germany’s best chance of a fiscal boost now lies either in a possible shakeup in the ruling coalition or snap elections being called, both of which could hand the balance of power to fiscal doves.

Without any progress on the fiscal front or an upturn in global growth, German manufacturers face a grim future as the country’s enormous car industry has been caught off guard by the rise of electric cars as well as the scale of the diesel emissions scandal. This negative sentiment is certainly reflected in the euro, which this week breached the $1.09 level to tumble to 4-month lows.

Should the German GDP data reinforce the gloomy outlook, there will be little stopping the euro from declining further, with the 161.8% Fibonacci extension of the December upleg being the next target for the bears at $1.0818. However, any encouraging sign that Germany’s manufacturing downturn is bottoming out or even some unexpected resilience in consumer spending in Q4 could help the euro stabilize. An upside reversal in euro/dollar could see the pair attempting to reclaim the $1.10 handle.