The world’s leading online retailer will announce its earnings for Q3 after Wall Street’s closing bell on Thursday. Profit margins are expected to have been squeezed, amid rising costs. Yet, perhaps most of the attention could fall on the performance of the firm’s cloud business. Beyond that, any comments by management about the recent antitrust investigations could also be crucial for the stock’s reaction.

The e-commerce colossus is set to report earnings per share (EPS) of $4.60 in Q3 according to Thomson Reuters forecasts, which if met would represent a 20% decline from the same quarter a year ago. Yet, revenue is expected to clock in at $68.8bn, marking a healthy 21.6% increase compared to the prior-year quarter. The divergence implies that the firm’s profit margin is shrinking, mainly due to soaring costs.

Most of this cost increase is owed to Amazon investing heavily in one-day shipping as part of its Prime service, shortening that timeframe from two days previously. The company indicated back in April that this move would cost roughly $800 million, but recent reports suggest that the actual cost may have been higher.

The other segment that will attract attention is Amazon’s Web Services (AWS), or in other words its cloud-computing business. Amazon is leading the cloud industry in terms of market share, and its cloud service has been growing at a spectacular pace in recent years – a major pillar behind much of its overall profitability. Alas, growth is forecast to have slowed, with the cloud business expanding ‘only’ by 36.4% from the year-ago quarter, compared to an astonishing 45.7% previously. 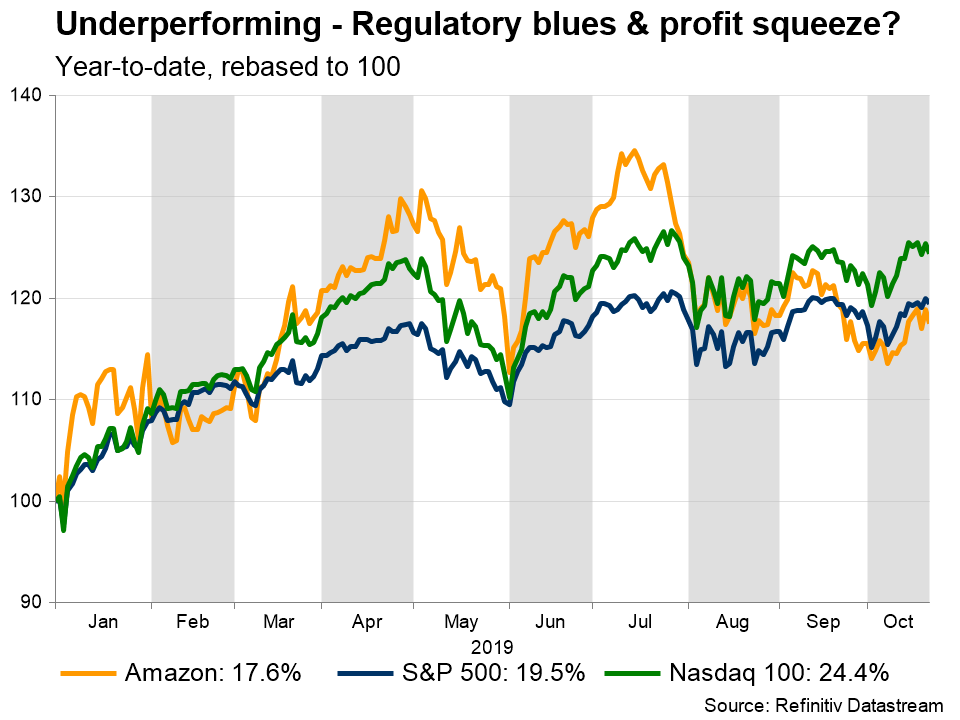 To be fair though, this is still a very healthy number, and it’s only natural for a maturing business to slow as it gets bigger. Make no mistake, this is probably the most important segment to watch given its outsized role in generating profits for the firm, having earned more than half of Amazon’s operating income in Q2.

Beyond earnings, the other deciding factor for Amazon’s stock will be the guidance by the company’s management during the conference call with analysts. In particular, most of the attention could fall on regulatory issues following the recent US antitrust investigation against Amazon, which is scrutinizing whether the e-commerce giant is using its massive market share to stifle competition.

The executives may be questioned on how they plan to deal with this inquiry, especially in light of recent reports suggesting that the firm might even consider breaking up Amazon – between its retail business and AWS – before regulators force any breakup.

Amazon’s stock has posted decent gains so far this year, gaining 17.6% year-to-date, but it’s still behind the broader market. The S&P 500 is up 19.5%, while the Nasdaq 100 has climbed by a whopping 24.4%. Amazon is a constituent stock in both of these indices.

The likely culprits behind this underperformance are the firm’s regulatory hardships and the slow squeeze in profit margins, both of which cast a dark cloud over the stock.

Taking a technical look at Amazon’s stock, strong earnings or upbeat guidance by management could see the price break above the 1,800 handle and challenge the 1,850 hurdle initially.

Disappointing results though, may send the stock below the 1,750 area, towards the 1,685 neighborhood.