All of Wall Street will be watching Apple’s earnings report after the US market closes on Tuesday. Besides the headline numbers, investors will focus on the guidance by the firm’s management about the next quarter, and especially on their expectations for the new iPhone. As for the stock, it has gained substantially this year, but remains relatively attractive from a P/E perspective, at least compared to its FAANG rivals.

The California-based tech titan is expected to report earnings per share (EPS) of $2.10 when it announces its fiscal third-quarter results, which would mark a decline of 10.3% from the same quarter last year. The most optimistic analyst submitting their forecasts to Thomson Reuters expects $2.20, and the most pessimistic one $1.79. In terms of sales, the iPhone maker is anticipated to report essentially flat revenues from a year ago.

While these numbers appear worrisome, it’s worth noting that a slowdown is only natural as a company matures, especially one as big as Apple. Most of this weakness seems to be a function of disappointing iPhone sales, which account for roughly half of Apple’s revenue, as the higher price tags seem to have made consumers more reluctant to upgrade their older devices – especially in foreign markets like China.

All eyes on new iPhone guidance

While the actual earnings figures will determine the initial reaction in Apple’s stock price, the overall direction may depend more on the guidance by the company’s management in the conference call with analysts. Investors will pay special attention to any hints about the new iPhone 11, which may be unveiled in September. 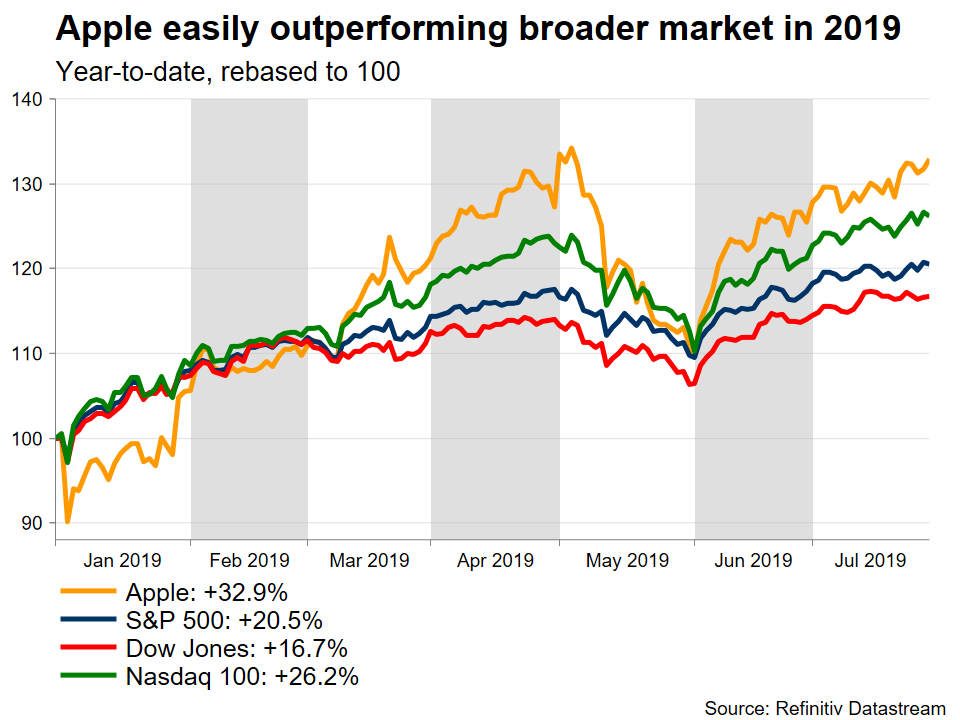 Some are worried, because this line of iPhones will probably be the last that doesn’t support 5G, which means several customers may prefer to wait until 2020 to upgrade their devices and get 5G compatibility. Not to mention that the resale value of these devices may be lower than usual owing to this.

There are two more subjects the executives will probably be questioned on. The first relates to the recent antitrust investigation launched by the Justice Department on whether big tech companies are acting as monopolies. In theory, this could even lead to a break up of America’s biggest tech companies, so it will be interesting to see whether CEO Tim Cook and his lieutenants view this as an existential threat to their firm.

Beyond that, the issue of potential tariffs on its products produced in China will likely come up, considering a recent tweet from the US President that Apple won’t be granted any relief from tariffs for parts used in its Mac Pro. While some of this may be a negotiating ploy by Trump, aimed at bringing some of Apple’s production back to America, it still represents a risk to the company’s top line.

Valuation is ‘pricey’, but still much ‘cheaper’ than competitors 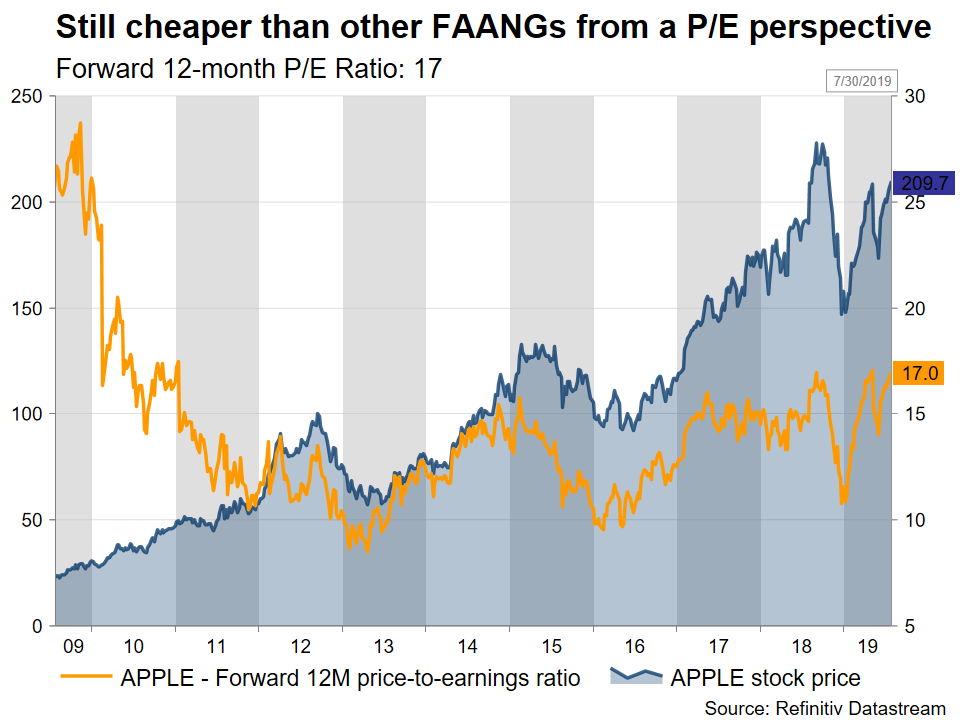 While the stock’s gains may suggest Apple has become ‘expensive’, the share is still much more attractive than most of its competitors. Let’s take a look at a common valuation metric, the 12-month forward price-to-earnings (P/E) ratio. This number indicates the dollar amount someone would need to invest in order to receive back one dollar of earnings and hence, the higher it is, the more “expensive” a stock is considered to be.

Apple’s stands at 17.0, which is relatively elevated to be sure, but far lower than Facebook’s 23.9 or Amazon’s 63.95, to name just a few of the main players. This implies that the share may still have room to run higher overall, especially if guidance on the next quarter is optimistic.

Potential advances in Apple’s stock, for instance on upbeat guidance by Cook, may encounter initial resistance near 210.70, with an upside break opening the way for 215.3.