US Nonfarm payrolls will probably put on another spectacular show this Friday at 12:30 GMT, mirroring a blossoming economic recovery as the ultra-easy monetary and fiscal policies combined with the rapidly growing vaccination rollout are brightening up the landscape out of the health crisis. This euphoria, however, is already well priced in, and the jobs data alone may not be a source of volatility for the dollar this week as the next question that arises is when and how the Fed could begin to gradually withdraw the huge stimulus injections.

According to forecasts, the US economy created 978k new jobs in April, slightly more than the 916k added in March, pressing the unemployment rate to 5.8% from 6.0% previously.

As the inflation insecurity continues to scare consumers despite the Fed’s calm tone, the focus will also fall on the average hourly earnings, but the numbers could be artificially shaped by the composition effect, and therefore may not show the actual picture. To provide an explanation, the gauge is expected to face a sharp decline from 4.2% to -0.4% year-on-year, which under other circumstances would be a serious negative development. However, given the resumption of business activities in the US, the figure will likely reflect the increasing participation of low-paid workers in the labor market, which will consequently pressure the average wage growth lower. Hence, the wage data may not affect market sentiment until the employment slack is fully recovered. 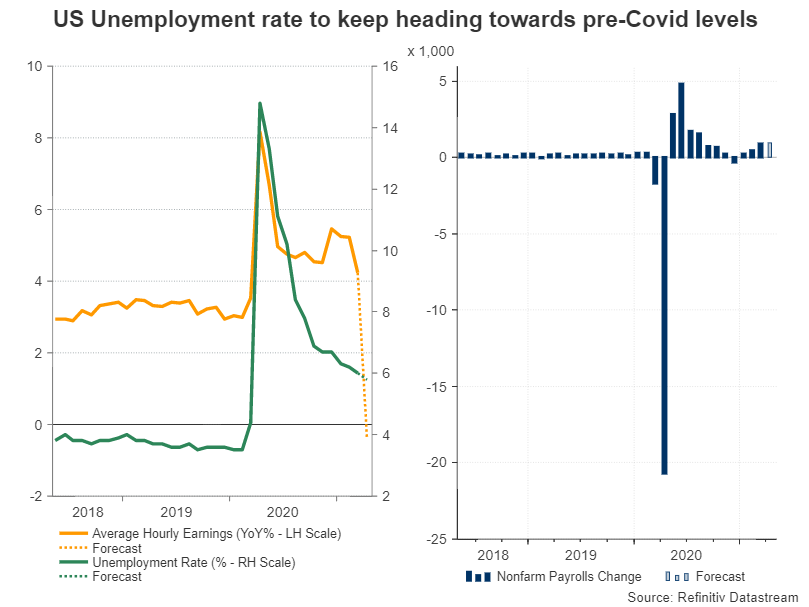 Tightening plans matter the most

Overall, the employment report will be another sign of things getting back to normal, although the unemployment rate has still some way to go to reach pre-pandemic levels, and more importantly, reflect full employment conditions which the Fed aims to achieve. Until then, the central bank has pledged to remain super accommodative, keeping interest rates steady at record lows at least through 2023, and the pace of its asset purchases stable.

But the US Treasury Secretary and former Fed chairwoman, Janet Yellen, did some damage to the Fed’s pledge for low interest rates on Tuesday, admitting the need for a modest increase in borrowing costs to prevent the US economy from overheating. She immediately rephrased her comments in a later interview with Wall Street Journal, saying higher rates are not something she predicts or recommends, and inflation may not be a problem, though this translation is a bit conflicting with her initial remarks, revealing that the monetary tightening could be indeed a puzzling topic for the US and could become a challenging issue as some key central banks start to trim their bond purchases.

Nevertheless, Yellen’s attempt to call for higher rates has hit a wall for now, as the final decision rests with Chair Powell and the rest of the Fed policy committee, who have clearly messaged that they will let the economy run hot before changing course. Whether the Fed chief will keep his promise remains to be seen, however for now the certain thing is that markets are still sensitive to any inflation and tightening news as reflected by the latest sell-off in tech stocks following Yellen’s headlines and last week’s pickup in the 10-year Treasury yields. Therefore, the dollar could see several rounds of volatility as long as the Fed delays its tightening plans and rate hike headlines pop up.

Even though another upbeat employment report may not be any big surprise for the dollar, from a technical perspective, dollar/yen seems to have some bullish fuel in store as the pair managed to rebound within the upward-sloping channel last week, having avoided a close inside the Ichimoku cloud too. A decisive close above 109.73 is likely required for an acceleration towards the channel’s topline seen within the 110.65 – 110.95 resistance zone. Slightly higher, the area between 111.35 and 112.21 could be another tough obstacle before attention turns to the 113.70 – 114.00 region last seen in 2018.

Alternatively, a downside reversal could seek immediate support near the 109.00 level, where the 23.6% Fibonacci retracement of the 102.58 – 110.95 up leg, the surface of the cloud, and the channel’s bottom are placed around. Failure to rebound here could see a negative extension towards the 38.2% Fibonacci of 107.78.