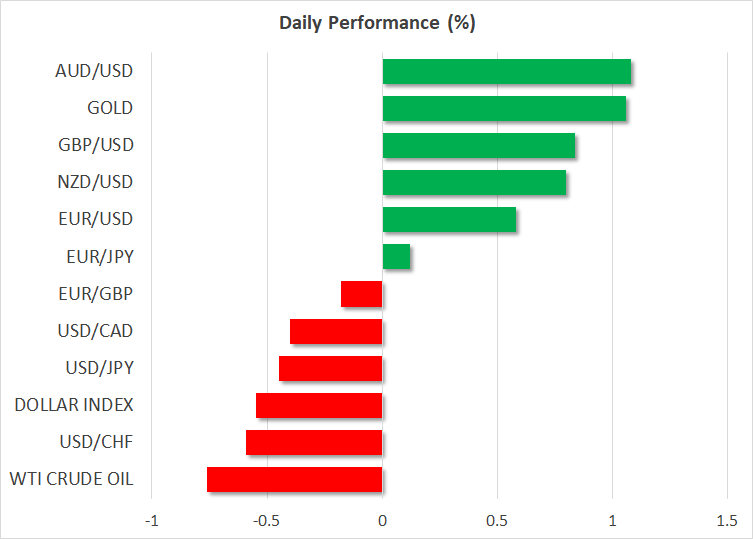 The US dollar underperformed against all the other major currencies on Tuesday as weak data added to hopes that the Federal Reserve may need to slow its aggressive pace of interest rate hikes.

US single-family house prices fell sharply for the second consecutive month in August, and even more than in July, as higher mortgage rates continued to weigh on demand for housing. Also, the Conference Board consumer sentiment index for October slid by more than anticipated amid rising concerns about inflation and a possible recession next year.

Although the report revealed that households remained willing to buy high-priced items, it also offered signs that the Fed’s interest rates hikes are starting to weigh on the labor market. Thus, consumers’ intentions to buy big-ticket goods may fade as the wounds of the economy deepen. After all, the economy may not feel the full effect of the Fed’s cumulative tightening until next year.

Still, the exact effects are unknown, but market participants hold the view that recession risks are growing, and weak data add credence to that view. Considering also reports that the Fed may slow its interest rate increases as soon as in December, they have brought down their rate-path projections.

According to the Fed funds futures, investors are still fully pricing in a 75bps hike for next week’s gathering, but they are split as to whether officials will proceed with a 50 or 75bps hike in December. As for the terminal rate, while they raised it to 5% last week, market participants now see it at around 4.9%, with a full quarter-point cut still priced in by November next year. However, even with the cut in the equation, the market sees the rate being in line with the Fed’s median projection for 2023.

Therefore, with no more Fed hawkishness to be priced in by the market, more data adding to the narrative of slower rate increases from December onwards could continue to weigh on the greenback. That said, the Fed is still the most hawkish central bank among the majors, therefore a trend reversal discussion seems premature for now. Investors may get more clarity on the Fed’s intentions from next week’s gathering.

The pound took the most advantage of the greenback’s slide yesterday as new UK Prime Minister Rishi Sunak pledged to lead the economy out of an economic crisis. Jeremy Hunt, who was reappointed as finance minister, is scheduled to officially present a budget plan on October 31, and it remains to be seen whether investors will be satisfied.

However, the pound is not only driven by politics. After the political storm has settled, the probability for a full-percentage point hike by the BoE has dropped to around 35%. A slower rate path by the Bank may not be indicative for taming double-digit inflation and thus, traders may remain more concerned with regards to the performance of the UK economy and not only. Due to the UK’s twin deficit, the pound has developed strong risk-linked characteristics, and thus, anything reviving fears over a worldwide recession could also weigh on the currency.

After the pound, it was the turn of the aussie to beat the dollar as the larger-than-expected acceleration in Australian inflation during the Asian session today may have encouraged some traders to steepen somewhat their RBA rate-path projections. However, following the 25bps hike at the prior gathering, most investors still believe that officials will continue with quarter-point increments only.

The loonie also gained decently against the US dollar, with the BoC decision scheduled for later today. In contrast to the RBA, investors believe that this Bank will not slow down now. They largely expect another 75bps. So, if this is the case, all the attention is likely to fall on signals and hints with regards to policymakers’ future plans.

Wall Street extended its recovery yesterday, despite the disappointing economic data out of the US. Actually, disappointing data may have been working in favor of the stock market recently as they add to speculation of a less aggressive Fed moving forward. Also, with analysts setting the earnings bar very low, 74% of the S&P 500 companies that have already reported beat expectations, helping indices to move further away from their recent lows.

That recovery may continue for a while longer, but with major central banks still raising interest rates to bring inflation to heel and recession fears still elevated, the recovery may not last for long. Even with expectations of a less aggressive Fed being cheered by the markets, the likelihood of a global recession remains high as the effect of the already-implemented aggressive tightening worldwide has not been fully transmitted into the global economy.