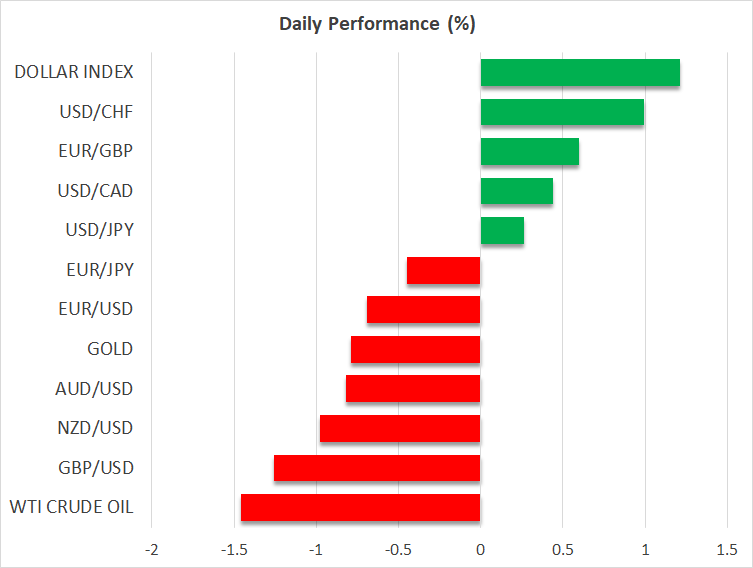 Thursday was a resurrection day for the US dollar, which finished the day higher against all the other major currencies and continued marching upwards today as well.

The driver was Fed Chair Jerome Powell, who appeared more hawkish than expected, especially after the FOMC statement confirmed the market’s latest narrative. The Committee delivered its fourth consecutive 75bps rate hike as was widely anticipated, while the statement offered hints that smaller rate increments may be on the cards for the months to come.

That said, at the press conference, Fed Chair Powell said that it is very premature to be thinking about pausing, and added that data since the latest meeting suggests that the terminal level of interest rates may be higher than previously estimated. In other words, the 4.6% median projection for 2023 will most likely be revised up in the next dot plot in December.

In the aftermath of the decision and the conference, investors remained divided between 50 and 75 basis points with regards to the size of the December hike, but they lifted their terminal rate to near 5.15%, and although they are still pricing in a cut by the end of 2023, they now see interest rates ending the year at around 4.85%, 25bps higher than the Fed’s latest projection.

All this raises the question of how much more hawkishness can still be priced in. Yes, Powell managed to add some extra layers yesterday, but there may be a limit to how much more hawkish he can appear from now onwards. Therefore, even if the dollar continues to strengthen, the pace may be slower than it has been up until now.

Upbeat jobless claims today and a strong employment report tomorrow could help the greenback climb higher, but on the first sign that points to further easing in inflation or deeper economic wounds, the dollar may slide notably. That said, other major central banks are also hinting at slower rate increases and thus the Fed could maintain the lead in terms of hawkishness. This keeps any trend reversal discussion off the table for now.

Wall Street was also affected by Powell’s remarks, with all three of its main indices finishing their trading session well into the red. The tech-heavy Nasdaq lost the most – more than 3% - enhancing the view that monetary policy and interest rates remain on the top of investors’ agendas. This is also evident by the rebound in US Treasury yields. Even if there is another round of stock buying in the near future in case of renewed hopes of slower rate hikes, concerns over a worldwide recession and sky-high inflation could keep any advances limited.

Today, the central bank torch will be passed onto the Bank of England. This will be the first meeting after the budget turbulence, but with the announced fiscal measures being scrapped and Liz Truss stepping down, expectations of a super-sized 100bps increment have eased. The consensus of both investors and economists is now for 75bps. Nonetheless, with Rishi Sunak’s government delaying its Autumn budget statement to November 17, there is the chance for BoE officials to play a safer card and hike by only 50bps, as the effects of future fiscal policy to the economy are difficult to be estimated now. Adding further credence to this view is the fact that the Bank itself is projecting a recession by the end of the year, so are disappointing PMIs for October.

Even if policymakers decide to go with 75bps due to inflation rebounding back above 10%, they may hint at slower hikes from December onwards, as the bleak economic outlook does not warrant more aggressive increments.

Both these scenarios may prove negative for the pound, with the former having the potential to throw it off the cliff. For the pound to rally and maintain any decision-related gains, the Bank may have to signal that more triple hikes are in the pipeline, a case that seems unlikely. 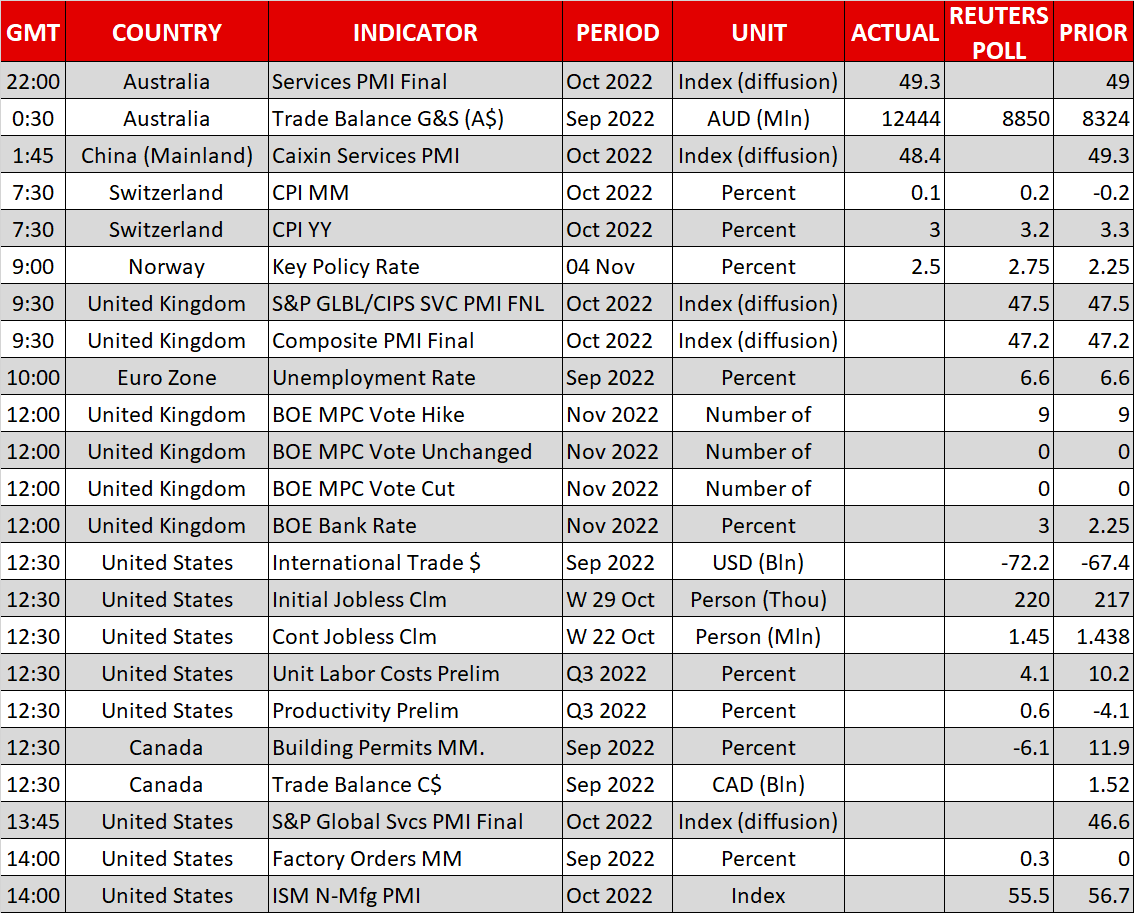