Is the UK economy one step closer to recession? – Forex News Preview

Following last week’s dovish triple hike by the Bank of England, pound traders are now likely to turn their attention to the first estimate of the UK GDP for Q3 due out on Friday at 07:00 GMT. Expectations are for the Office for National Statistics to confirm the BoE’s forecast of a contraction, but the big question is, how will the outcome affect market speculation with regards to the Bank’s future course of action and how will the pound react?Investors expect smaller hikes by the BoE

At last week’s gathering, the BoE decided to raise interest rates by 75bps, the largest hike since 1989. However, the language accompanying the decision was much more dovish than expected, with officials warning of a prolonged recession and noting that interest rates are unlikely to match the peak implied by market pricing.

On top of that, two policymakers voted for a smaller increment at that meeting, which combined with the accompanying warnings, prompted market participants to bring down their implied rate path. Before the meeting and after the budget drama was over, investors had lifted their terminal rate to as high as 5.25%, but today they see it at around 4.63% in August 2023. They are also assigning around an 80% probability for a 50bps hike in December, with the remaining 20% pointing to a 75bps increment. They foresee only one more hike of the same size in February, while they are expecting quarter-point increments thenceforth. 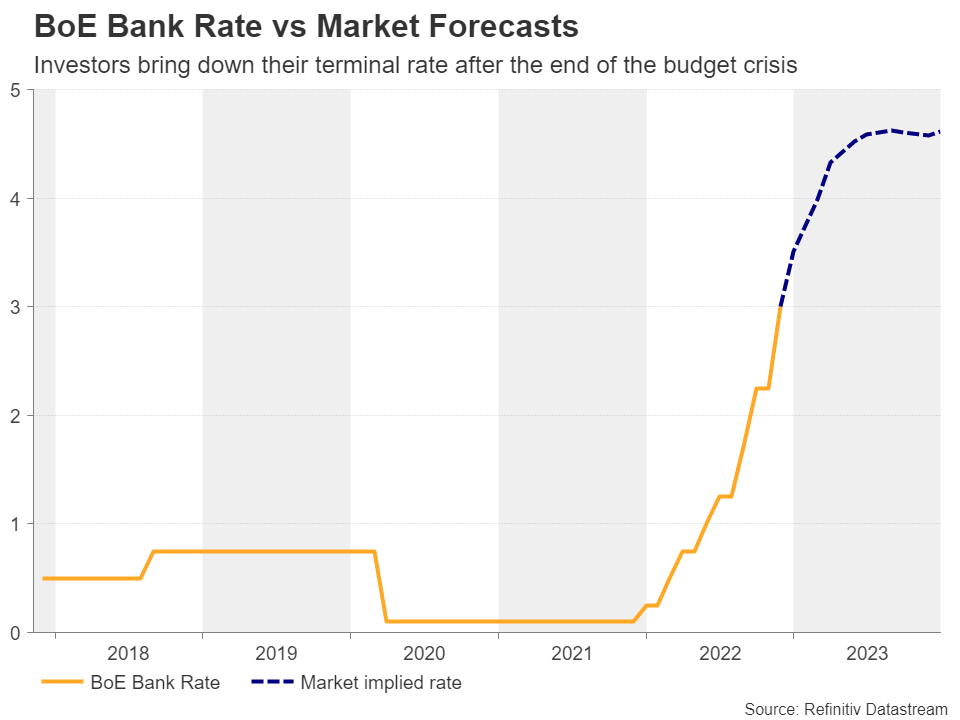 An economic contraction is broadly anticipated

So, with all that in mind, traders may now shift their attention to the first estimate of the UK GDP for Q3. The consensus is for a 0.5% contraction, in line with the Bank’s view of a recession at the end of the year. More specifically, the Bank projected that the economy would decline by around 0.75% over the second half of 2022 and continue to contract throughout 2023 and the first half of 2024, marking the longest downturn on record.

Conditional upon Friday’s number matching economists’ consensus, a contraction of at least 0.25% would be needed in Q4 for the Bank’s own forecast to materialize. In other words, Friday’s number may be well factored into the markets and therefore it is unlikely to hurt the pound much. After all, the PMIs have already set the stage for a negative growth rate in Q3. The composite index fell below the boom-or-bust zone of 50 in August and slid even further in September. For the pound to fall instantly, a negative surprise may be needed, as it could raise fears that the economic wounds are unfortunately deeper than expected. 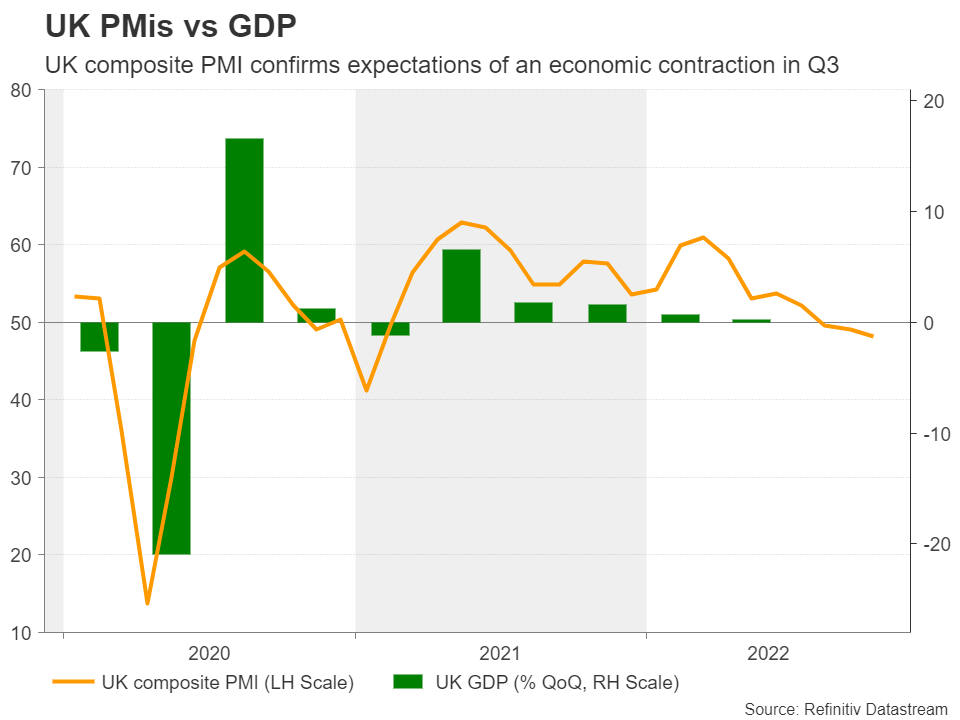 Nonetheless, even if the actual number matches the consensus and the pound does not instantly tumble, its path of least resistance possibly remains to the downside. The BoE seems to have shifted its focus from sky-high inflation to the bleeding economy, and a slower rate path while inflation is running at double digits is far from an encouraging development. What’s more, the government’s budget announcement on November 17 is expected to include some significant fiscal tightening, which implies downside risks to the Bank’s already lackluster projections, as officials were not able to include the potential impact in their November calculations.

The big question though is whether the pound will suffer more than the US dollar in the short run. Although the Fed sounded more hawkish than anticipated at last week’s gathering, the unexpected rise in the unemployment rate for October on Friday revived speculation over a slower rate path in the US. The overstretched fall in the dollar suggests that the Fed’s hawkishness may already be largely priced in, and that anything pointing to a pivot coming earlier than previously estimated may weigh further on the dollar.

However, with the Fed still considered as a more hawkish central bank than the BoE, any further declines of the US dollar against the British pound may stay limited and short lived. On top of that, renewed global growth fears could add fuel to the safe haven’s engines and perhaps work against sterling, whose link to the broader market sentiment has strengthened recently, despite its correlation with the S&P 500 still being weaker than other traditional risk-linked currencies, like the aussie, kiwi and loonie. 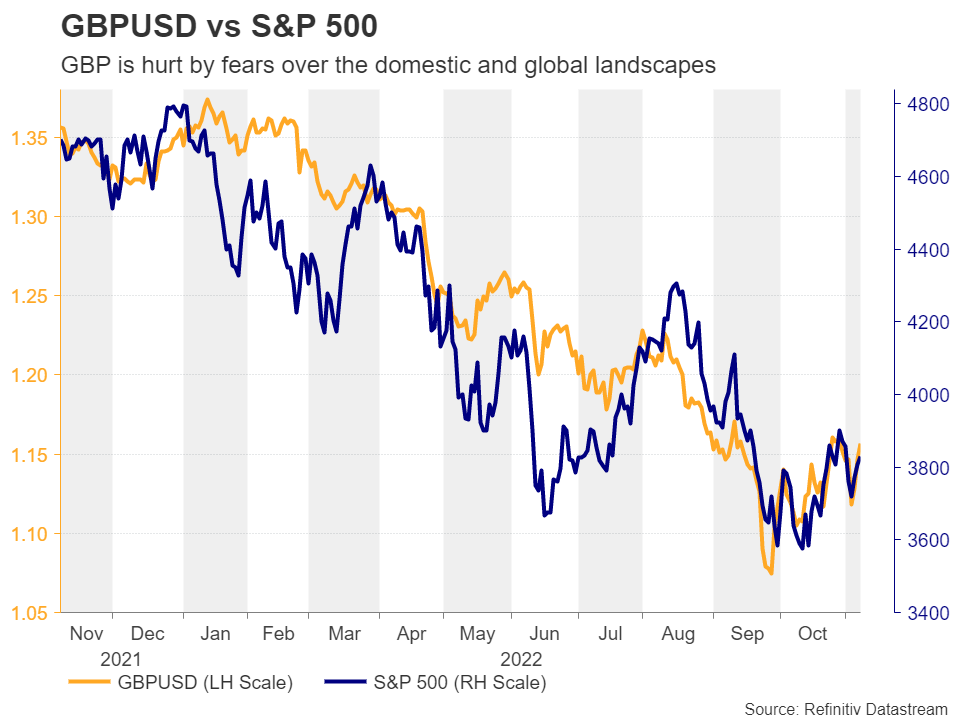 From a technical standpoint, pound/dollar remains below the downtrend line drawn from the high of February 23. The pair hit that line on Tuesday and pulled back somewhat on Wednesday. That said, although this still points to a bearish outlook, a break below the 1.1145 barrier may be needed to signal a trend resumption. Such a break would confirm a lower low on the daily chart and may initially pave the way towards the low of October 12 at 1.0920, where another dip could see scope for extensions towards the 1.0535 territory.

On the upside, the move supporting the case for a potential bullish reversal may be a break above the 1.1635 barrier, marked as resistance by the highs of October 26 and 27. This would not only validate the break above the aforementioned downtrend line but also confirm a higher high on the daily chart. The bulls could then get encouraged to climb towards the psychological round number of 1.2000 and if they are not willing to stop there, the rally may continue towards the 1.2295 area.