Despite the UK economy contracting by less than expected in Q3, investors continued to scale back their BoE rate-hike bets. However, they may have to reexamine those bets next week, as the economic agenda includes the employment report for September on Tuesday at 07:00 GMT, the inflation numbers for October on Wednesday at the same time, and the Autumn Statement on Thursday. The time has yet to be confirmed, but such announcements tend to be delivered at around 12:30 GMT.Economy contracts by less than expected

The first estimate of the UK GDP revealed that the economy shrank by only 0.2% in Q3, which means that a contraction of more than 0.55% may be needed in the last three months of the year for the BoE’s forecasts of a 0.75% contraction during H2 2022 to materialize. Yet, investors dragged their rate-path projections lower. The probability for a 50bps hike at the December gathering remained near 80%, but the implied terminal rate was lowered to 4.47% from 4.6%. 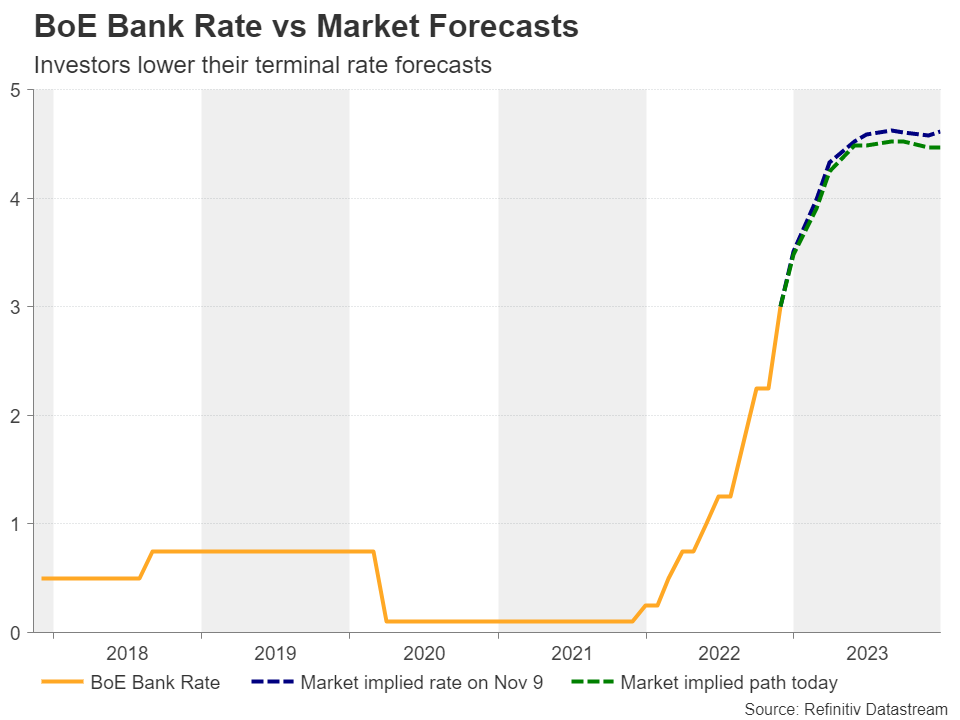 Maybe investors paid more attention to the bigger-than-expected monthly contraction for September, which may have been interpreted as setting the stage for a much worse fourth quarter. Nonetheless, that number may have been exacerbated due to the standstill in economic activity around the time of the funeral for Queen Elizabeth.

Jobs and inflation data up next

On Tuesday, the jobs report is forecast to show that the unemployment rate held steady at 3.5% in September and that average weekly earnings excluding bonuses have accelerated. Nonetheless, with an inflation rate at 10.1% during that month, real wages likely stayed well into the negative territory and disposable incomes at record lows. 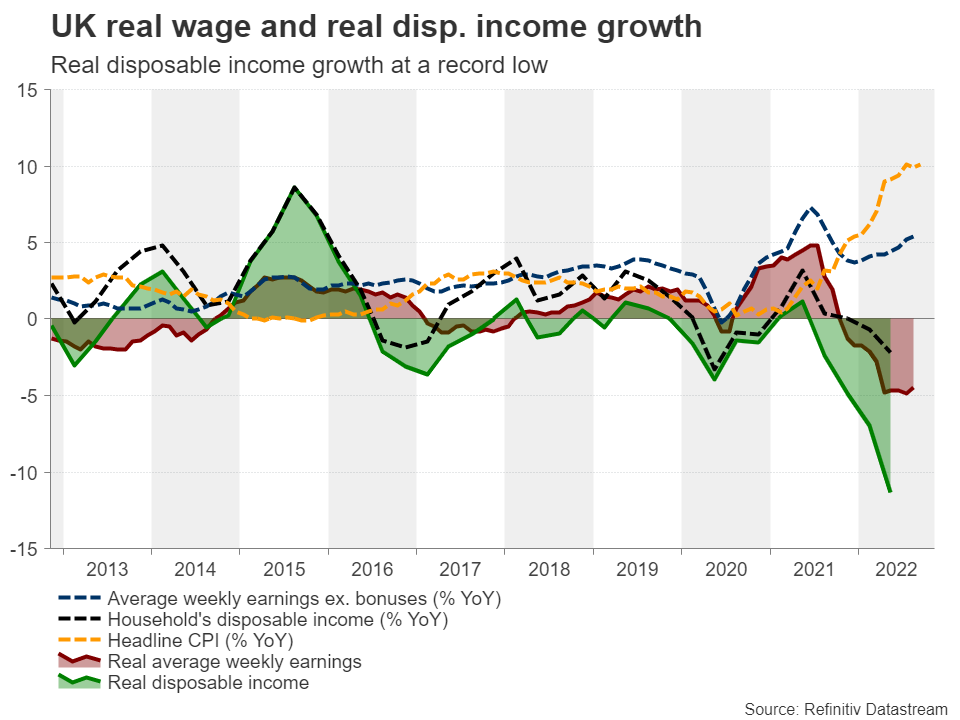 Therefore, investors’ concerns over a worst Q4 are more than reasonable, and Wednesday’s inflation data have the potential to enhance them. The headline rate is expected to have continued to rise, hitting 10.8% y/y, though the core rate is expected to have ticked down to 6.4% from 6.5%. This implies that the surge in the headline rate may be due to volatile items like food and energy, and the recovery in oil priced during October corroborates that view. 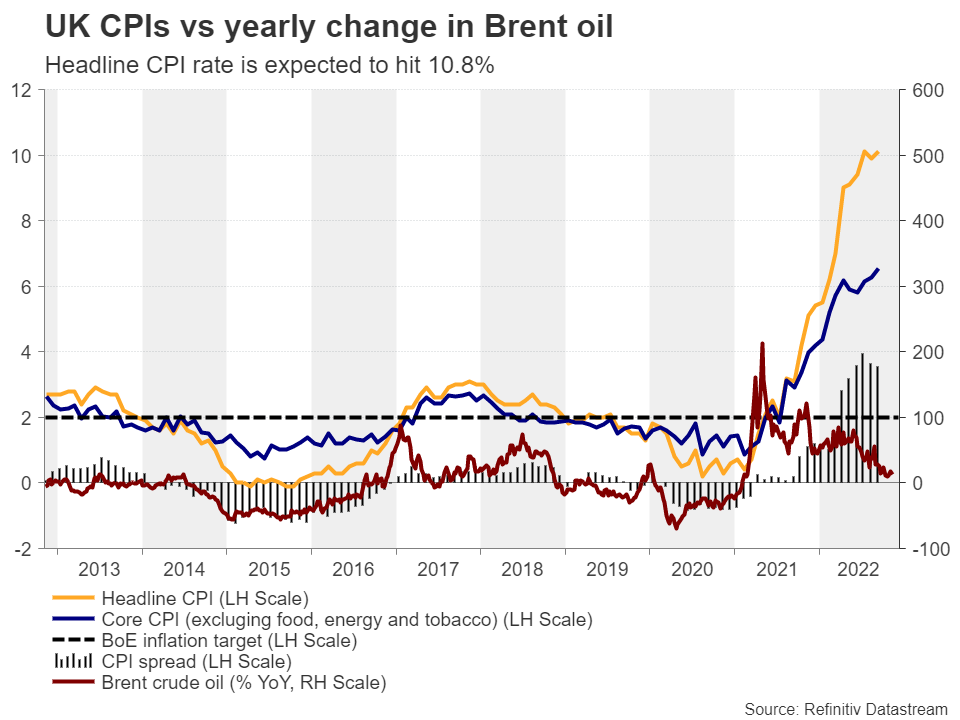 Oil prices may continue to rise in case of a harsh winter, but with the BoE appearing to have shifted its focus more on the wounded economy now rather than to inflation, accelerating consumer prices are unlikely to prompt investors to ramp up their rate-hike bets, especially just a day ahead of the budget announcement.

On Thursday, Chancellor Jeremy Hunt will unveil the government’s plan for tackling the nation’s budget deficit, which is expected to have now widened to 50bn pounds form around 44bn at the end of June.

The new agenda will most probably contrast with the plans announced by Kwasi Kwarteng, as abolishing the deficit may require spending cuts at levels of austerity, like in 2010. It has also been reported that Hunt will announce a limit of 2% to public sector pay increases and a freeze to various tax thresholds, including income tax. Considering how high inflation is, the former will result in further declines in real wages, while the latter will drag more people into higher-rate tax brackets as their nominal salaries increase. With regards to corporate taxation, Hunt has already confirmed that the rate will rise to 25% in April next year. This implies downside risks to the BoE’s already lackluster projections, as officials were not able to include the potential impact of the fiscal agenda in their November calculations.

What does all this mean for the pound?

As for the pound, expectations of next week’s events keep the risk of another round of selling in the foreseeable future firmly on the table, despite pound/dollar rising above a medium-term downtrend line yesterday. That was more due to the dollar weakening on the US inflation data rather than the pound strengthening. Yes, the pound’s link to the broader market sentiment has strengthened this year due to the UK’s twin deficit, but its correlation with the S&P 500 remains weaker than other traditional risk-linked currencies, like the aussie the kiwi and the loonie.

So, with the Fed still being considered a more hawkish central bank than the BoE, and the risk of a new flare up in global growth concerns anything but vanished, any further advances in the pair may stay limited.

For now, a combination of more weakness in the dollar due to increasing hopes of a less aggressive Fed, and further improvement in the broader market sentiment could help pound/dollar appreciate for a while longer. The break above the downtrend line drawn from the high of February 23 may allow advances towards the psychological round number of 1.2000 and if the bulls are not willing to stop there, then the rally may continue towards the 1.2295 area. 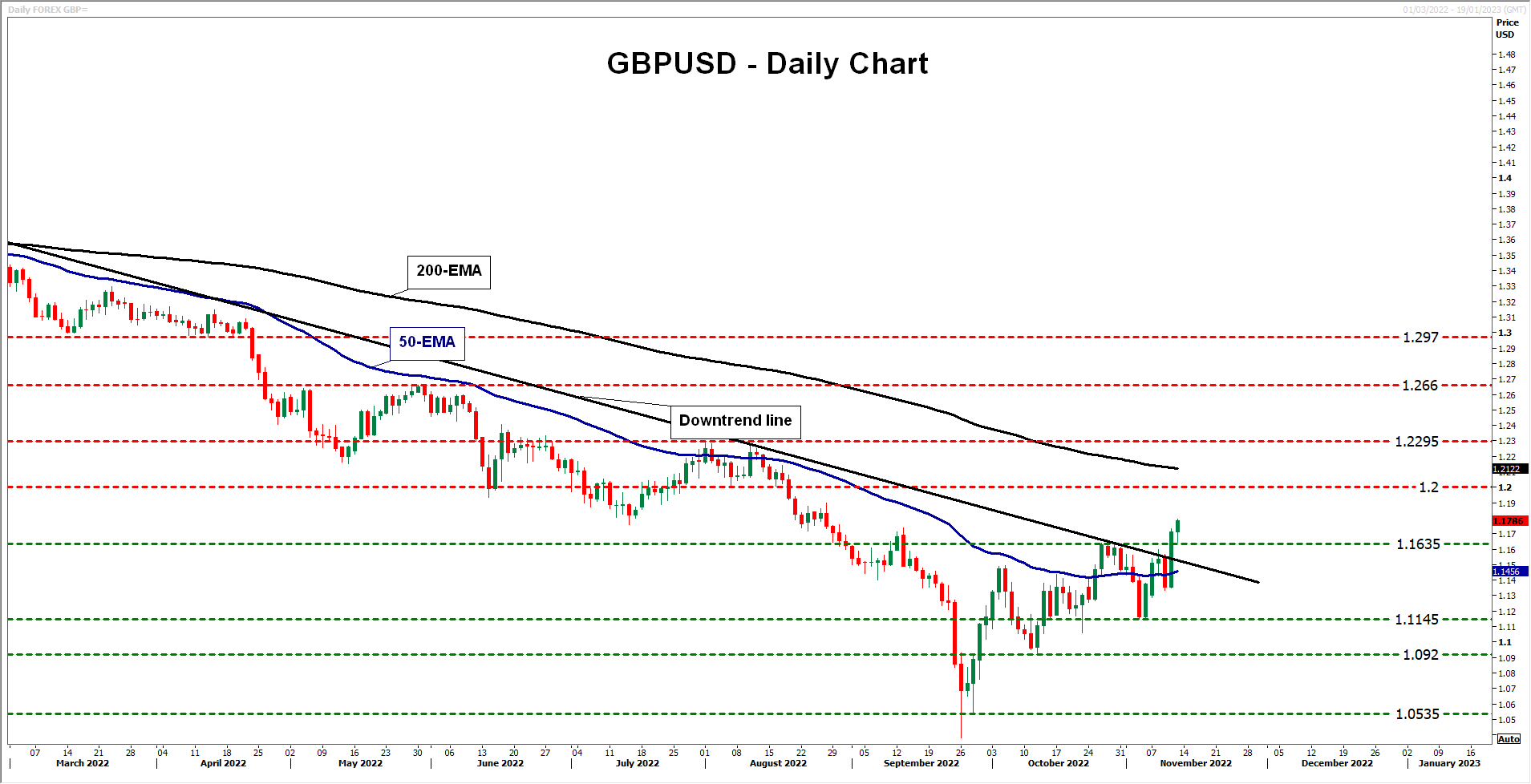 On the downside, a break below the 1.1145 barrier may be needed to signal that the prior downtrend is back in force. That move would confirm the pair’s return below the downtrend line and may initially target the low of October 12 at 1.0920. Should that zone get breached as well, the bears may set the stage for extensions towards the 1.0535 territory.