The Organization of the Petroleum Exporting Countries (OPEC) and its allies led by Russia, will meet in person in Vienna on Wednesday to set the output targets for November. Crude prices have exhibited the longest downtrend since the pandemic outbreak, prompting the group to come to the rescue with a sizable production cut.  A production cut may come at the wrong time

Concerns for an imminent recession in the months ahead and a strengthening dollar overshadowed supply shortages in oil markets, pressing crude prices below the key $85 level for the first time since January. OPEC exporters, however, have recently revived bullish bets after increasing the possibility for a 500k to 1mln bpd production cut following the approval of a smaller 100k bpd reduction early in September. A more aggressive 1.5mln decline is also on the radar. 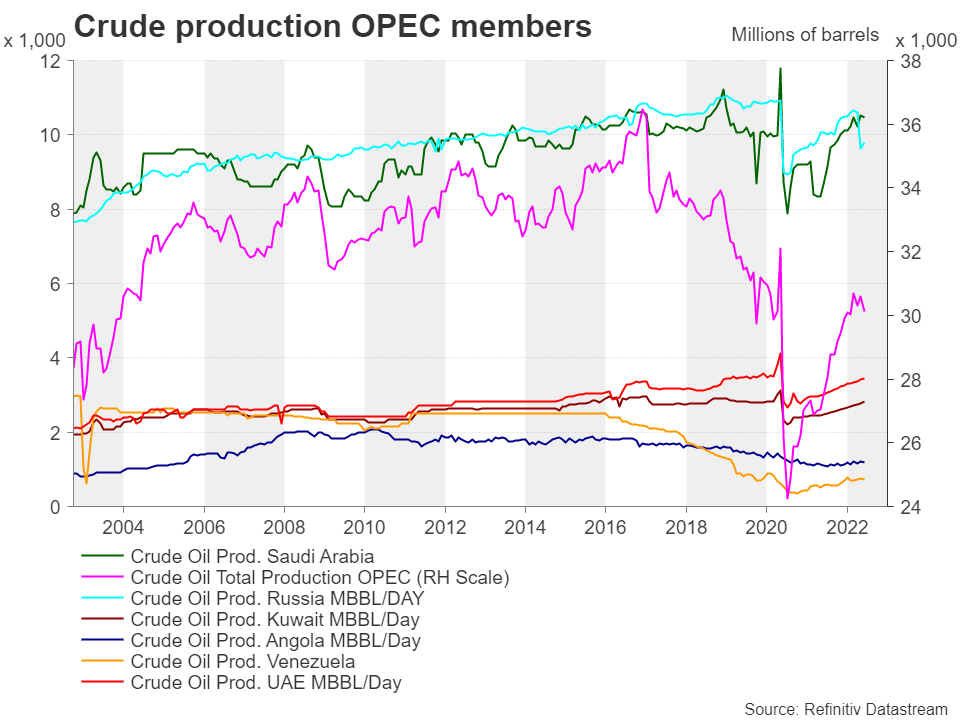 While such a decision would serve the interest of oil producers, whose finances are challenged by rising production costs and underinvestment in the sector, central banks could see their already eroded ability to control inflation further collapsing. A cocktail of high inflation and slowing economic growth could be toxic for households at a time when bond markets are suffering from lack of liquidity and government debt obligations are stretched to their limits after the huge pandemic stimulus. The messy politics in the UK are an example of how time-consuming and complicated any fiscal decisions could become. Hence, raising interest rates is currently viewed as the only tool that central banks have at their disposal to fight inflation.

The announcement could also arrive at the wrong time for the US government ahead of November’s midterm election that will decide whether Democrats will keep their majority in Congress. Saudi Arabia’s output reduction this month, which canceled September’s increase of the same size, showed that the Saudis are not willing to do any favors for President Biden, especially as the US government is trying to revive the broken 2015 nuclear deal with its long-time enemy Iran.

The European Union, which is still struggling to reach a consensus over a G7 cap on Russian oil prices ahead of the October 7 meeting, may not be happy either. Note that a scheduled ban on Russian oil imports due in December could further worsen energy supplies in the region.

What could boost oil prices?

Of course, the size of the production cut will matter for markets. Several OPEC countries have already been missing their output targets over the past months, with Russia coming up short of 1mln of its 11mln bpd quota in August according to the Paris-based International Energy agency (EIA). Additional sanctions later this year could make production even more difficult for Moscow. Therefore, if the Saudis want to keep Russia as a key member in the organization next year, they might go big on output reductions. Besides, for investors to take any cuts seriously in the first physical gathering, which the Russian Deputy Prime Minister Alexander Novak will also attend, the agreement should involve an unexpected substantial cut.

From a technical perspective, the latest rebound in WTI oil futures is still fragile as long as the price keeps trading below the descending trendline and the $85.55/barrel level. A decisive close above that bar could trigger an exciting rally towards the $95 -$97 territory, while a step higher would open the door for the critical $100 number, last seen at the end of July.

It’s worthy to note that the EIA is expected to report a solid rebound in US weekly crude inventories on the same day, likely sending some conflicting signals to the market.