The Reserve Bank of New Zealand will hold its last policy meeting of the year on Wednesday (01:00 GMT) and another rate hike is on the cards. After five consecutive 50-basis-point rate increases, policymakers will be pondering an even larger move in December, as, far from the economy cooling, inflationary pressures are at risk of boiling over. With the US dollar under strain from speculation about the Federal Reserve pivoting in the opposite direction, the New Zealand dollar could enjoy a substantial boost should there be a hawkish surprise.Too hot

Throughout this global tightening cycle, the RBNZ has been at the forefront of the race to raise borrowing costs. However, whilst some sectors of the economy, such as housing, have started to feel the weight of the multiple rate hikes, things are heating up on other fronts.

The labour market in particular has yet to respond to the official cash rate being at the highest in more than seven years.  The unemployment rate – at 3.3% – is the lowest in decades thanks to ongoing labour shortages that have pushed up wage growth to the highest on record. Additionally, after a poor second quarter, consumer spending has picked up again in recent months.

More importantly, inflation in the third quarter was considerably hotter than expected, with the annual rate of CPI easing only marginally to 7.2% - well above the RBNZ’s target band of 1-3%. But the worries about simmering inflationary pressures don’t stop there. Inflation expectations according to the RBNZ’s own survey have started to creep up again, likely raising alarm bells within the Monetary Policy Committee.

All this has led investors to price in higher odds of a 75-bps increase in November versus a 50-bps one, assigning a probability of about 60%. Looking at the RBNZ’s last set of economic projections from August, a 75-bps increment seems unlikely as the cash rate was seen peaking slightly above 4%. Raising by 75 bps would immediately take rates above this terminal level to 4.25%. It would also involve quite a significant revision to overall forecasts in the updated quarterly Monetary Policy Statement due to be published the same day. 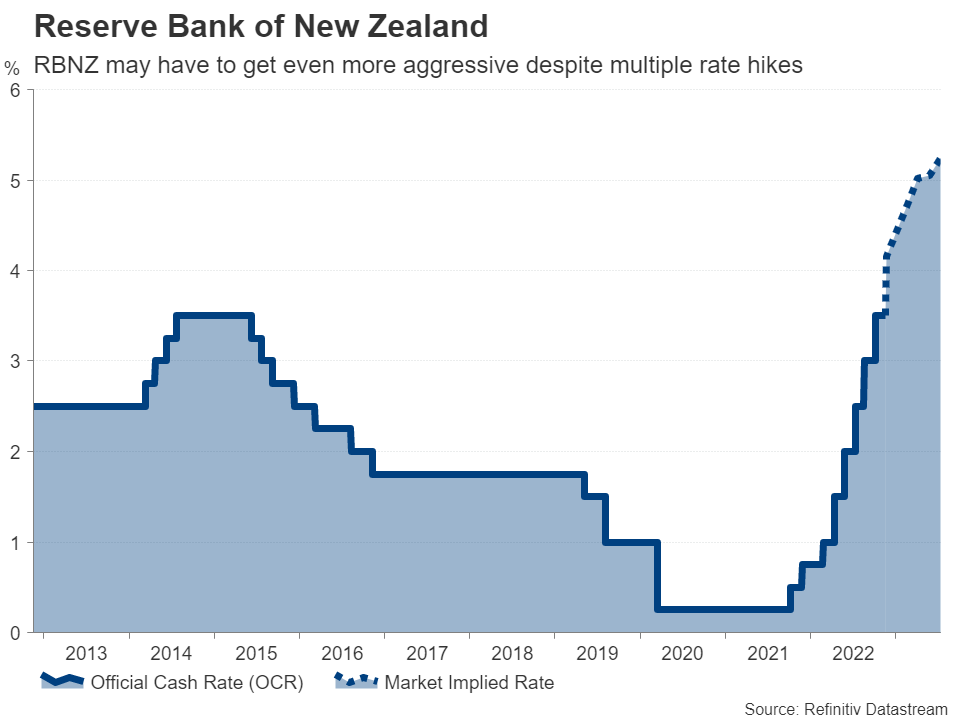 The RBNZ might not be comfortable taking such a big leap in one go, especially as it wasn’t that long ago when Governor Adrian Orr was describing the tightening cycle as “very mature” to signal that there aren’t many rate hikes left to go. Having said that, the October meeting minutes did reveal that the decision was between 50 and 75 bps. Furthermore, the next meeting after this isn’t until February 2023, so policymakers might not want to risk playing it safe when the data picture has altered so dramatically.

A hawkish boost for the kiwi

Either way, the projection of the terminal rate looks set to be revised higher, and even if there is only a ‘smaller’ hike of 50 bps, it would almost certainly be accompanied by a hawkish statement. Hence, there is scope for the New Zealand dollar to extend its recent gains, which for now, appear to have stalled just below the $0.6200 level.

Given that a 75-bps increase isn’t fully priced in, the kiwi could overtake the 38.2% Fibonacci retracement of the 2021-2022 downtrend to meet its 200-day moving average (MA) slightly above $0.6300 in the event of such an announcement. But further gains, specifically towards the August highs and the 50% Fibonacci of $0.6487, would depend on how high the Bank sees the adjusted terminal rate to be.

However, this is also what could trigger a selloff. Should the RBNZ predict the cash rate peaking below the market implied terminal rate of around 5%, the kiwi could be knocked all the way down to the 50-day MA at $0.5823.

It’s worth keeping in mind, though, that now that the US dollar appears to have potentially topped out, the upside swings could well be greater than the downside ones.