The month of October will mark a year since the Reserve Bank of New Zealand (RBNZ) launched its tightening campaign. Despite the nonstop rate increases, the central bank will not abandon its mission against inflation as the impact has been negligible so far, with traders largely expecting another half percentage point rate hike on Wednesday at 02:30 GMT.RBNZ to raise rates by 50bps

A delayed lift of travel restrictions, China’s zero-covid policy, and a darkening global economic outlook overshadowed the impact of the RBNZ’ stimulus reduction, squeezing the risk-sensitive kiwi by more than 10% over the past year.

What is worse is that a plummeting domestic currency is making imports more expensive, adding more fuel to inflation that is already hot. Although the RBNZ was the first among the major central banks to enter the tightening era, increasing its benchmark rate abruptly from 0.25% to 3.0%, inflation continued to accelerate dangerously like elsewhere in the world. The latest quarterly CPI report for the three months to June showed consumer prices rising at the fastest pace in 32 years at 7.3% y/y and far above the central bank’s 1-3% target.

The next inflation update will be on October 18 but given evidence from abroad, there is not much room for doubt that consumer prices kept growing at an unacceptable pace, or at least eased at a snail pace during the third quarter. Hence, as investors have largely priced in, the RBNZ will probably stay on its hawkish path this week, announcing its fifth 50 bps rate hike in a row. Such an action would put interest rates above the Fed funds rate. 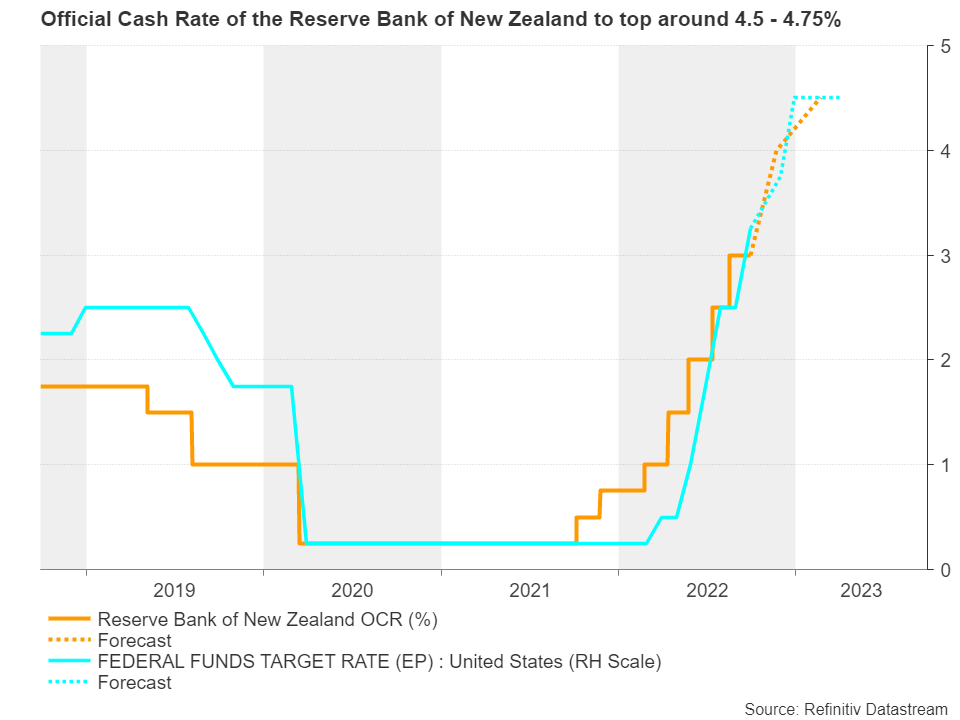 The depreciation in the currency has come under the spotlight after Japan’s FX intervention. However, a similar response in New Zealand is less likely. Firstly, the RBNZ has a far smaller share of foreign reserves than its US, Asian and European peers. Secondly, other major currencies have been falling aggressively too, but the kiwi is still relatively cheaper against the greenback, the euro and the pound, keeping exports and tourism competitive in international markets.

Monetary divergence with the Fed, and hence the spread between the US and New Zealand 10-year government bond yields, is narrow. Therefore, unless a sudden change in global risks, and particularly in the slowing Chinese economy, happens, the central bank’s policy guidance could be the only factor to set the mood in kiwi/dollar in the shor term.

Futures markets are currently foreseeing three more 50bps rate increases to be delivered by February 2023 and expect the central bank to gear down to normal 25bps rate hikes afterwards. Strikingly, the RBNZ chief Adrian Orr admitted that although some work still needs to be done, the “tightening cycle is very mature”, increasing speculation that the central bank could soon change course.

On the other hand, a majority of economists including the Westpac Banking corporation, have recently revised their 2023 rate forecasts upwards to 4.5-4.75% and higher than the RBNZ’s projected terminal rate of 4.10%, citing the resilience in the economy and the potential secondary inflation pressures that may subsequently emerge. Indeed, the surprisingly strong Q2 GDP growth numbers, the robust labor market, and the improvement in profit expectations and business activities suggest that the economy can still afford higher-debt service costs.

However, sectors such as the property market will need careful monitoring given the high household debt to income if rates keep spiraling higher. According to Westpac, nationwide housing prices dropped by 9.0% since last November. and the flattening trajectory in retail spending is already signaling more softness ahead. Note wage growth is still sluggish when compared to inflation. 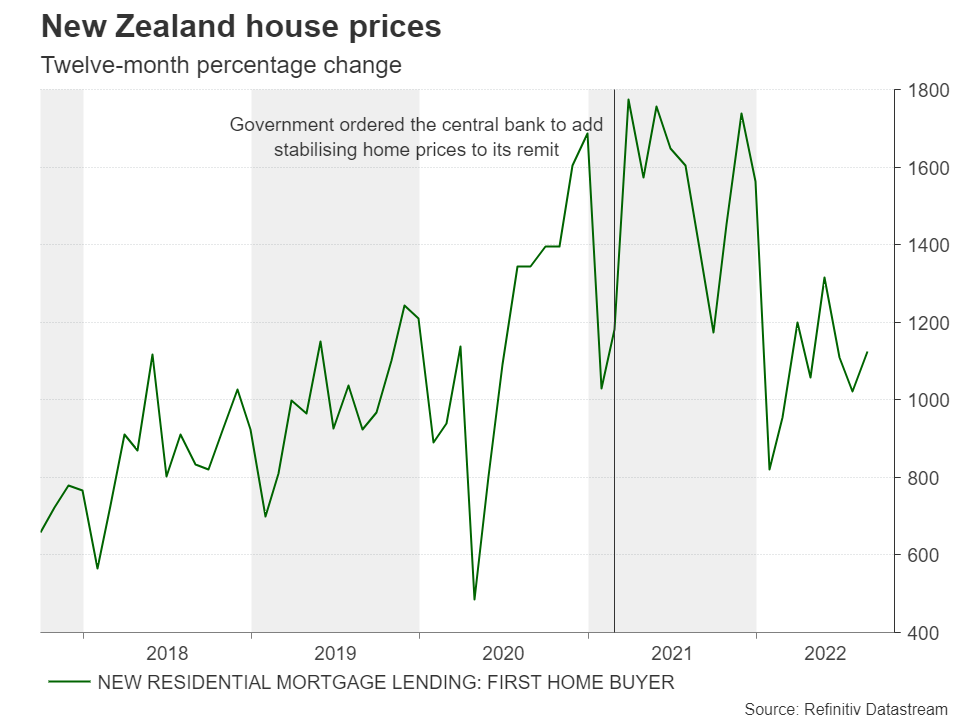 Hence, with investors getting conflicting signals about the path of monetary tightening in 2023, the kiwi might appear vulnerable to any tweaks in the RBNZ’s language. If the central bank sees the terminal rate peak higher than previously thought and plays down the risk of a cooling housing market, kiwi/dollar could extend its recovery above the nearby resistance of 0.5724 and towards the 20-day simple moving average (SMA) at 0.5900. Higher, traders will look for a break above the 0.6000 mark.

Alternatively, if policymakers show concerns about the global economic conditions, judging that monetary tightening has done enough for inflation to stabilize over the next year, the pair will push for a close below the crucial support of 0.5627. The 2020 trough of 0.5468 may come on the radar in the event of steeper declines.