After the Thanksgiving downtime that generated some further weakness for the greenback, investors will be looking for fresh direction from the barrage of US economic data that will be dominating the agenda in the coming week. The latest payrolls report will be the main attraction along with PCE inflation readings. CPI data out of Australia, the Eurozone and Switzerland as well as Canadian GDP numbers will be important too, while OPEC’s monthly decision will be another one to watch amid speculation of an output increase.Jobs report to headline busy week for the dollar

Hawkish language from the Fed may have put a halt to the US dollar’s slide but it wasn’t enough to spur much of a recovery. With the November jobs report and a raft of other key indicators on the way, it could go either way for the greenback, although the risk seems tilted more to the downside.

The week will initially get off to a slow start, with only home prices and the consumer confidence index drawing some attention on Tuesday. On Wednesday, the second estimate of third quarter GDP growth might show a small upward revision. Other releases will include the ADP employment report – considered a precursor to Friday’s official numbers, the Chicago PMI and pending home sales.

After the surprisingly soft CPI readings, investors will be watching on Thursday to see whether the Fed’s preferred inflation metric of the core PCE price index will also cool off substantially. It is forecast to rise 0.3% month-on-month in October versus 0.5% previously. Included in this report are the personal income and spending figures. 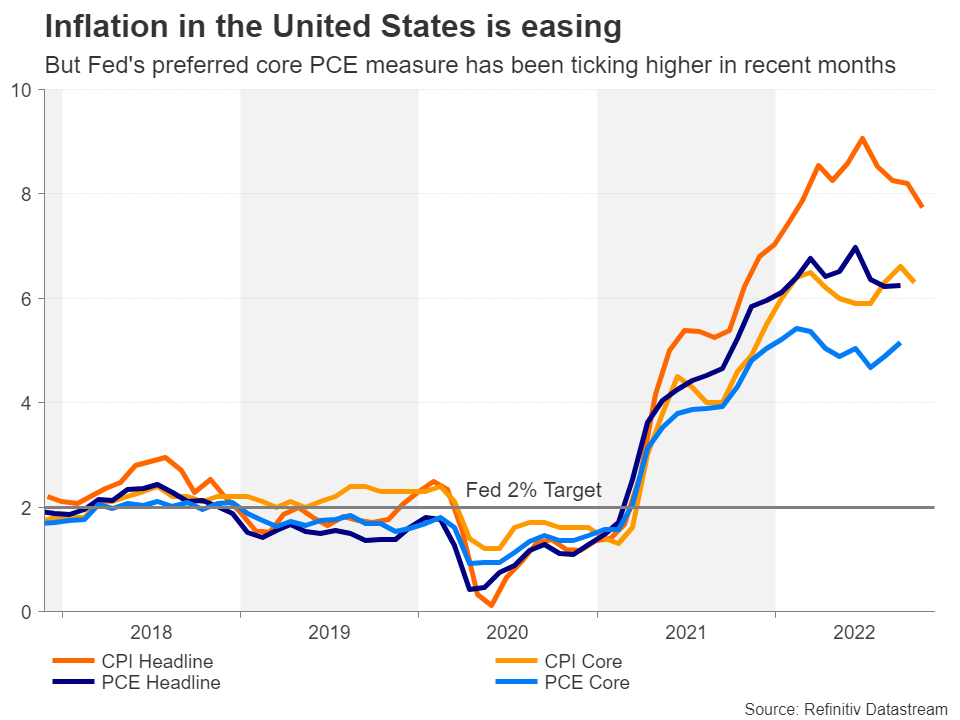 Just as crucial on Thursday will be the ISM manufacturing PMI. The alternative S&P Global manufacturing PMI slipped below 50 in November but according to the forecasts, the ISM measure will avoid a contraction by easing to 50.0.

However, any recession worries from potentially weak data are likely to be more pronounced if Friday’s nonfarm payrolls report disappoints too. The US economy is expected to have added 200k jobs in November, down from 261k in October. The unemployment rate is projected to inch up slightly to 3.8%, while a slight monthly moderation is anticipated in average hourly earnings growth. 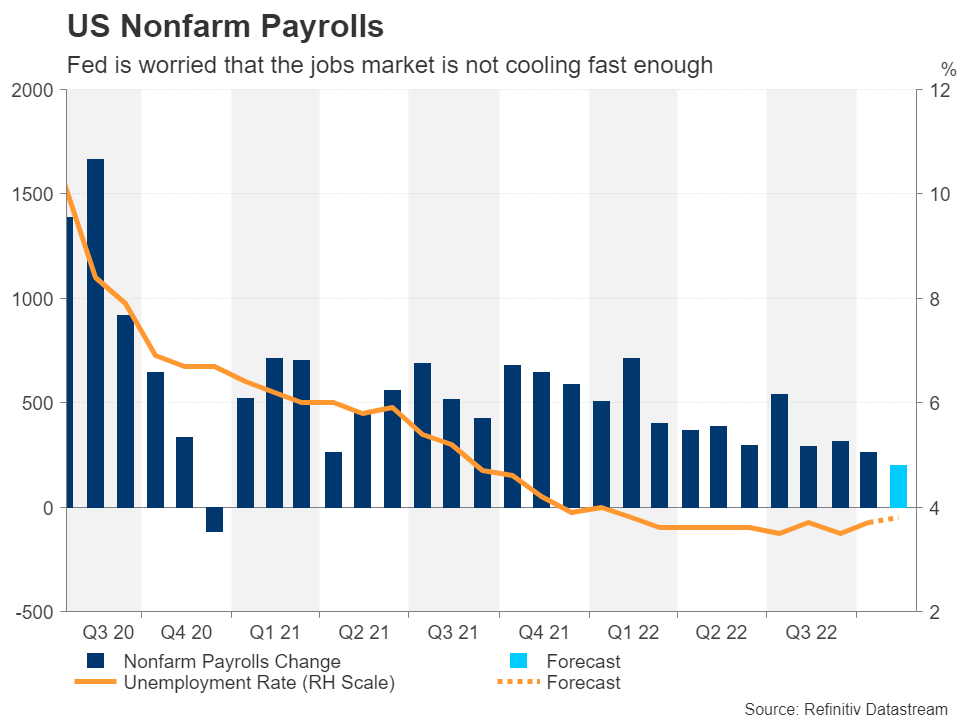 At this point, where inflation appears to have peaked and Fed officials are seemingly in agreement with each other that the Fed funds rate should reach about 5% in this tightening cycle, any bad news on the economy is good news for risk appetite. Signs that the jobs market as well as the broader economy are slowing would not only eliminate the threat of a further hawkish shift, but it would also increase the odds of a rate cut sooner rather than later.

This could be detrimental for the dollar, though it would probably boost sentiment on Wall Street.

Inflation may finally be on the way down in America, but in the euro area, it hit double digits in October. The flash estimates for November out on Wednesday should reveal whether price pressures continued to simmer in November. The headline rate of the harmonized index of consumer prices (HICP) is expected to ease slightly to 10.4% y/y. The core rate that excludes food and energy prices is also forecast to edge lower, dropping 0.1 percentage point to 6.3%. 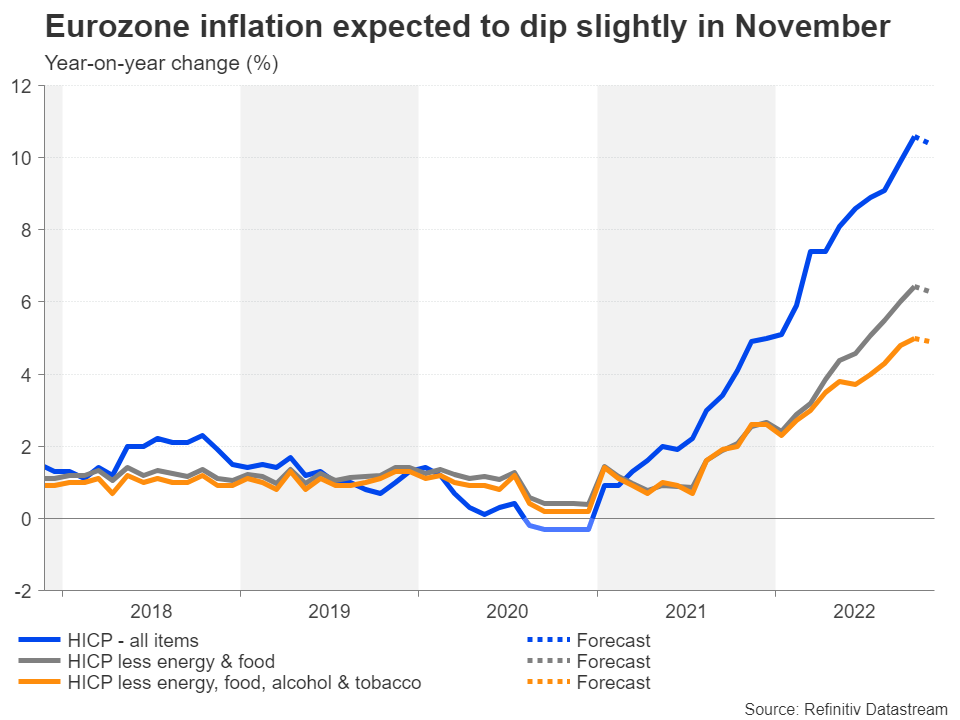 With policymakers at the European Central Bank still undecided about the size of the next rate rise when they meet on December 15, stronger-than-expected figures would increase the probability of a 75-basis-point hike versus a 50-bps one.

However, even in the event of a very hot print, it’s doubtful how many additional 75-bps increases the ECB will be able to carry out amid growing signs that the Eurozone may have already entered a recession. After the latest flash PMI surveys pointed to another contraction in economic activity in November, investors will be watching the economic sentiment indicator on Tuesday for further signs of a deteriorating economic backdrop, while the producer price index on Friday may attract some interest too.

Nevertheless, the euro could extend its latest gains, at least in the interim, should investors up their bets of a 75-bps increase.

As the ECB ponders its next move, the Swiss National Bank also has to decide how big to go in December. But Switzerland isn’t plagued with the same high inflation problem like the rest of Europe is, with its consumer price index running at a ‘mere’ 3% annual clip in October. 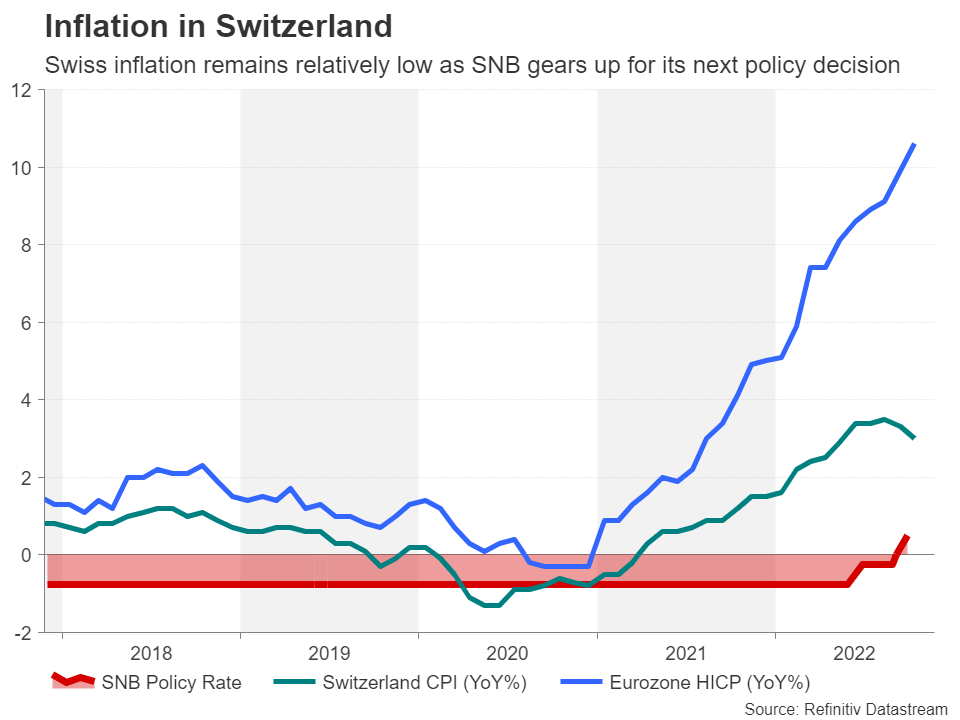 Neither does the country face the same recession risk, having recorded quarterly growth of 0.3% in the second quarter.

Both data points will fall under the microscope next week. The GDP estimate is up first on Tuesday and the inflation numbers will follow on Thursday.

The Swiss franc has rallied strongly on the back of the dollar’s retreat, but the rebound hit a wall at 0.9355 per dollar. Hotter-than-expected CPI figures might be what it takes to tip the franc over that barrier as the SNB would more likely hike rates by 50 bps than 25.

Conflicting risks racking up for the loonie

Another country reporting GDP data next week is Canada, though this may be eclipsed by the employment stats that are due on Friday. GDP growth likely slowed in the third quarter Tuesday’s data is expected to reveal. But a bigger priority for the Bank of Canada is the tight labour market, which added a whopping 108k jobs in October. Should employment again rise at such a rapid pace in November, policymakers might have a rethink about further reducing the pace of rate increases.

The BoC hiked rates by only 50 bps at its last meeting and investors think a 25-bps increment is the most probable outcome at the December meeting.

The Canadian dollar could enjoy a significant lift if the job numbers help move those odds in favour of a 50-bps hike. However, there are downside risks for the loonie from the meeting of OPEC and non-OPEC countries on Thursday. There have been some reports suggesting that Saudi Arabia might push for an increase in oil production at the upcoming gathering on concerns that the EU’s price cap on Russian oil exports due to come into effect next month might cut off Russian supply from the market. 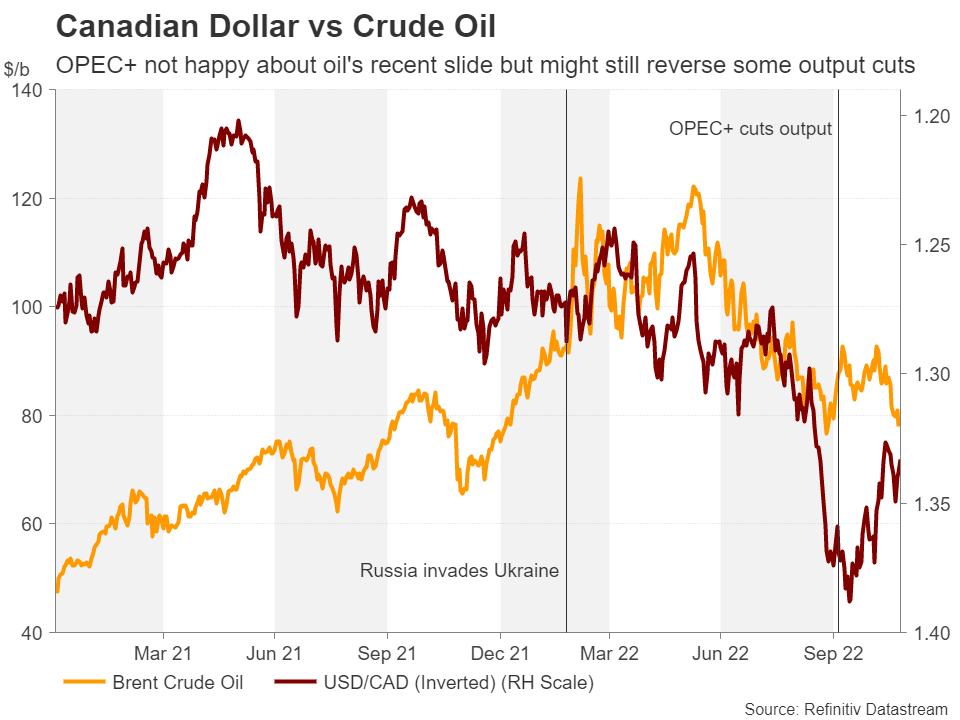 If the alliance does agree on raising output, oil-linked currencies such as the loonie might take a hit should oil prices plummet in response, although dollar weakness would go some way in mitigating the losses and risk assets in general would react positively to the prospect of lower energy prices.

In Australia, the Reserve Bank is in a similar predicament and the highlight for the local dollar will be Wednesday’s inflation figures. Australia has only just started reporting monthly CPI readings and these could be vital in shaping the steepness of the policy path in the coming months.

Quarterly data on capital expenditure will be monitored too on Thursday but traders will probably be paying more attention to Chinese indicators a day earlier when the manufacturing PMIs are due.

The Australian dollar has enjoyed a decent rally against the greenback despite disappointment that China is not about to abandon its zero-Covid policy anytime soon. But if the PMIs point to more pain for the Chinese economy, the aussie’s rebound might start to lag its peers amid the somewhat uncertain demand outlook for Australian exporters.