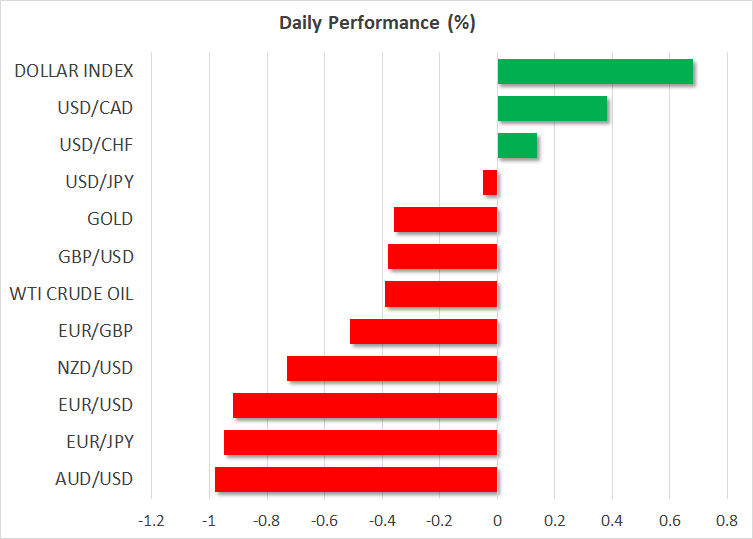 Recession worries took a bit of a backseat at the start of July as the selloff paused for breath, but the panic crept back in on Tuesday as a fresh surge in natural gas prices upset the uneasy calm. Shares in Europe reversed earlier gains, mirroring US futures, which also floundered after a positive start and are now pointing to modest losses when traders return from the Independence Day holiday, although Asian markets closed mostly higher.

Stocks globally were pummelled in June on heightened recession fears as central banks stepped up their fight against burgeoning inflation and cracks began to appear in the world’s largest economy. Investors have since been on high alert for more clues to help them re-assess their tightening expectations for the Fed and other major central banks.

There was some glimmer of hope this morning that the global growth outlook may not be so dire after all. China’s services PMI by Caixin/S&P Global jumped to 54.5 to an 11-month high in June as virus restrictions were lifted in Shanghai and Beijing. Japan’s services sector also recovered strongly, enjoying the best growth in eight and a half years.

But the boost to sentiment didn’t last long even as European PMIs were revised higher in the final readings. It wasn’t an entirely rosy picture in Asia either as investors remain concerned about a spike in Covid cases in China’s eastern province of Anhui, and this is likely what weighed on the CSI 300 index today, which bucked the regional trend to close lower.

Hope of a turnaround?

There was some speculation, however, about a possible shift in China’s zero-Covid policy after the quarantine time for travellers entering the country was cut by half to seven days.

Meanwhile, there were also encouraging signs from the White House that President Biden is closer to reaching a decision about whether to cut some of the tariffs on Chinese imports imposed by his predecessor, Donald Trump. The Biden administration is fast running out of time and options to alleviate the cost of living crisis for American households ahead of the mid-term elections in November.

Lowering or removing tariffs on everyday consumer items such as clothing would be an easy fix to bring down inflation quickly. But even if according to some reports Biden announces something this week, the decision could be a fraught one politically amid opposition by some lawmakers as well as by some within his own administration. In addition, Biden may find it difficult to make a significant rollback in tariffs if China does not reciprocate and offer something in return.

Nevertheless, any progress in the coming days may yet lift spirits on Wall Street as traders are in need of grasping onto positive news.

Dollar rallies as euro and aussie take a dive

But although equity markets avoided a complete bloodbath, it was a different story in FX markets. Safe haven currencies such as the US dollar, Japanese yen and Swiss franc rallied as European gas futures jumped to the highest since March at the onset of the Russia-Ukraine conflict.

The dollar index soared to a new two-decade high, surpassing the 106 level.

Fears that the energy crisis in Europe is about to get a whole lot worse sank the euro, which plummeted to the lowest since late 2002, crashing below the $1.03 level. Aside from the threat of Russia cutting off gas supplies to Germany and other European importers, a strike at several gas fields in Norway is fuelling the supply concerns.

The pound was down too, but by a more moderate 0.5%, and the Canadian dollar slipped by a similar amount. A big upward revision to the UK’s services PMI and signs of rising inflation expectations in the Bank of Canada’s quarterly business outlook survey are likely supporting those two currencies.

However, the Australian dollar has joined the euro’s freefall today, tumbling by more than 1% after the Reserve Bank of Australia raised interest rates by 50 basis points as expected. The RBA confirmed that the two rate hike options on the table at the meeting were 25 and 50 bps, disappointing those that were speculating that a 75 bps increase would have been considered too.