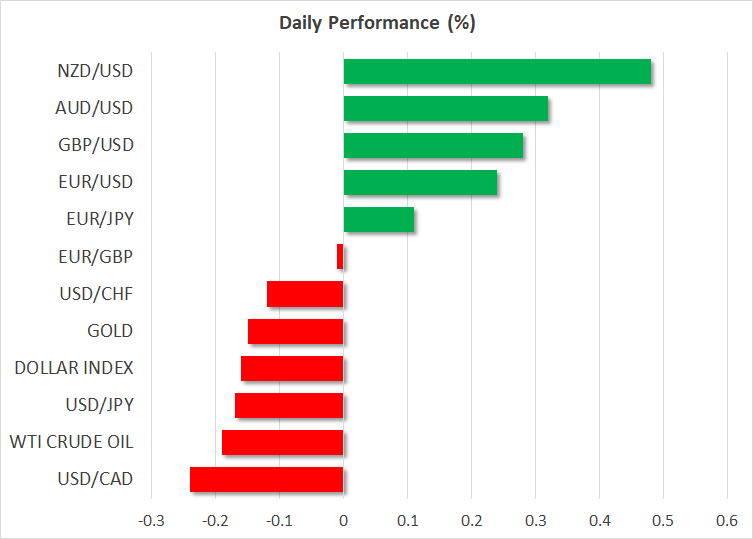 US inflation hits 7%, markets take it in their stride

It was another disconcerting inflation report out of the United States on Wednesday as headline CPI edged up to 7.0% in December – the highest since 1982. But the figure was in line with expectations and hopes are rising that inflation is close to peaking. With fed funds futures already configured by investors to foretell at least three rate hikes this year and Treasury yields climbing to post-pandemic highs in January, the market’s job of pricing in higher inflation and higher borrowing costs may be done.

That’s assuming of course that inflation really is near its peak and the Fed won’t have to move more aggressively in tightening policy than it has already signalled. There has been a chorus of Fed speakers this week calling for interest rates to start rising immediately after tapering ends in March.

It will be interesting to see if Fed Vice Chair nominee, Lael Brainard, who is one of the more dovish FOMC members, will join that camp when she testifies before lawmakers later today. Chair Powell has so far not been specific about the timing of liftoff but has strongly hinted that March is an option.

However, as long as the current inflation outlook holds, markets seem comfortable with the expected pace of rate hikes by the Fed. The big risk is if inflation doesn’t peak soon or doesn’t come down fast enough and the Fed is forced to press even harder on the monetary brakes. On the other hand, if yields don’t rise much further beyond current levels, the rally on Wall Street may still have some steam left in 2022.

US stocks extended their recovery on Wednesday, with the S&P 500 closing up 0.3% and the Nasdaq Composite by 0.2%. E-mini futures were slightly in the red on Thursday and Asian and European stock markets were mixed, signalling some caution.

There is still some uncertainty about the Omicron outbreak as well as ongoing concerns about the Chinese economy. China’s embattled real estate sector keeps flashing red as more property developers are seeking to extend the deadlines of their debt payments, while a smaller-than-expected increase in bank lending in December added to the somewhat downbeat sentiment in Asia today.

The main focus, though, for equity markets over the next few weeks will be on the latest US earnings season. Delta Air Lines will announce its earnings results before today’s market open but the season won’t properly kick off until tomorrow when the big banks begin to report.

In the FX sphere, there was a much more notable reaction to the latest US inflation stats as the dollar took a heavy beating. Although the month-on-month CPI increase was slightly bigger than forecast and there was little to suggest that price growth will moderate soon, markets don’t see the Fed’s policy path being driven off course for the time being. Hence, the dollar rally may have run its course and key barriers were broken on Wednesday as the euro finally cracked the ceiling of its two-month old range. It’s continuing its ascent today, climbing to around $1.1465.

The dollar index, meanwhile, fell through the floor of its sideways channel, hitting a low of 94.71.

Aside from the euro, the Australian dollar was the other big winner, surging past the $0.73 level on Thursday. The loonie and kiwi also rose to two-month highs and sterling shot above $1.37 to reach an 11-week high.

Commodities rallied too on the back of the weaker dollar, though oil prices were somewhat held back by a mixed US inventories report and gold was back under pressure today.