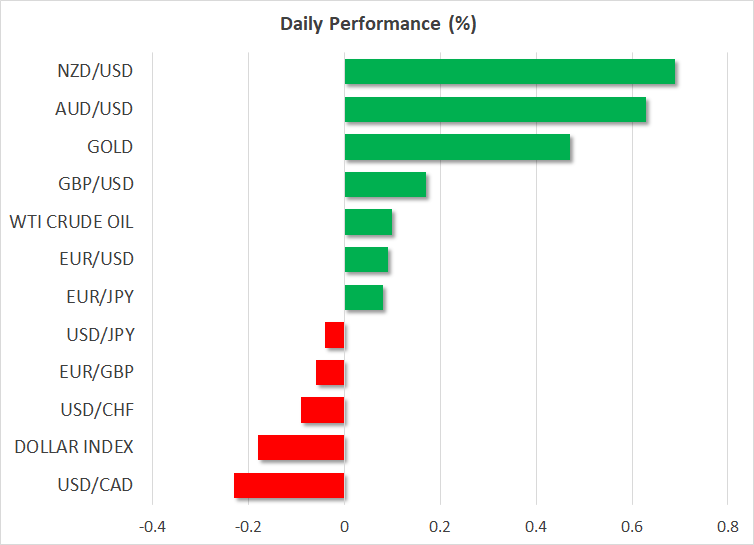 Despite a few wobbles, the recovery that got underway on Wall Street at the start of the week has gone from strength to strength and the major US indices are on track to break their near two-month losing streak. Since April, every attempt at a rebound has ended up being nothing more than a short-lived bounce. But the current rally may have more legs this time as fading worries that the Fed might tighten too aggressively combined with cheaper valuations is enticing investors back into equities.

An upbeat set of earnings by two of China’s big tech firms – Alibaba Group and Baidu – on Thursday has added to the positive sentiment, offsetting some of the concerns about China’s deteriorating economic outlook.

On Wednesday, there was relief after the Fed sought to explain its strategy of front loading rate hikes in the May minutes, hinting that a pause could be on the cards later this year if inflationary pressures begin to stabilize. Some soft numbers on the US economy this week have further dented rate hike expectations, with several investors predicting that the Fed will start cutting rates in 2023.

The subsequent pullback in Treasury yields has sparked a 4.2% jump in the tech-heavy Nasdaq Composite, while for the week as a whole, the S&P 500 has so far gained 4%. E-mini futures are trading flat on Friday and there was some weakness in Europe too.

London’s FTSE 100 lagged its continental rivals as energy stocks were hit by UK Chancellor Rishi Sunak’s plan to slap a windfall tax on the profits of oil and gas companies to pay for a grant for every UK household amidst the cost of living crisis.

The shift in Fed expectations has been detrimental to the US dollar, however. The dollar index has declined by almost 1.5% this week, hitting a fresh one-month trough today, and is headed for its second straight week of losses. When you factor in that the recent batch of data out of the United States has been so-so, there are some signs that inflation is peaking, and now the Fed is saying that it is mindful of not overreacting to inflation, it’s hard to see the 10-year Treasury yield climbing back up to 3% very quickly. And this could be a drag on the greenback for some time.

Today’s PCE inflation figures might not be of much help either as the core PCE price index, which the Fed watches closely, is expected to have moderated slightly from 5.2% to 4.9% y/y in April. On the other hand, if the data is a lot stronger than the forecasts, there could be a bit of a reversal in the recent moves.

Elsewhere, there were gains across the board for the other majors, with the exception of the safe-haven yen and Swiss franc, which struggled along with the dollar. The euro and New Zealand dollar are this week’s star performers.

The ECB is looking increasingly like one of the more hawkish central banks right now as it’s only just begun to lay the groundwork for exiting QE and raising interest rates. Even if the ECB’s terminal rate is well below that of the other big central banks, the hawkish rhetoric should benefit the euro in the short- to-medium term because it is so late in joining the rate hike club.

The pound hasn’t been able to rally as much as some of its peers this week following the big miss in the UK services PMI on Tuesday. But it has found support in the UK government’s latest attempt at easing the burden of high energy bills on British households. Sunak’s total giveaway amounts to a bigger-than-expected £21 billion and while it won’t solve the country’s inflation problem, it should boost growth at least to a small extent, and this has aided sterling to rise back towards the $1.26 region.