It took only five months for the S&P 500 to heal its 2020 pandemic wounds and sail back to uncharted waters as the Fed’s massive stimulus and heavy fiscal support boosted business sentiment and levelled up stock purchases. Companies never saw their quarterly earnings results growing so exponentially as over the past year, making the stock rally more sparkling and every dip an opportunity to buy. Nevertheless, things could take a different turn when the Q3 earnings season starts next week. Growth concerns, supply constraints, policy changes and a shaky business environment in China are expected to keep the bulls out of the arena, though some sectors may survive with light injuries.Time to get off the peak

Despite the pandemic jitters and the emergence of new covid variants, the first half of 2021 has been an extraordinary blessing for the broad S&P 500 community. Following a booming Q1, revenue growth popped up by a whopping 25.20% y/y, earnings per share skyrocketed by 96.3%, and profitability, as reflected by net margin, ascended 13.28%, with a bulk of companies reporting another round of all-time highs as the ultra-low interest rates, the immense amounts of asset purchases from the Fed, as well as the generous paychecks from the government created extra demand for goods and services. 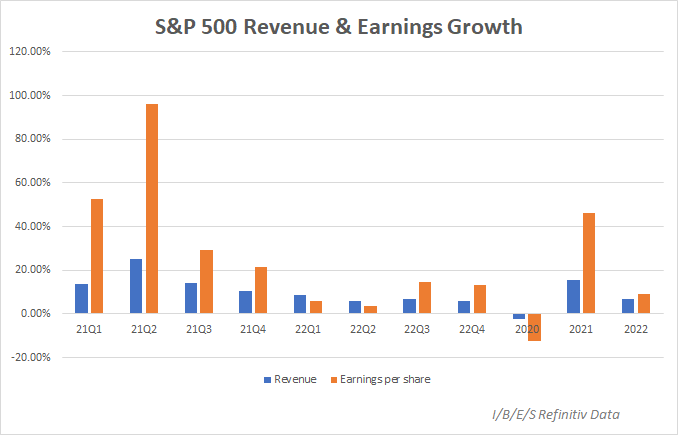 As for the upcoming earnings season, which officially starts with US big banks on October 13, investors have grown quite skeptical about Q3 results since the end of August. Indeed, the releases so far have already sent some bearish signals for Q3, although the results had been overall healthy, with FedEx, Nike, and Oracle being the latest to whiff on earnings estimates. Of course, there have been some exceptions like Pepsico, which beat investors’ projections, though input cost increases, a shortage of skilled workers and bottlenecks in supply deliveries have been a common cause of discounting the outlook for the next quarter among all the aforementioned companies. 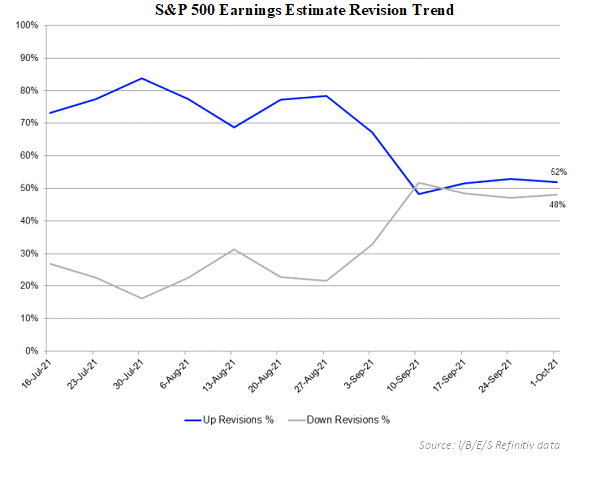 Well, the unusual expansion during the past year has benefited from the easy comparisons to the harsh lockdown 2020 periods. Hence, as the 2020 low numbers move out of the yearly equation, the expansion rate could normalize, and perhaps this is one reason revisions to Q3 estimates have lost some magnitude relative to previous earning seasons. Nevertheless, base effects will not be the major theme of discussion during the coming earnings season, but investors could pay special attention to the margins’ trajectory in order to identify struggles with any inflation pressures.

At this point, the question that arises is which sectors could survive a volatile earnings season or at least face softer declines if indeed the above jitters bring some clouds to the horizon.

Energy and bank stocks could be in a beneficial position. Taking oil producers as an example, cold days during winter usually grant a surge in demand for oil and natural gas products. That in return will probably add more fuel to the oil rally. Any further delays in delivery could only enhance rising prices, likely boosting margins for oil producers. 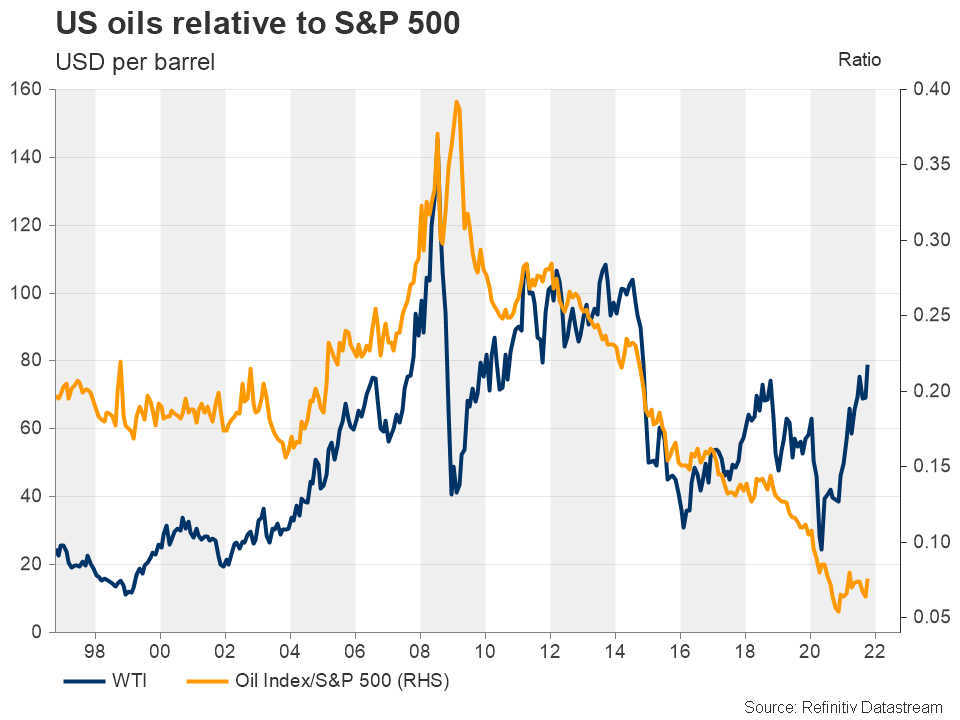 Similarly, US banking and financial stocks, which have immediately recouped pandemic losses and thrived to all-time highs on the back of investment banking practises and higher deposits over the past year, may also show resilience if persisting inflation bolsters rate hike expectations. However, an asterisk is needed here as the bullish scenario should also include healthy consumption tendencies – it would not matter if lending costs advance but nobody wants to take loans, or an unreasonable inflation rate eats households’ savings.

Rising treasury yields could be another tailwind for banks, at least in the short term. To explain that, banks borrow short-term and lend long-term, hence should the Fed keep its interest rates steady in the next couple quarters and the 10-year Treasury note accelerates on the back of inflation and future rate hikes, financial stocks could enjoy another boost. 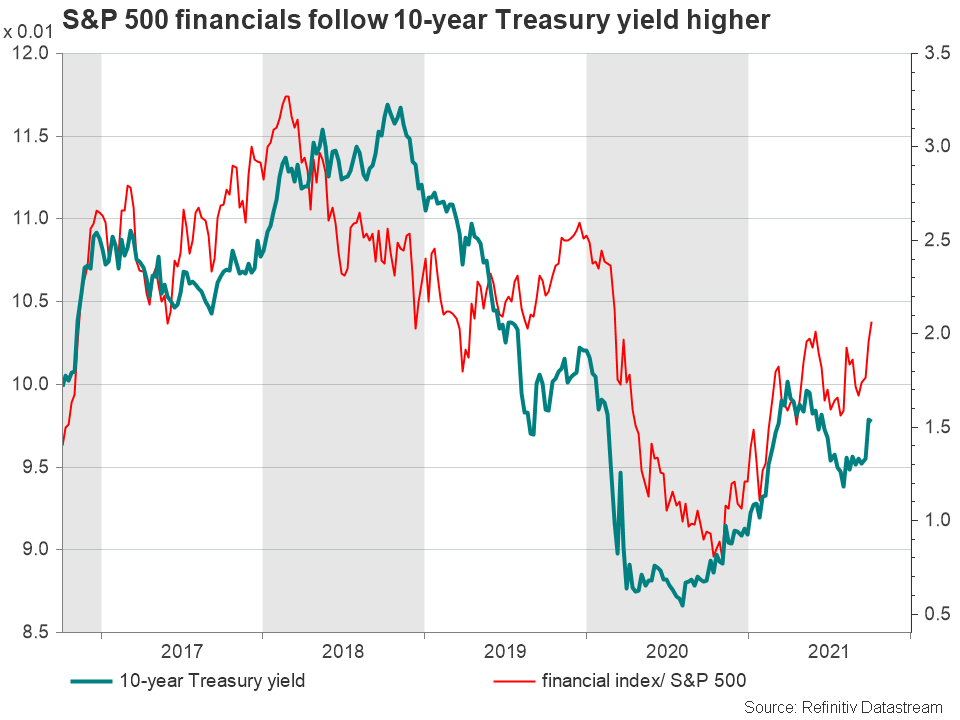 On the other hand, tech companies may see their fortunes plummeting on the back of strengthening Treasury yields after a fantastic bullish explosion during the past two years.

Thanks to their steady business models and strong balance sheets, tech companies such as Amazon, Facebook and Apple faced no scratches during the hard times of lockdowns, navigating their stock prices comfortably back to the uncharted territory. The positive pattern, however, experienced some damage in mid-September when a rapid pickup in Treasury yields signalled a discounting in the value of future cash flows.

Apparently, the big US tech firms will not entirely lose their charm, and may keep drawing investors’ attention even if growth jitters widen. However, in the near term, a combination of disappointing earnings releases, a downward-revised guidance, and high Treasury yields may fortify selling pressures in tech stocks, likely hardly hitting those with the highest valuations.

Growth in house prices has been uncomfortably high between more demand and less supply since the end of 2020 in the US, though if it was not for China’s battered property developer Evergrande, the real estate sector could remain out of the spotlight.

Perhaps companies with strong exposure to Chinese markets, including semiconductors and tech firms, will be closely watched during the earnings season amid fears of fading sales in the region, though as regards the US housing market, it will probably avoid a China-style damage, but a slowdown could still be inevitable after an upbeat performance during the previous quarters.

Building permits have entered the expansion area in August, while mortgage rates remain close to 2020 lows, suggesting that households may keep seeking buying opportunities in property markets, especially if rents keep fluctuating in the stratosphere.

That said, some stabilization in the construction sector would not be very surprising given the steep price increases in raw materials, unfilled job positions, and inventory constraints. The biggest home builder company D.R Horton has recently blamed those factors for experiencing delivery delays, slashing its outlook for the industry, and consequently pressing its stock closer to March lows. If more companies have similar things to say during the earnings season, housing stocks could extend their declines. Yet, given Biden’s promising infrastructure bill, fundamentals could overall remain healthy for the industry.

To sum up, the next round of earnings releases may not show the record momentum previous reports witnessed, with S&P 500 companies likely downgrading their guidance for the last quarter of the year. Still, some companies, especially those in the financial and energy sector, could perform better than others.