It’s been a tumultuous few weeks for Bitcoin and other cryptocurrencies as the war in Ukraine has been both a positive and a negative driving force for digital currencies. But the deepening rout in equity markets is threatening to undo Bitcoin’s 46% rebound from its January trough as the $38,000 support was tested again.A bumpy uptrend

Bitcoin posted an impressive, though bumpy, rally between January and March when it recovered from a six-month low of $32,950.72 to climb as high as $48,234 on March 28. Russia’s invasion of Ukraine was a major setback, but it didn’t take long for the rally to resume as, apart from a rebound in risk appetite, cryptocurrencies were also benefiting from speculation that Russians were using digital assets to evade Western sanctions as well as the capital controls imposed by Moscow. The encouragement by Ukraine’s government for international donations to be made in cryptos to help its war efforts also likely boosted prices during March.

However, the mood has faltered dramatically in April as intensifying expectations that the Federal Reserve will hike interest rates multiple times this year has dented confidence in riskier assets. Although in the past, Bitcoin has illustrated some convincing correlation with safe havens such as gold, its relationship with risk assets has been even stronger lately. 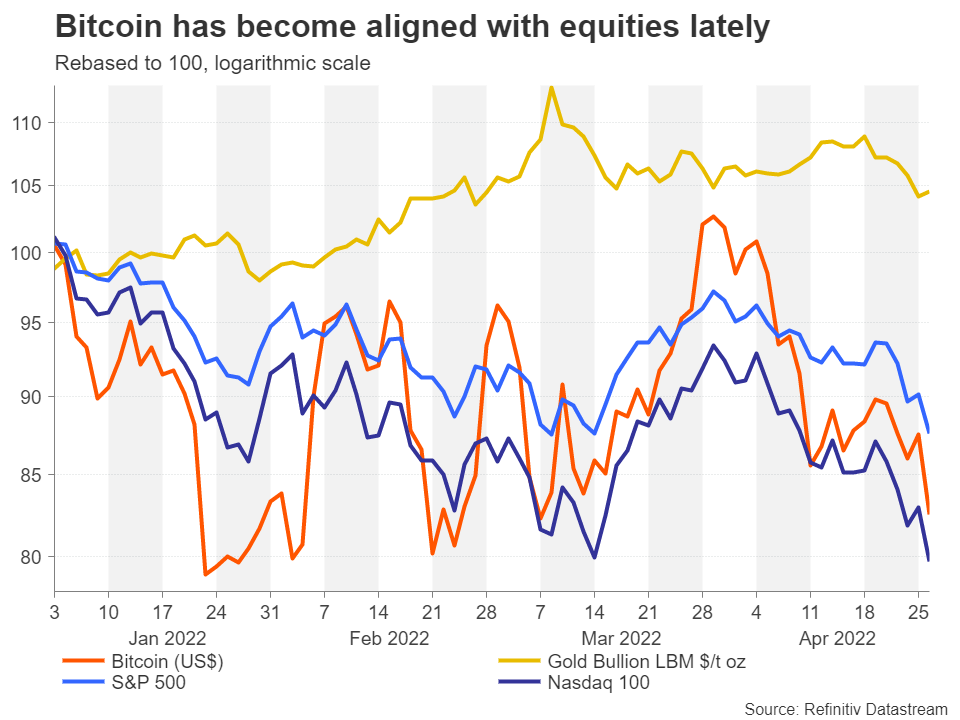 Stocks have been hammered this month on fears that soaring inflation, rising borrowing costs and lingering supply disruptions will slow growth in the major economies, if not tip them into outright recession. In the United States, where inflation is at a four-decade high and the Fed is expected to hike rates by at least another 200 basis points this year, the yield on 10-year Treasury notes came close to reaching 3% last week for the first time in more than three years. This has been weighing on tech and growth stocks, which are more sensitive to long-term lending rates.

An overall better-than-expected earnings season for Q1 has provided some support but hasn’t been enough to turn Wall Street around amid all the gloom. However, although this is spurring many traders to seek less risky investments, cryptocurrencies remain attractive as alternative assets. The heightened sense of uncertainty could therefore generate bouts of buying interest during this torrid period, especially on days where there are positive developments concerning the cryptocurrency market.

For example, Fidelity Investments announced on Tuesday it will start offering Bitcoin to retirement savers. The news was unable to offset the negative sentiment in the broader markets and could only offer a temporary lift, pushing it briefly above $40,000. Similarly, Monday’s gains on the back of Twitter’s acceptance of the takeover bid by Tesla boss, Elon Musk were also wiped out.

But this does nevertheless highlight that cryptocurrencies are unlikely to be ever entirely driven by equity markets. It’s also another reminder that the industry has yet to fully mature and is evolving fast, so prices will continue to be sensitive to headlines that involve either their growing adoption or fresh regulatory curbs.

Musk’s acquisition of Twitter could yet provide a more sustained boost to cryptos should speculation that the move will lead to the social media platform accepting Dogecoin as a payment system prove correct – something that would potentially benefit all digital coins.

Downslide may have further to go

In the meantime, however, Bitcoin’s bearish bias in the short term remains intact, though weakened slightly. The price slipped below its medium-term uptrend line last week and was blocked twice from stepping back above it. Although there is some upside pressure today, the Relative Strength index has some way to go before it can move back into bullish territory above 50.

If the selling pressure persists, the price could soon breach the longer-term ascending trend line, and this would then turn the focus on the $33,000 level.

However, if sentiment improves in the coming days, the 50-day moving average is a potentially difficult obstacle just above the $42,000 level that would have to be overcome. Though, for a more convincing rebound, Bitcoin would need to challenge the March peak of 48,234.