The highly contagious Delta variant of Covid-19 has fast become the dominant strain around the world, spreading beyond Asia. Countries with low vaccination rates like Australia have had no choice but to reimpose draconian lockdowns, but in other places such as America and Britain where most adults have had at least one vaccine dose, there are no plans yet to pause the full reopening of their economies. Is it sensible to assume so early on that vaccines have broken the link between infections and hospitalizations, or is this just wishful thinking and politicians and investors alike have gotten ahead of themselves? Delta variant is wreaking havoc

The Delta variant that was first detected in India is spreading rampantly everywhere and is threatening to undo more than a year of progress in getting the virus contained. Countries including Australia, Malaysia, Indonesia and Bangladesh have all announced fresh lockdowns in the last couple of weeks and there are fears more cities and regions will fall victim to stay-at-home orders if the Delta strain continues to rage.

However, apart from a mild dampening of the mood in Asian markets, there is little evidence to indicate that investors are worried about the latest spike in infections in a growing number of countries. Asian stocks have clearly been underperforming over the past month and have had a dreadful start to July. But there are other factors at play here, such as China’s clampdown on tech firms and Chinese leaders’ increasingly hostile rhetoric towards the West, so it’s not just virus concerns that have been weighing on sentiment. 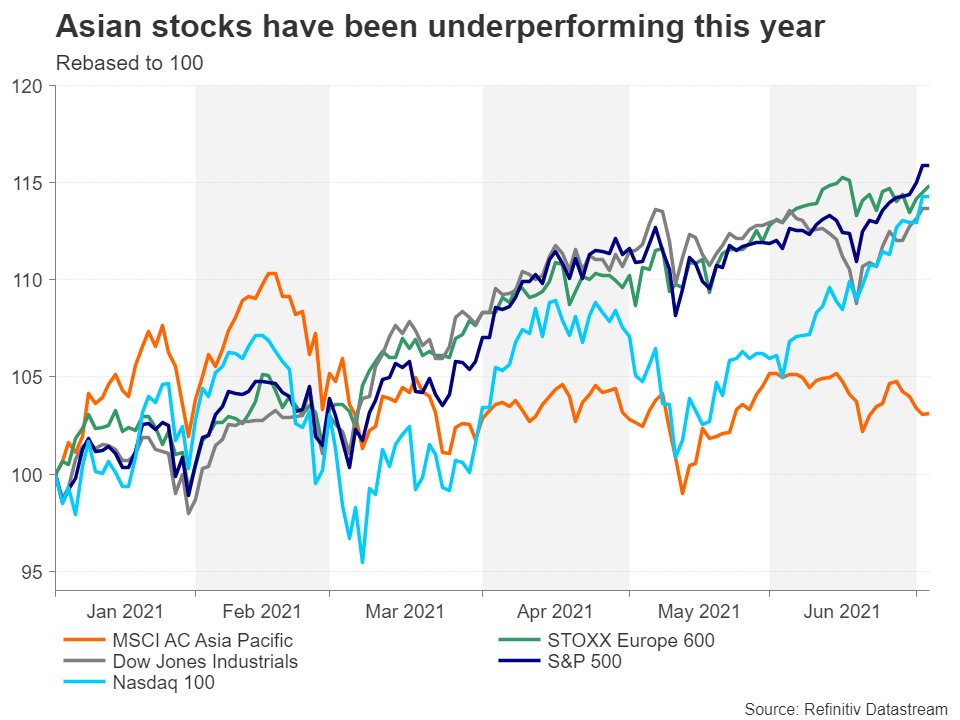 But in Europe and America where new infections are mostly low and Covid curbs are being relaxed, stock investors are still having a heyday, especially on Wall Street where the S&P 500 has notched up seven straight record closes. That could all change should the Delta variant get out of control and force authorities to dial back on reopening plans.

The question is, would the worst-case scenario of renewed lockdowns spell the end of the risk rally, or would expectations that fiscal and monetary policies will stay loose for longer keep the party going? Past market behaviour suggests the latter. Thus, apart from a brief panic episode and some rotation out of reopening stocks into defensive tech stocks, there may not be much turmoil in equity markets.

Is UK’s Johnson playing with fire?

It might be a different story, however, in FX markets where most big central banks are already edging closer towards tapering their massive stimulus measures, so a setback in the fight against Covid could have significant repercussions. The currency that has most to lose from a reversal in the easing of virus restrictions is the pound. The UK government has just announced it will end all social distancing rules in England on July 19 and mask wearing will no longer be mandatory. The only rules that look set to stay are for international travel. 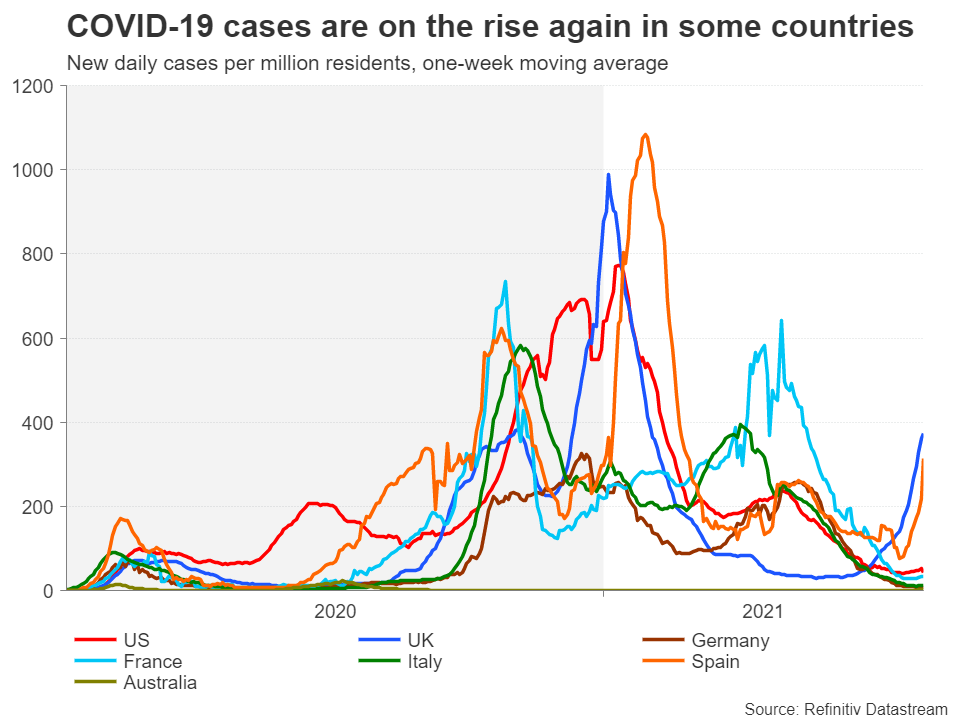 Britain’s daily virus cases have soared to the highest since January and are now the highest in Europe. However, hospital admissions have risen only fractionally and deaths remain very low. The British government seems confident that this proves vaccines do work and protect against serious illnesses, allowing it to lift all restrictions. But what if it’s too soon to be drawing such scientific conclusions and infections, and subsequently deaths, start to increase much more substantially once all social distancing guidelines have ended?

The pound’s impressive year-to-date performance has been built on the back of expectations that the UK’s superfast vaccine rollout will bring about a speedier recovery than most of its peers and that the Bank of England could raise rates as early as 2022. But the emergence of the Delta variant has shown that infections can still explode exponentially in countries with high inoculation rates. So is Boris Johnson taking a gamble by doing away with unpopular restrictions, hoping that jabs will prevent hospitals being overrun by Covid patients? Only time will tell, but should that turn out not to be the case, the pound will be in serious trouble. 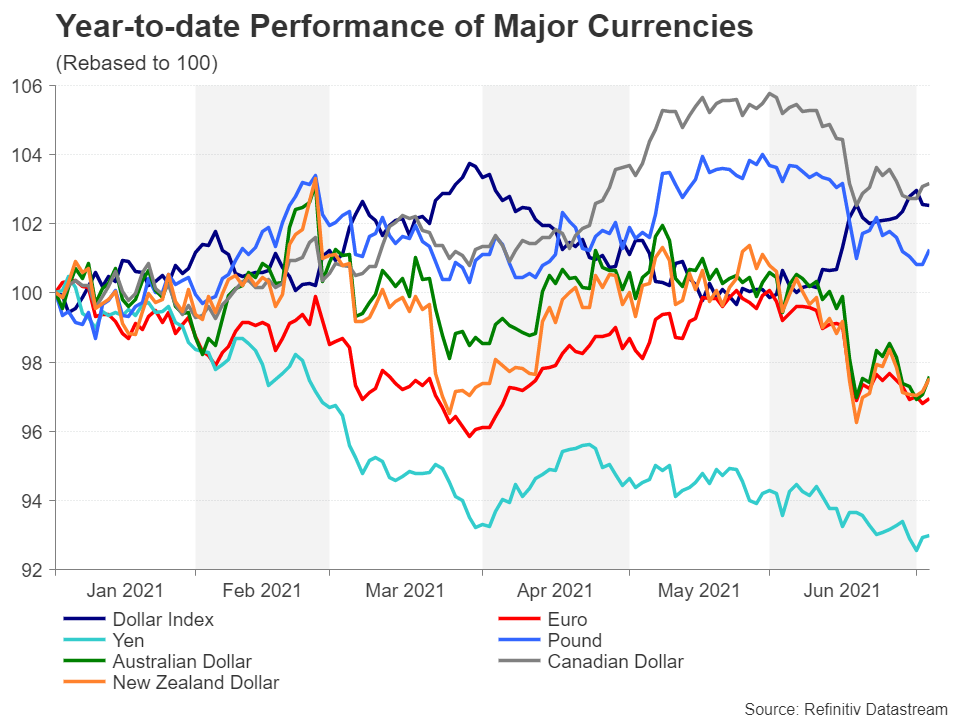 Aussie may come out unscathed from latest crisis

The euro has also benefited from reopening hopes, driven by the EU’s catchup in the vaccination race. However, Eurozone nations are proceeding much more cautiously with easing their virus curbs, plus, the European Central Bank is already anticipated to be one of the last to hike rates in a post-pandemic world, hence, the euro won’t suffer as badly as sterling.

In Australia, despite the country coming under the spotlight, the situation is not as grave as it might appear. Virus cases have already started to drop in the worst affected states, suggesting that the snap lockdowns are working and extended shutdowns may not be necessary. The Reserve Bank of Australia is not predicting a huge negative impact on growth at this point from the current measures and has already begun to pare back the pace of its weekly bond purchases.

While undoubtedly there is a lot of uncertainty about whether the Delta or any future strain can be as easily kept at bay as previous variants in populations with a low vaccine uptake, investors are not pricing a big economic hit to Australia and yield differentials with the US dollar remain the biggest driving force behind the aussie.

The New Zealand dollar is even more immune to the latest virus scare. New Zealand’s strict border controls should defend it from a major outbreak and like its aussie counterpart, the prime focus for the kiwi right now is how soon interest rates will rise.

US dollar might be saved by its safe-haven status

Canada and the United States are at a slightly higher risk of seeing a fresh jump in infections from either the Delta or another more dangerous strain. Both countries have very high vaccination rates, behind only the UK. But should they remove too many restrictions, they could find themselves in a similar predicament as Britain, having to choose from ‘learning to live with the virus’ or delaying the full lifting of all rules. 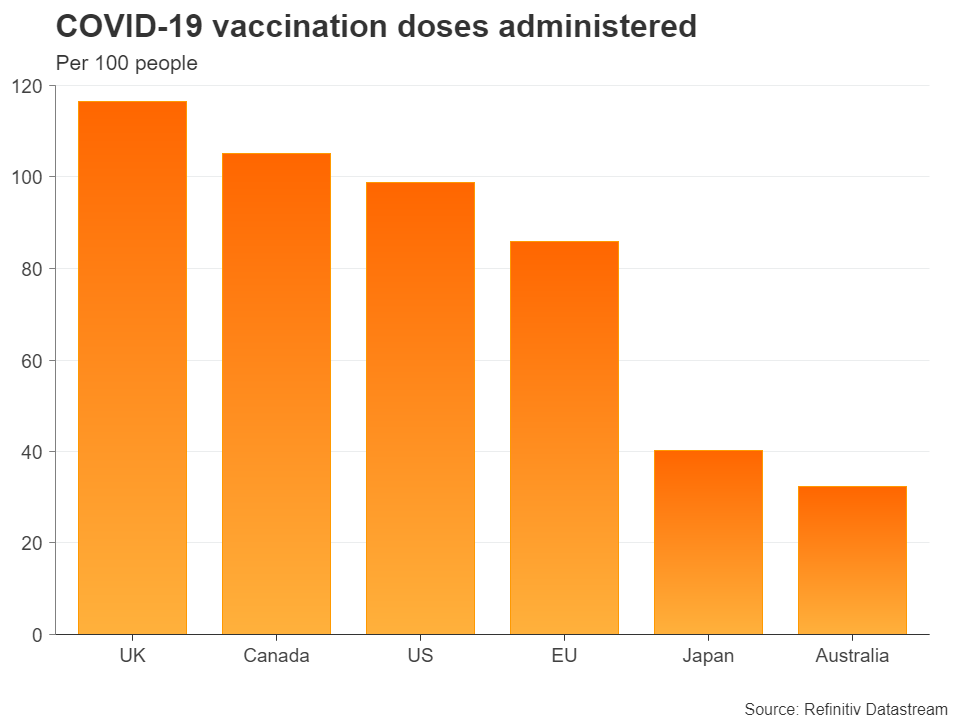 The Canadian dollar is probably the second most vulnerable currency after sterling to a major repricing of tapering expectations by its central bank, although the Canadian government is unlikely to follow in the UK’s footsteps. Nevertheless, with the Bank of Canada already firmly on the path of exiting its pandemic stimulus, any significant downgrades to the economic outlook could spark a sharp correction in the loonie.

However, when it comes to the US dollar, a worsening outbreak around the world would likely be positive due to its standing as the global reserve currency. The only scenario where the dollar would face severe selling pressure is if the US outlook were to deteriorate more than its peers and the Fed has to push back its tapering timeline. Otherwise, the greenback could prosper should investors come to the realization that periodic lockdowns are here to stay in the foreseeable future as the American economy would probably do relatively better under such conditions.

Optimistic narrative not affected yetFor now, though, markets are sticking to the narrative that vaccines will break, or at the very least, weaken the link between infections and hospitalizations. If that assumption is later found to be incorrect and complacency leads to another surge in virus deaths and inevitably to more shutdowns, currencies bolstered by the reopening optimism would no longer be deemed so attractive. On the other hand, risk assets only stand to gain from expectations of prolonged stimulus as has been the case in the past during the pandemic.