The Reserve Bank of Australia was one of the few central banks among advanced economies that was not dragged into the world of quantitative easing (QE) during the 2008 financial crisis. But having already been bruised by the US-China trade dispute, it was clear the Australian economy would not be as fortunate in the current crisis from the virus pandemic. As had been widely anticipated, the RBA joined the QE club after holding an emergency meeting on March 18. With not a lot left for the Bank to do, at least for now, no change in policy is expected at Tuesday’s regular meeting (04:30 GMT).

Policymakers at the RBA had been hinting at QE for some time now as rates moved dangerously close to zero after the Bank cut the cash rate three times in 2019 to cushion the economy from the damaging trade war. With “no appetite” for negative interest rates and a clear indication that the lower bound of interest rates is 0.25% – where they were cut to in March – further measures by the RBA will likely comprise of changes to its QE programme and additional support for the banking system to maintain cheap lending. 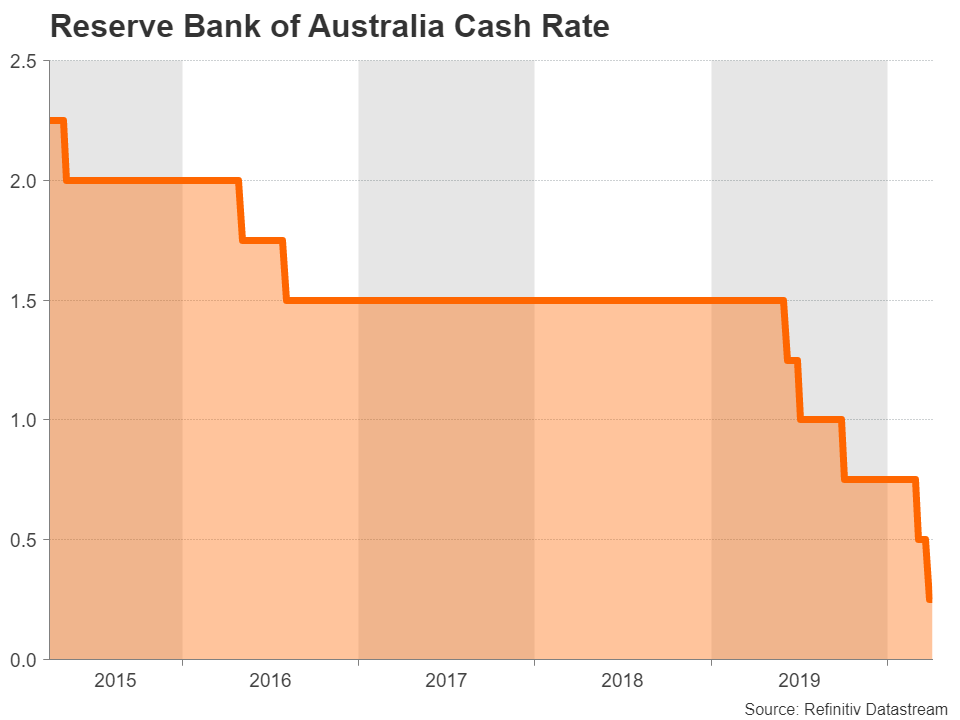 The RBA’s QE scheme is different to that adopted by most other central banks and resembles more closely the Bank of Japan’s quantitative and qualitative easing (QQE) programme whereby it targets the yield on government bonds rather than set a specific amount of purchases. The RBA’s target is to keep the yield on 3-year Australian government bonds (AGB) at 0.25%.

Having only just launched its bond purchases, it’s probably too soon for the RBA to deem it necessary to make adjustments to the programme even as it warns of a “material contraction in economic activity”. However, if the virus fallout does not subside quickly enough (which doesn’t seem likely that it will), policymakers have several options they can pursue.

At the moment, the Bank is only controlling the yield on 3-year bonds, but it could start targeting longer-term yields to broaden the range of AGBs it buys. It could also widen the type of assets to purchase by including corporate bonds like other central banks already do. Additionally, the RBA could tweak its term funding facility for banks by making it more generous.

But those measures will likely be saved for a rainier day. At present, the situation in Australia is not quite as dire as in many other countries, and together with the government’s fiscal stimulus package, the RBA may think the economy has enough support to ride out the virus storm.

As for the Australian dollar, with no more room for interest rate cuts, RBA policy will no longer have as much of a direct impact on the exchange rate as previously, meaning the currency will primarily be driven by global risk sentiment. Still, traders should watch out for knee-jerk reactions in aussie/dollar to the tone of the RBA’s statement.

A downbeat assessment by the Bank could push the aussie lower to the 23.6% Fibonacci retracement of the January-March downtrend at $0.5866. A slip below this point would bring the $0.55 level – near March’s 17-year low – back within range.

However, if the RBA’s language isn’t as pessimistic as is being anticipated by the markets, the aussie could recover some ground to claw above the 38.2% Fibonacci of $0.6089 before making an attempt for the 50% Fibonacci of $0.6268.