Employment numbers out of Australia will come under the spotlight on Thursday at 02:30 GMT as questions marks remain about the robustness of the Australian economy. Recent indicators out of the country have been on the soft side, keeping rate cut expectations well and truly alive. Nevertheless, the Australian dollar has been able to post an impressive rebound on the back of the de-escalation in Sino-US trade tensions. But could another month of poor jobs data jeopardise the aussie’s upswing?

Recent data have been less than impressive

In October, total employment fell for the first time in 17 months, triggering a selloff in the local dollar as investors bet that the Reserve Bank of Australia won’t stay on hold for long and will cut the cash rate again. Weaker-than-expected GDP growth and retail sales figures since then have underscored the need for further monetary stimulus in Australia and policymakers appeared to acknowledge this in the minutes of the December policy meeting.

However, with the RBA fast running out of room to cut rates deeper before reaching the zero threshold, policymakers might be tempted to move more slowly going forward following the aggressive easing seen this year that took rates down to 0.75%. Thursday’s report might give the RBA some breathing space as employment is expected to have bounced back in November.

The Australian economy is forecast to have created 14,000 jobs in November, replacing three quarters of the 19,000 jobs lost in the prior month. However, the unemployment rate is projected to remain unchanged at 5.3%, still some way off the 8-year low of 4.9% achieved in February. 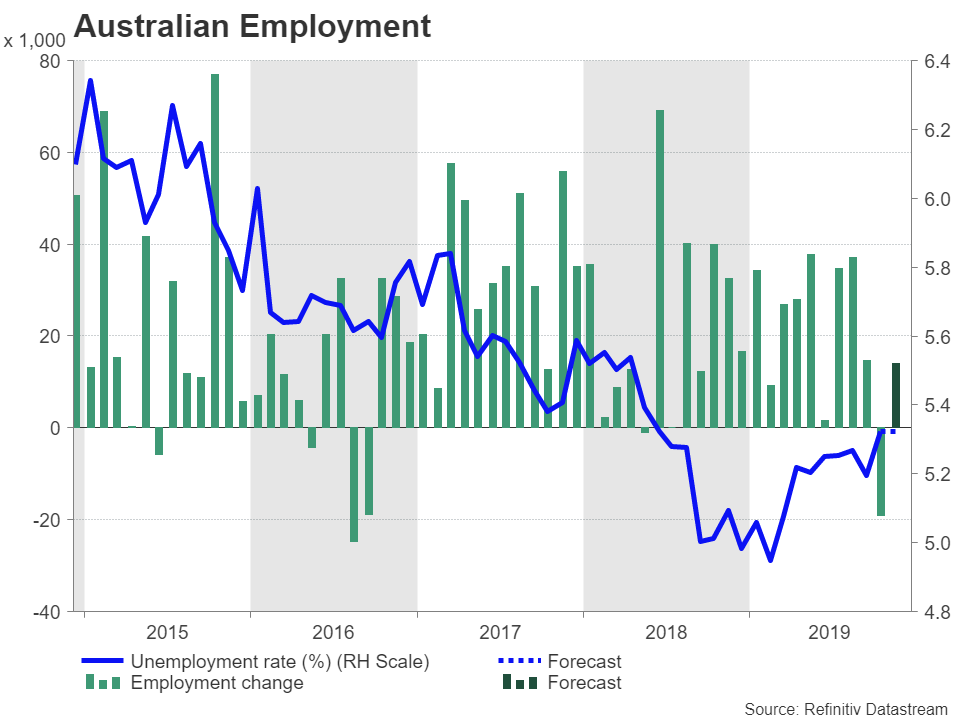 Such soft numbers are unlikely to quell expectations that the RBA will have to cut rates again in the near future and investors have fully priced in a 25-basis points reduction by May. Some think the Bank will have to slash rates even further with markets assigning a near 45% probability of a second rate cut by December 2020, making the RBA one of the few central banks that’s expected to ease more than once next year.

The aussie is at risk of slipping back below its 50-day moving average around $0.6830, which lies near the 38.2% Fibonacci retracement level of the July-October downleg, if the data disappoints. Falling below this support would open the way for the $0.6750-0.6766 area, which if broken, would negate the weak bullish structure in the medium-term.

If, though, the employment report points to unexpected strength in the labour market, the aussie could climb back above the descending trend line, currently around $0.6875, and have another attempt in challenging the December 13 peak of $0.6938.

Heading into 2020, market bets of a rate cut, possibly as early as the February meeting, are likely to keep a lid on further gains for the aussie emanating from cooling trade frictions. Those expectations were amplified this week after the country’s finance minister seemingly ruled out more fiscal stimulus for the economy, leaving the burden entirely on the RBA to revive growth and prices.