Quarterly data on construction (Wednesday, 0030 GMT) and capital expenditure (Thursday, 0030 GMT) are awaited in Australia this week and should provide some indication as to what to expect from Q4 GDP numbers due next week. It’s likely capital spending will have risen for the first time in a year in the December quarter, but given the new headwinds – the coronavirus outbreak and the bushfires – facing the Australian economy in 2020, the data may not matter much for investors as panic grips the markets.

Australia has gone for more than 28 years without a recession – the longest spell among developed nations. But having survived the financial crisis unscathed, a new crisis closer to home could be what tips the country into recession if the virus epidemic is not contained soon.

So far, there isn’t anything very worrying in the data, though it’s too early for any impact to show up just yet. It could well be another couple of months before clear warning signs appear through economic indicators. And although under the circumstances traders will consider the Q4 figures to be unimportant, they may nevertheless determine how quickly the Reserve Bank of Australia cuts rates again.

Even before the virus outbreak, economic growth – by Australia’s standards – had been sluggish, with annual GDP growth dipping below 2% in 2019 as China’s economy continued to slow. It’s more than possible the devastating bushfires, which intensified in December, could have dealt a further blow on Q4 growth.

However, as far as business expenditure is concerned, it is anticipated to have ticked higher in the final three months of 2019, rising by 0.4% over the quarter to record the first positive change in 12 months. Construction activity – another key component of GDP – probably didn’t fare as well and is forecast to have declined by 1% on a quarterly basis. 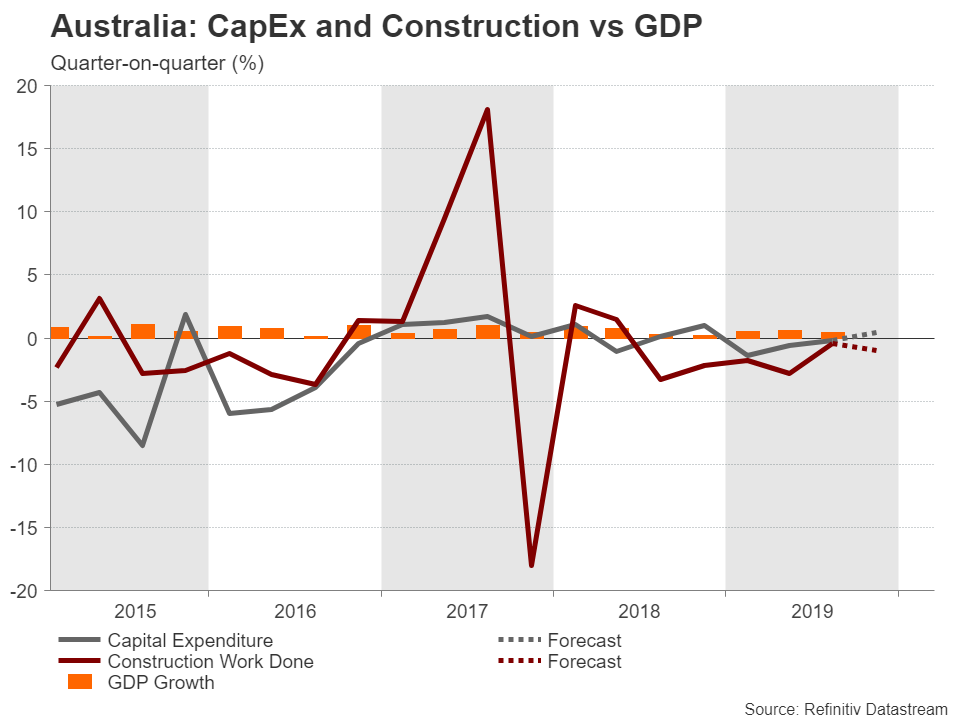 RBA expected to cut rates again, but when?

Any negative surprises in the numbers would likely raise fresh doubts about the robustness of the Australian economy, which is struggling to regain momentum as growth in China – Australia’s biggest trading partner – goes into low gear. They would also push up market expectations of interest rate cuts by the RBA. Investors are currently not pricing a full 25-basis point rate reduction before August, but weak data might change that, bringing the timing forward and dragging the Australian dollar lower.

The aussie could tumble to fresh 11-year lows if the fourth quarter releases fail to impress, opening the way for the 138.2% Fibonacci extension of the October-December uptrend at $0.6529. A slip below this level could accelerate the aussie’s descent towards the 161.8% Fibonacci at $0.6444.

In the event that the data is unexpectedly upbeat, this may not necessarily be enough to trigger much of a rebound in the aussie given the concerns about the outlook from the virus fallout and expectations that the RBA will soon have to ease policy again. Any upside attempt in aussie/dollar would probably stall at the 0.67 level.

Unless convincing signs start to emerge that the spread of the coronavirus is truly moderating, it will be difficult for the aussie and other risk-driven currencies to put a break on their slide and push for a sustained recovery.