Bank of Canada policy preview: The calm after the storm – Forex News Preview

The Bank of Canada will hold its last policy meeting before the year end on Wednesday at 14:00 GMT and markets are almost certain that no shift will take place as growing post-Covid prospects are outweighing the current virus resurgence. Should the Bank adopt a more optimistic tone, the Canadian dollar may seek fresh highs.

Markets are in a festive mood, celebrating the promising vaccine news that is highly projected to end the health crisis and put the global economy on more solid footing during the second quarter of 2021. But before that day comes, infections will keep spreading and government restrictions will continue to cap business earnings until a large part of the population is vaccinated. During this transition period, more liquidity would be needed to support struggling businesses and the millions of people who lost their jobs due to the pandemic, and Canada  is no exemption.

Unlike the US and the EU, however, Canada is not facing serious fiscal disputes, and this has allowed the government to peacefully approve a new stimulus package last week. The finance minister Chrystia Freeland topped up existing programs by another C$25 billion to help Canadians get through the winter and pledged to spend up to C$100 billion more in the next three years and after a vaccine is distributed.

Implicitly, the fiscal contribution removes some pressure from the Bank of Canada’s shoulders. Policymakers may feel more comfortable in adopting a wait-and-see approach when they meet on Wednesday amid hopes the Covid nightmare will end sooner than previously expected. Particularly, interest rates are widely projected to hold steady at a record low of 0.25% at least by 2023, and the asset purchases program is said to remain unchanged at current levels following the moderate tapering in weekly bond purchases in October from C$5 billion to C$4 billion and the increase in longer-term bonds. The slight decline in the unemployment rate in November and a larger-than-projected increase in new job positions is another indication that accommodative policy does not need further expansion, although December’s jobs release may come in inevitably weaker due to the new lockdown measures. 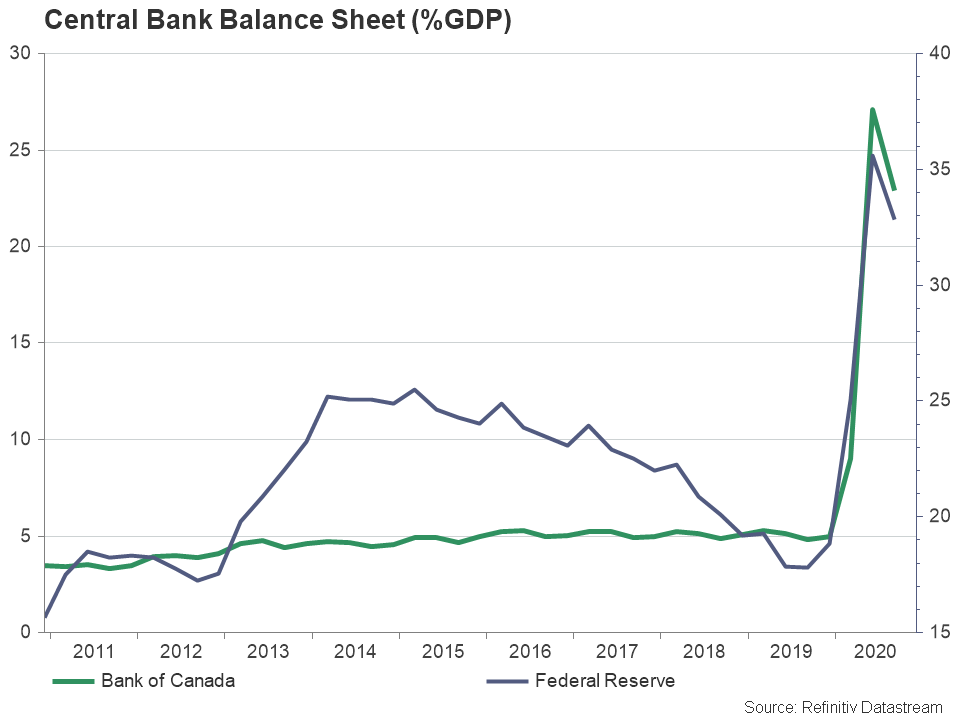 Another reason for policymakers to avoid a rate cut is that with the Fed promising to keep its borrowing costs at 0.10% for a long period of time, the BoC could attract a larger bulk of foreign investments due to its higher rates when life returns to normal bids. The strength in oil prices triggered by the vaccine optimism and OPEC’S brighter outlook on crude demand, an elevated household saving rate, as well as a more predictable trade environment under Biden’s presidency could also benefit the commodity-dependent economy and pressure the muted headline inflation towards the BoC’s target.

Overall, it seems that the Canadian dollar is fundamentally in a relatively advantageous position when compared to its safe haven US counterpart. From a technical perspective, the risk in USD/CAD remains skewed to the upside as well. Although a rebound cannot be excluded towards the 20-day simple moving average (SMA) and the 1.2980 level as the pair is trading in overbought waters, according to the RSI and the Stochastics, the pair has recently strengthened its downward pattern to fresh lows, suggesting that a steeper rally is now or required to violate the bearish trajectory above the 1.3419 ceiling.

On the downside, the 1.2760 and 1.2550 former barriers will be closely watched if the BoC sees the glass half full rather than half empty. Markets have ruled out the case of a rate reduction next year, therefore any upside move in the loonie could stem from brighter prospects about 2021, including potential signals that the stimulus era is nearing an end and the virus economic slack could be absorbed earlier than previously thought. The Bank will not release new economic projections at this policy meeting, though some comments from the BoC deputy governor, who will give a speech on Canada’s economic progress on Thursday at 17:30 GMT, could update markets.

Note that in the US, Congress is under pressure to keep the government open and release coronavirus relief aid after Democrats endorsed a $908 billion package, which is smaller than they initially desired and larger than the $500 billion Republicans backed. Any news of progress in the next few weeks could push the US dollar lower due to fears of an escalating deficit, especially if the amount of support appears larger than estimated, helping the loonie to gain some ground.