The Bank of Canada meets on Wednesday for its scheduled policy decision and will announce the outcome at 14:00 GMT. Speculation has been rife about when the BoC will shift to an easing bias as it remains one of the few central banks among advanced economies that has not cut interest rates or signalled one. But with the latest data suggesting its full steam ahead for the Canadian economy, market odds for an end of year rate cut have receded slightly. However, that has not prevented the Canadian dollar from slipping to 2½-month lows against its US counterpart.

While many policymakers around the world have had to contend with starring at dismal data over the past few months, the Bank of Canada has been in a somewhat more fortunate position as the Canadian economy is the strongest its been in two years. GDP growth in the second quarter outperformed all its major peers, with economic output expanding by an annualized 3.7%. It comes days after inflation data showed the 12-month CPI rate unexpectedly held steady at 2.0% instead of declining to 1.7% in July. 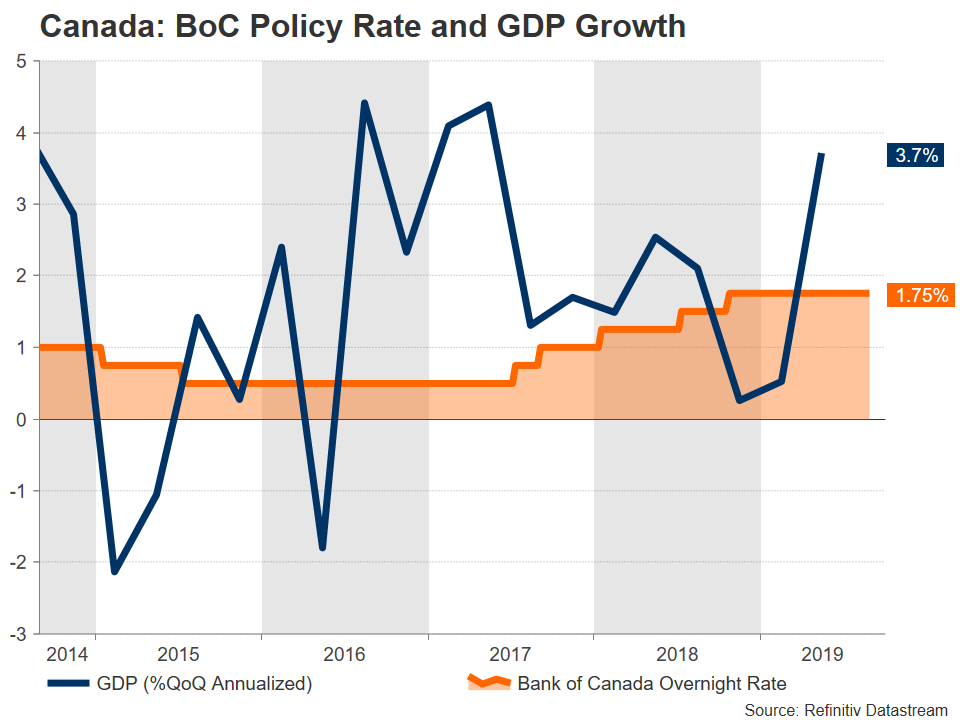 Trade war and weaker oil prices a worry for the BoC

Why then you might ask would the Bank of Canada want to consider lowering interest rates when there are few worrisome signs in the domestic economy? Well, the main reason is the ever-escalating trade war and the possibility that the United States might be pushed into a recession if rising tariffs put a further dent on business investment and start to hurt consumer confidence as well. About 75% of Canada’s exports go the US so a recession in its biggest trading partner is bound to spill over across the border.

Another concern for the Bank is the steady fall in crude oil prices since April, which does not augur well for Canada’s energy rich economy. These probably explain why the BoC placed more focus on the impact from the trade tensions and on developments in the energy sector than on incoming data at its last policy meeting in July.

Loonie vulnerable to a dovish lean

If the BoC makes a further dovish tilt this week, the Canadian dollar is likely to face further sell-offs. Dollar/loonie could stretch its recent gains to the 1.34 level before targeting the 78.6% Fibonacci retracement of the May-July downleg, at 1.3446. If the Bank goes one step further and strongly hints at a rate cut, the 1.35 level would be next to come within range.

However, if policymakers maintain the same cautious tone of the last meeting without clarifying what or when the next move might be, dollar/loonie could ease to around the 1.3288 level, which is the 50% Fibonacci mark. A drop towards the 38.2% Fibonacci at 1.3223 cannot be ruled out if the BoC surprises by switching back to being data dependent.

BoC to likely wait until after elections for policy change

With federal elections coming up in October, the Bank of Canada is almost certain to hold rates steady at 1.75% in September and the October 30 meeting is seen as the earliest that a rate cut can be delivered. But should the incoming data continue to paint a rosy picture of the economy, the BoC might hold off until the December meeting for any decision. In the meantime, investors appear to be becoming less confident about a near-term policy easing following the upbeat releases, as a year-end rate cut is no longer fully priced in and the odds have fallen somewhat to about 94%.