The Bank of Canada is expected to join the Federal Reserve and Reserve Bank of Australia in cutting interest rates this week as the global wave of central bank action to counter the economic fallout from the coronavirus outbreak begins. The BoC will announce its decision on Wednesday at 15:00 GMT and is widely anticipated to lower its overnight target rate by 25 basis points. Expectations of policy easing have pulled the Canadian dollar to 9-month lows as the virus epidemic has slashed demand for oil – Canada’s biggest export.

Canadian growth has been slowing

After slowing down sharply in the second half of 2019, Canadian growth picked up a pace in December as easing trade tensions and higher oil prices boosted exports. However, the good times seem to have been cut very short as the virus epidemic poses the biggest threat to the global economy since the 2008 financial crisis and oil prices have been on the slide since early January – before the outbreak began to escalate.

Making matters worse, anti-pipeline protests along key rail lines in Canada have been causing severe disruptions to businesses during February. According to the Canadian Federation of Independent Business, the railway blockages have had a negative impact on about a quarter of businesses in the country.

This, along with the calls for major central bank action to support the global economy from the virus impact, has put pressure on the Bank of Canada to ease policy immediately. Investors have fully priced in a 25-bps reduction on Wednesday and are betting that a second cut will follow in April. However, given the current bleak economic climate, which prompted the Fed to make an emergency 50-bps rate cut on Tuesday, a similar large reduction by the BoC is a possibility as Governor Stephen Poloz has a tendency to surprise. 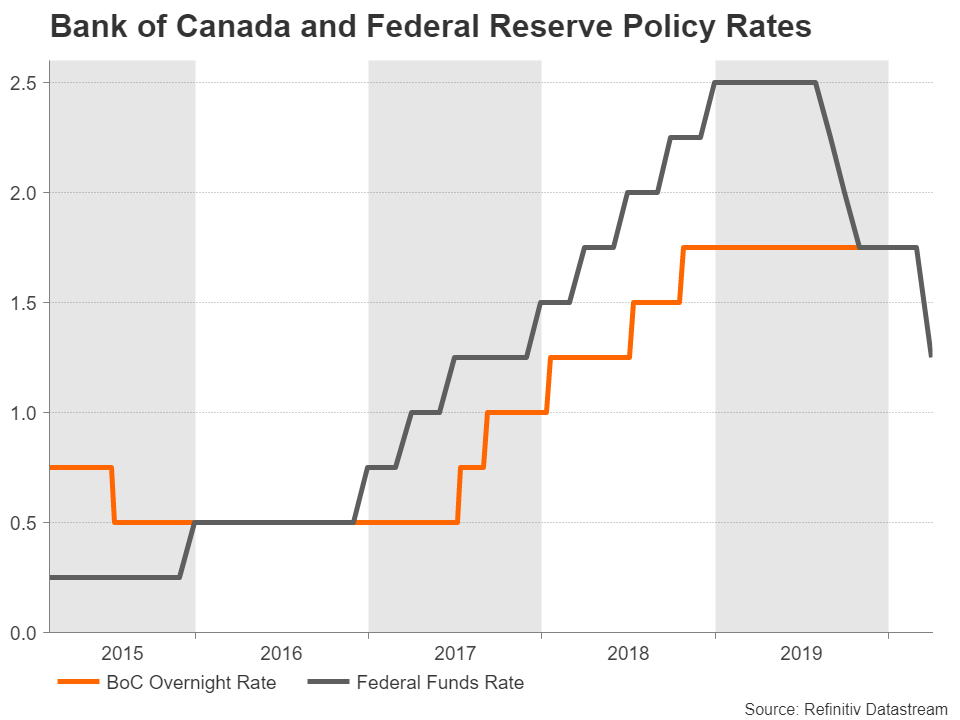 Should the Bank announce a bigger-than-expected cut, dollar/loonie may find fresh impetus to resume its upside move. The pair has pulled back slightly to around the key congestion area of 1.3345 after last week hitting a 9-month high of 1.3464 but a dovish BoC could send it flying back above the 1.34 handle. A successful challenge of the February top would pave the way for the May 2019 peak of 1.3564.

In the unlikely event that the BoC keeps rates on hold or cuts them as anticipated but does not commit to further easing, dollar/loonie could extend its downside correction to test the 23.6% Fibonacci retracement of the 2017-2018 uptrend at 1.3285. A drop below this mark could push the pair even lower towards the 200-day moving average just above the 1.32 level.

However, while it’s possible that markets may be getting ahead of themselves with expectations of aggressive easing, the short- to-medium-term outlook for the loonie remains bearish as the BoC is one of the few central banks that has substantial room to cut. And although the Fed also has more scope than most of its peers to slash rates, the Canadian dollar is perceived as more of a risk sensitive currency, while the greenback enjoys some safe-haven appeal. The loonie, therefore, is likely to stay on the back foot as long as the risks to the global economy remain elevated.