The British pound has erased all its gains from Boris Johnson’s decisive parliamentary majority last week as Brexit fears resurfaced. The focus is now turning to the Bank of England’s (BoE) policy meeting on Thursday at 12:00 GMT as markets are eagerly waiting to hear how the central bank is planning to deal with the new Brexit developments. While interest rates are widely expected to remain steady, policymakers are likely to save some caution, leaving the case open for a rate cut.

Boris Johnson’s victory last week means that the UK can finally departure from the EU without any additional delays on January 31 and under the legislative terms stated on the withdrawal agreement agreed with the European commission – once the Conservative-controlled British parliament signs the deal. It also allows the EU and the UK to move the Brexit story to the next level of future trade relations and even though this is encouraging for the UK’s economic outlook, it could just be the start of another drama given the restriction the British PM wants to legislate.

Particularly, Mr. Johnson is seeking to prohibit any extension of the 11-month transition period due to come into effect after the UK exits the bloc on January 31. Practically, this suggests that the UK must secure a trade deal with the EU before the end of 2020, something that currently sounds quite ambitious given the fact that trade talks are usually complicated and time-consuming. At the same time, the plan raises the odds for a chaotic exit, which lawmakers previously averted, and increases the case for a steeper economic downturn.

The UK expanded at the slowest pace in more than six years in the third quarter and Markit manufacturing and services PMI readings for the month of December flagged that the fourth quarter may not be better as the indices further stretched in the contraction area. Of course, the labor market remains robust according to the latest employment report. However, how long it will stay resilient depends on the business sentiment and whether it will improve following the encouraging election results. Indeed, the Brexit fog has partially cleared but since trade risks keep lingering in the background, companies will likely avoid making significant long-term investments. 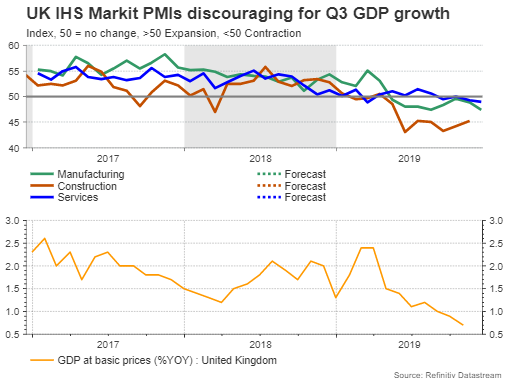 What will the Bank of England do?

Although the Bank of England has yet to join the dovish camp as its major counterparts such as the Fed and the ECB did, two MPC voters out of nine wanted a 25 bps rate cut at the November’s policy meeting in the face of the decelerating inflation and on fears the labor market was turning to the negative side. The two voters are expected to keep pressuring for monetary easing on Thursday, but the central bank is highly likely to leave interest rates steady for now and instead wait and see how the data will evolve in the coming months. If economic indicators deteriorate or fail to show a sustainable improvement, with the EU and the UK struggling to agree on future trade relations, then the central bank will be forced to cut borrowing costs to stimulate the economy and push inflation towards the 2.0% target. Hence it would be interesting to see if more policymakers are inclined to ease monetary policy in the upcoming policy meetings.

How the pound will react?

As regards the impact on the pound, markets are fully convinced that the BoE will not take any action this week, so any move in the currency will probably depend on the BoE’s Brexit remarks since there will be no press conference or inflation report accompanying the meeting. The latest stress test conducted by the Bank involved the scenario of a hard Brexit, with the BoE governor Mark Carney saying that the risk of a disorderly exit has fallen due to the election results but not faded. Therefore, the central bank is anticipated to save some caution on the Brexit front, with GBP/USD extending its losses towards 1.3000 and then near 1.2900 in case it uses a more negative tone and leaves the door open for a rate cut. Note that markets are currently pricing in a 50% probability for a rate reduction by the end of 2020.

On the other hand, if the Bank appears optimistic about the EU-UK’s future negotiations and Boris Johnson’s ability to handle them, reducing the odds for monetary easing, then GBP/USD could rebound to retest the 1.3170 area, where any break higher would bring the 1.3300 level back into view.