The Bank of Japan (BoJ) will announce its decision early on Thursday. Even though the economy is headed downhill, no action is expected by policymakers. Investors think that the US-China ceasefire, alongside the fiscal spending package PM Shinzo Abe recently unveiled, will be enough to stimulate growth – allowing the BoJ to save its limited firepower for a stormy day. As for the yen, with global risks diminishing for now, the path of least resistance may be lower in the near term.

The Japanese economy continues to feel the heat, with exports slumping amid global trade tensions and inflation trending towards zero once again. Someone might look at the strong GDP print for Q3 and conclude the economy is doing fine, but that would be an error, as that figure was artificially boosted by consumers and businesses front-running several purchases ahead of a planned sales tax increase in Q4.

Consumers going out on a shopping spree isn’t always a good idea. Most often, spending is reined in afterwards to make up for that overconsumption, which pushes growth off a cliff in the next quarters. That’s exactly what happened the last time this VAT tax was raised back in 2014 – a technical recession followed as spending collapsed.

This time is different

The BoJ and the Japanese government know this all too well, and therefore took steps to mitigate the impact. Shinzo Abe’s administration just launched a substantial fiscal spending package to stimulate the economy, aimed at repairing damage caused by typhoons and investing in infrastructure, as well as new technologies. 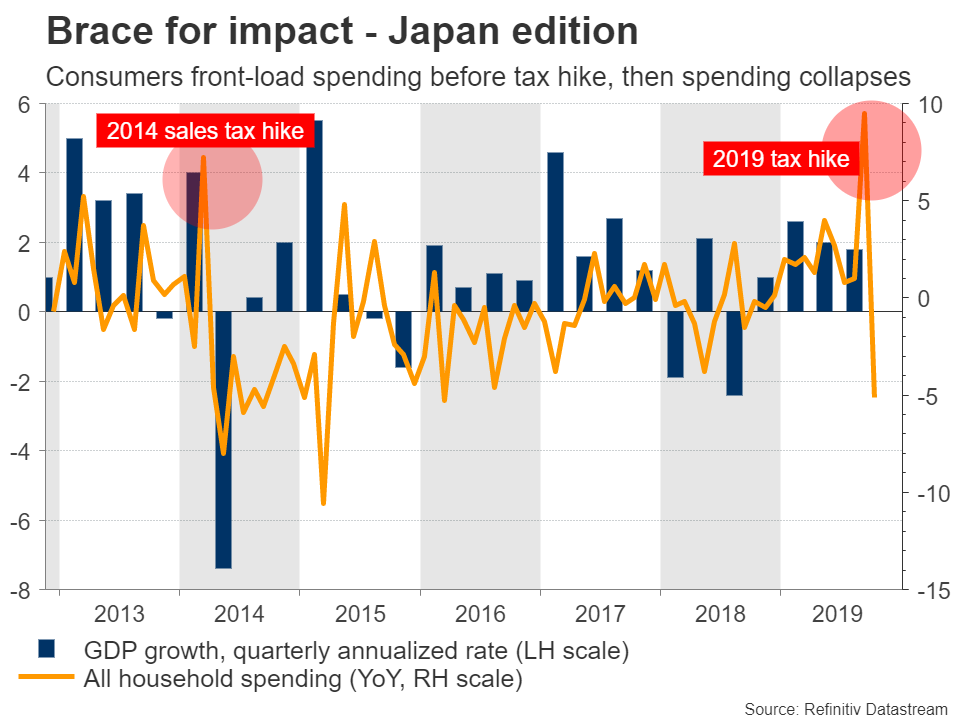 This is the main reason why investors think the BoJ won’t act. A few months back, the market was fairly certain that more monetary stimulus was coming, but now, much of those easing expectations have been priced out. Of course, the de-escalation in the US-China trade war helped as well, by painting a brighter picture for future growth and hence diminishing the need for more monetary ‘juice’.

Alongside these, there have been some signs that the weakness in global manufacturing is bottoming out, which is good news for an export powerhouse like Japan.

Another reason that investors shouldn’t expect much from the BoJ is the size of its gargantuan stimulus program. It already has in place one of the most aggressive easing programs in the world, meaning that it has very limited ‘firepower’ left, so it may prefer to save its ‘final bullets’ for a rainy day – for instance in case a shock hits the economy or the trade war reignites.

As for the yen, it is unlikely to react much to the BoJ decision. The Bank will probably keep policy unchanged but stress that it stands ready to act again if needed, which is what markets expect already.

Rather, the yen’s broader direction will probably depend on how global risk sentiment evolves, given its defensive status. On that front, it looks like it might be a cold beginning of the year for the haven currency.

The US and China reached a preliminary trade deal, and even though it was thin on substance, it was still enough to massively reduce the risk of more escalation in the coming months. Likewise, investors have turned more optimistic on Brexit lately, hoping that the negotiations can finally move forward now that Boris Johnson has secured a majority.

Therefore, two of the biggest risks facing global markets have greatly diminished and are unlikely to reignite in the coming months, implying that the path of least resistance for the yen may be lower in the near term. Longer term, approaching mid-2020, the risk of a no-deal Brexit could return alongside concerns about the US presidential election, but that’s a conversation for another day.

Looking at dollar/yen technically, another wave of advances could stall initially at 109.70, where an upside break might turn the focus to 110.70.

On the downside, initial support may be found near 108.40, with a bearish violation opening the door for 107.85.