Canada to add modest jobs, loonie may not abandon its bullish trend yet – Forex News Preview

In addition to GDP readings, Canada will publish employment data for the month of November on Friday at 12:30 GMT, providing its latest update on the health of its export-oriented economy. Although the numbers may not be exciting, they are not expected to darken the economic outlook either, likely helping the Canadian dollar to maintain balance against its US counterpart.

The reopening of the economy from the initial lockdown in the third quarter resulted in massive growth, with the economy expanding at the fastest annualized rate of 40.5%, buoyed by the enormous stimulus programs the government delivered. Still, many parts of the economy have not yet returned to pre-pandemic levels as social distancing measures kept business capacities constrained and millions of people out of work.

In the fourth quarter, virus conditions deteriorated dramatically, elevating new daily infections to fresh highs and refilling hospital beds. Consequently, the government did not have any choice other than to reimpose internal restrictions, extend travel barriers to the new year, and keep borders with the US closed. Thankfully, promising vaccine news from Pfizer, Moderna and Astrazeneca in November convinced markets that the Covid nightmare could end soon, but distribution difficulties suggest that this may not happen before mid-2021.

Employment to slowdown, but jobless rate to hold steady

Hence, the extraordinary GDP rebound in Q3 may plunge back to the negative territory in Q4, though less aggressively this time as the new lockdown is more generous. Friday’s jobs numbers could provide evidence for this, with markets forecasting new employment to decelerate for the second month and at a faster rate to 20k versus 83.6k in October. Despite the stagnation, the unemployment rate, which has been falling since May, is said to have remained stable at 8.9% and slightly above the 2009 peak of 8.7%. Of course, a smaller jobless rate would be preferable; however, as long as a rebound is avoided, the data may not disappoint markets for now, allowing the loonie to preserve its strength against the greenback. 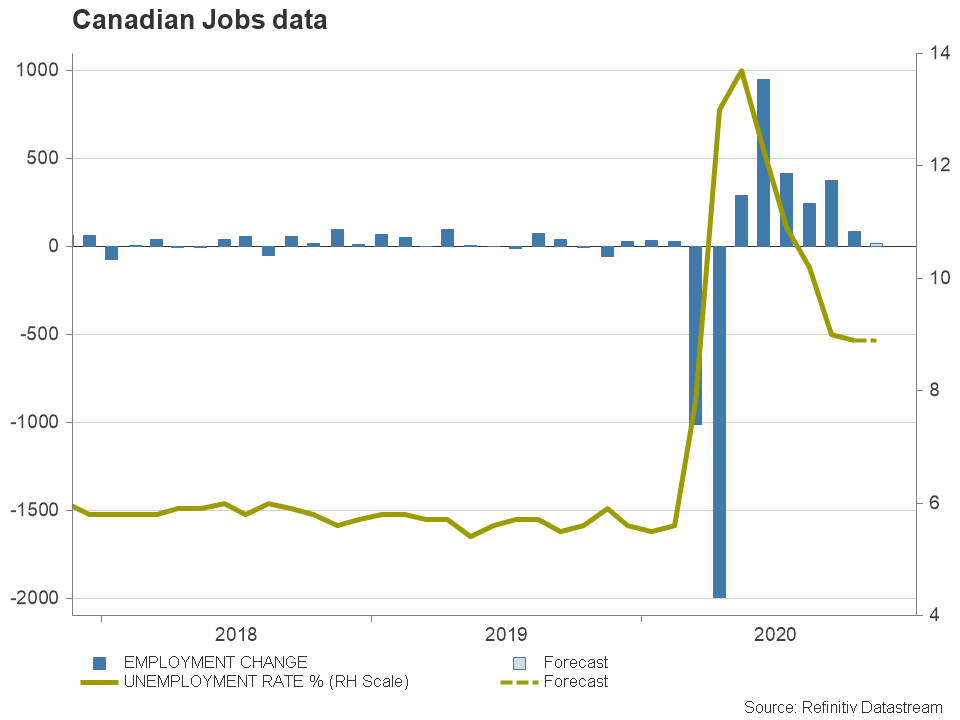 Turning to financial plans, the Canadian government, unlike the US’s, proposed to add $25 billion to existing programs on Monday and inject more (tens of billions) if needed, promising to increase wage subsidy to 75% of business payroll costs among others. The stimulus, however, will not be unlimited as the fiscal deficit could approach the $400 billion number if restrictions tighten this month, with the finance minister Chrystia Freeland highlighting that the unemployment rate and hours of work will be an indication of when spending will ease off or widen. 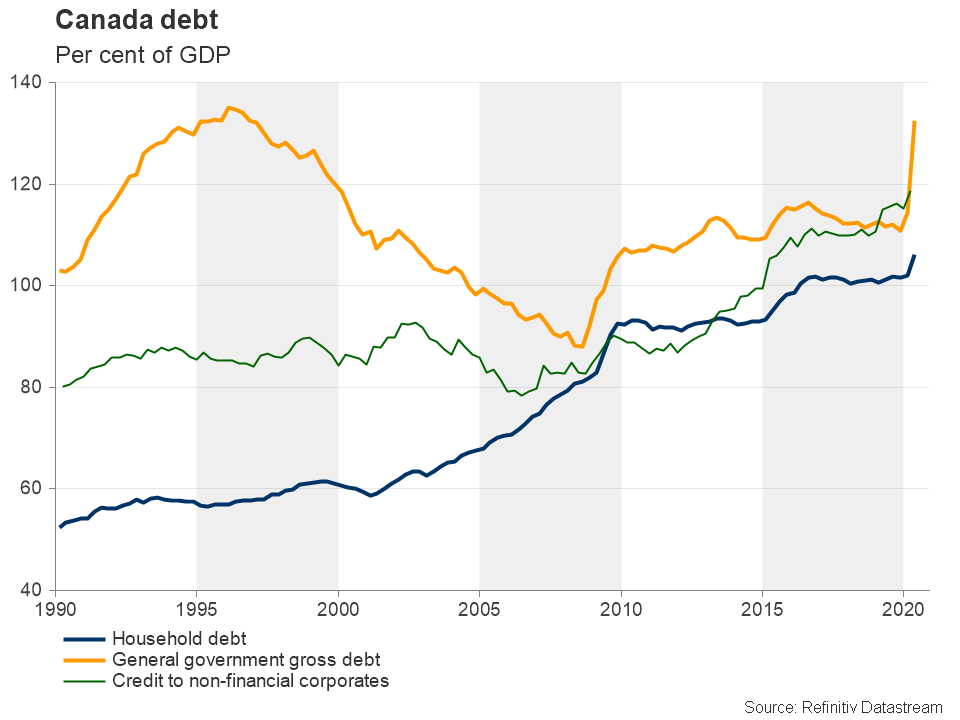 On the monetary front, the Bank of Canada, which has higher interest rates than the Fed and the Bank of England, admitted in October that it could slash its already record low borrowing costs if necessary. Yet, when policymakers meet this month, a rate cut could be talked down in the face of vaccine progress, and discussions may shift towards additional asset purchases instead.

The stimulus-friendly environment in Canada is putting the loonie in a more advantageous position when compared to its US peer and Biden’s victory is further brightening the US-Canada trade relations, which has been grappling in the face of Trump’s protectionism. Oil, Canada’s most exported product, could be another source of growth in 2021 if the removal of restrictions boosts its demand.

From a technical perspective, the loonie aims to extend its uptrend against the US dollar. Having breached the base of the four-month old range of 1.2980 on Monday, USD/CAD could confirm a trend continuation below 1.2900, with support likely coming next around 1.2780.

Besides employment data, the postponed OPEC+ policy meeting could cause some volatility in the commodity-dependent loonie on Thursday after talks over production cuts collapsed on Sunday. Note that the group aims to ease existing output cuts to 2 million barrels per day from January. However, due to the pandemic uncertainty, which pressures demand for the commodity, some producers are reluctant to increase supply.