Canada is not synonymous with the trade war and economic slowdown and yet markets are giving warning signs that the country is headed for a recession. Recent economic indicators have been largely encouraging, pointing to accelerated growth. This week’s upcoming data on inflation (Wednesday, 12:30 GMT) and retail sales (Friday, 12:30 GMT) are expected to be consistent with this trend. And yet the Canadian dollar is hovering near two-month lows versus the greenback on market bets that the Bank of Canada will have to cut interest rates in the coming months.

After a sluggish start to the year, GDP growth picked up a gear in March and the monthly estimates have been beating expectations since. Employment has also been expanding at a healthy pace, with wage growth surging to a decade high of 4.5% in July. Inflation has been on the up too, hitting an above-target 2.4% year-on-year in May.

However, some worrying signs have started to emerge as oil prices have been steadily falling since April, while employment unexpectedly fell by 24.2k in July, pushing the jobless rate up to 5.7%. Inflation has also started to moderate and is anticipated to have fallen further in July.

Inflation to fall below 2%, retail sales to decline

Analysts are forecasting the headline CPI rate to decline to 1.7% y/y in July, potentially giving the Bank of Canada some leeway to ease monetary policy should it need to. But policymakers will likely be paying closer attention to the core measures before considering a rate cut. Two of these three gauges, CPI median and CPI trim were above the BoC’s 2% target in June, while CPI common stood at 1.8%. Should all of them head below 2%, there may not be much left standing in the way of the BoC embarking on a rate cutting cycle. 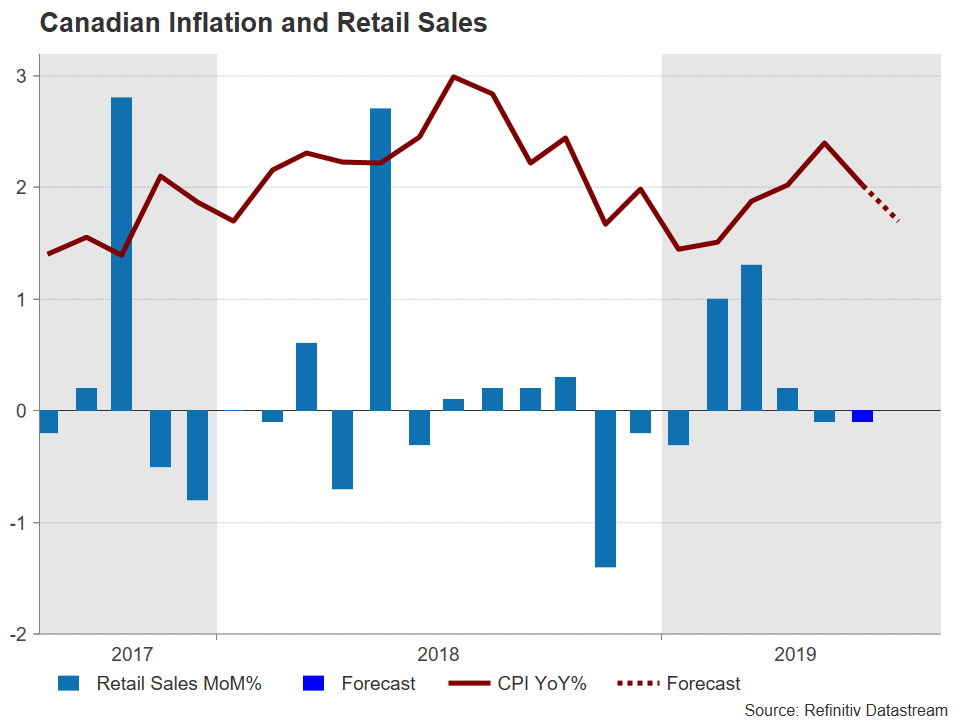 Another clue to whether lower rates are on the cards will come from the June retail sales numbers on Friday. Consumption has been somewhat weak in recent months and they’re forecast to have fallen again, by 0.1% on a monthly basis in June. Such a figure is likely to strengthen the case for monetary easing as it would indicate slowing momentum in the economy.

But whether the data disappoint and reinforce the pessimistic market views that the current upswing is not sustainable, or they produce a positive surprise, alleviating the risk of a downturn, traders appear to have already made up their minds. The yield spread between 10- and two-year Canadian government bonds turned negative in July and the gap has only widened during August as US-China trade tensions have escalated. 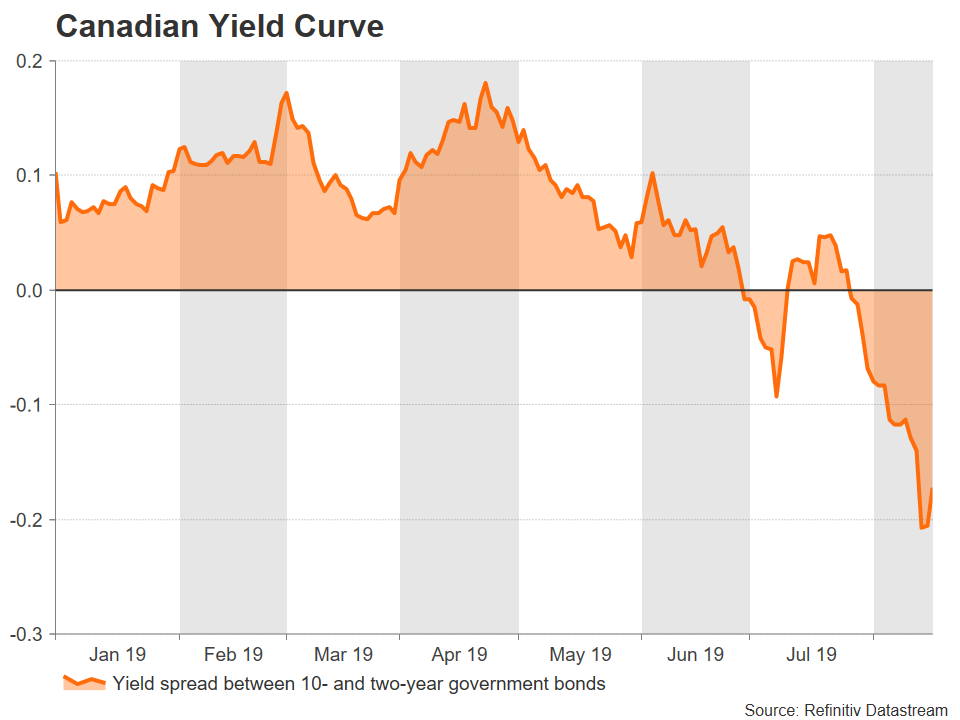 At the same time, expectations that the Bank of Canada will cut rates before the year end have strengthened, with the odds for an October move soaring to about 80%. Should those expectations strengthen further from soft data releases, dollar/loonie could resume the uptrend that it started in mid-to-late July and aim for the 61.8% Fibonacci retracement of the downleg from 1.3564 to 1.3012 at 1.3353. A break above this level would bring into focus the 78.6% Fibonacci at 1.3446.

However, a strong set of figures, combined with a general improvement in market sentiment, could drive dollar/loonie lower towards the 38.2% Fibonacci at 1.3223. If this level is breached, it would clear the way for the 50-day moving average around 1.3180, followed by the 23.6% Fibonacci at 1.3142.