Canada will publish GDP growth numbers for the second quarter on Friday at 12:30 GMT. After a recent run of stronger-than-anticipated releases, the growth figures are not expected to buck the trend and should confirm the healthy state of the economy right now. However, with markets panicking about the fallout of the US-China trade war, Canada is not excluded from the predictions about an impending recession. This is evident in the exchange rate where the Canadian dollar is trading near 2-month lows versus its US counterpart despite the absence of a dovish tilt by the Bank of Canada.

Growth expected to have bounced back in Q2

As Europe and Asia grapple with a slowdown, and even with some cracks starting to appear in the US, Canada’s economy appears mostly immune to the trade uncertainty. Growth moved up a gear in March and the country looks set to post annualized growth of 3.0% in the three months to June. This compares with an expansion of just 0.4% in the first quarter of 2019. 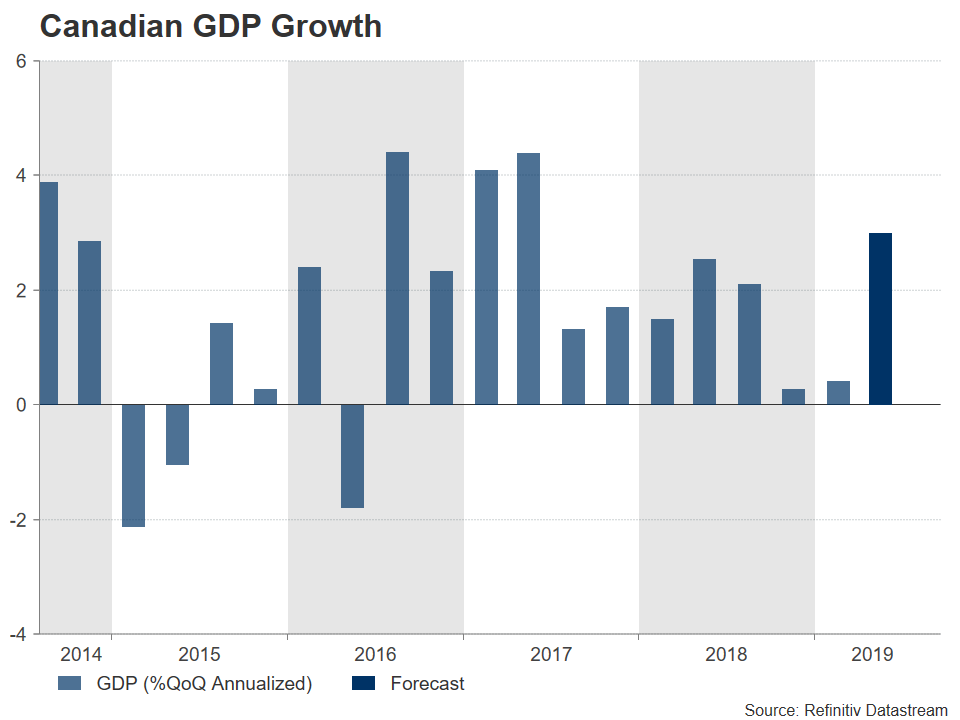 Other indicators have also been solid. Wage growth is at a decade high (although employment has fallen in the last two months), the manufacturing sector is not in the same dire situation as most other nations and, more importantly, inflation is bang on the BoC’s 2% target.

However, investors seem to think it’s only a matter of time before the endless escalation in trade tensions starts to take its toll on the Canadian economy, and that is because the United States – Canada’s biggest trading partner by far – is feared to be heading towards a recession unless there is some easing in the trade dispute.

The yield spread between 10 and two-year Canadian government bonds turned negative in July and the gap has increased sharply in August – a clear warning sign that a recession is approaching. In fact, the negative spread between Canadian 10-2 year yields is much wider than that of the US, which is only just below zero. That can probably be explained by the fact that the US Federal Reserve has responded to the market signals by shifting to an easing bias whereas the Bank of Canada has yet to do the same.

Few clues from Bank of Canada on future policy

The BoC next meets on September 4 and it’s unclear whether policymakers will join their global peers in becoming more dovish and flag a rate cut or stick to the same cautious language as in their last statement from the July 10 meeting. Governor Stephen Poloz and his colleagues have been on a bit of a hiatus during the summer period, keeping investors in the dark as to what to expect.

However, there was one big clue in the July statement and that is policymakers switched the focus from data dependency to the impact of the trade tensions. This suggests the Bank is open to overlooking solid incoming data and cutting interest rates to cushion the economy from the damage of the trade war. But with federal elections coming up in October, the BoC will probably want to avoid signalling a policy change until after the elections.

In the more near term, a good GDP figure is likely to provide the Canadian currency some support as dollar/loonie attempts to break above its 200-day moving average (MA) at the 1.3310 level. If this resistance holds and the data doesn’t disappoint, the pair could retreat back towards the 38.2% Fibonacci retracement of the May-July downtrend at 1.3223. But if the GDP report fails to excite traders and the 200-day MA is overcome, the next big test for dollar/loonie on the upside will be the 61.8% Fibonacci at 1.3353 before setting sights on the 1.34 handle.