After the Bank of Canada slashed interest rates this week, expectations are running high that more will follow, and the next clue may come from Canada’s jobs numbers on Friday (13:30 GMT). While the BoC’s bigger-than-expected cut this week was primarily motivated by the virus fallout, there have been a few other trouble spots lurking in the Canadian economy lately, which could weigh on the struggling loonie if they appear to have impacted employment growth in February.

Despite GDP growth slowing down sharply in the second half of 2019, Canada’s labour market remains in good shape and the jobless rate has fallen back to 5.5% after spiking higher in November. The number of new jobs added increased by a healthy 34.5k in January.

However, it may become more difficult to maintain such growth going forward as there were several factors weighing on economic activity in February. Businesses have been facing substantial disruption from ongoing demonstrations against a pipeline project where protestors have been blocking key passenger and freight rail routes across the country. Bad weather and a province-wide teachers’ strike also likely dampened growth in the first quarter to date.

Analysts are forecasting that job creation slowed to 10k in February and the unemployment rate ticked higher to 5.6%. A worse-than-expected headline figure would accentuate concerns that the impact of the February disruptions was far more severe than anticipated and that the BoC might have to compensate for both domestic and external weaknesses. 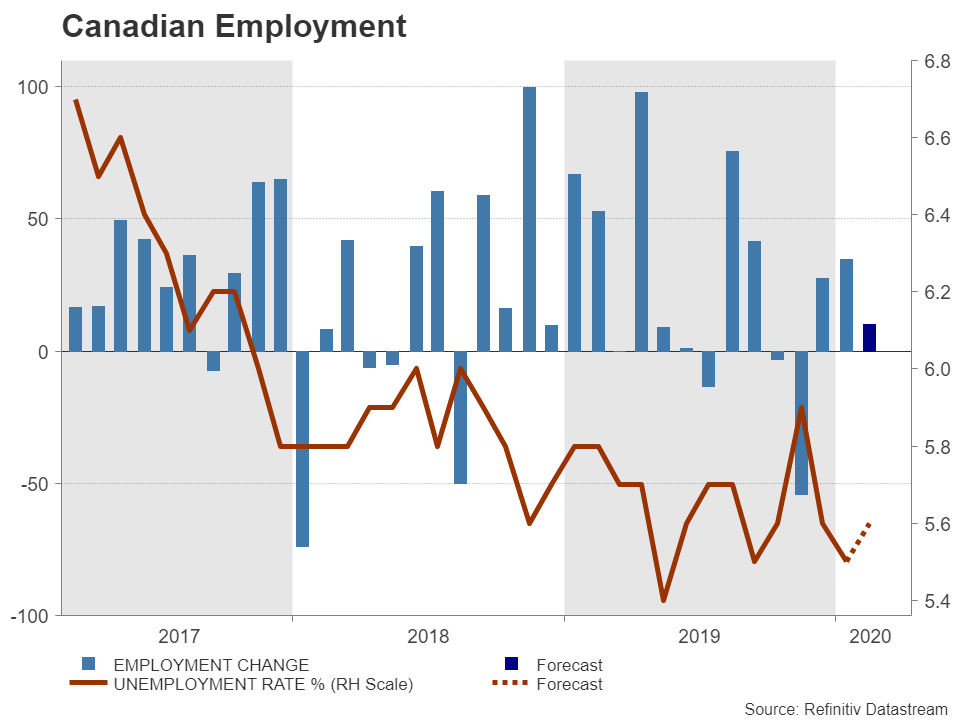 Having fallen dangerously close to last week’s 9-month trough, the Canadian dollar is at risk of slipping to fresh lows if the labour market data raise alarm bells about the economy. In such a case, dollar/loonie is likely to break above the immediate resistance area between 1.3430 (a previous congestion point) and 1.3464 (Friday’s 9-month high). Clearing this obstacle would turn attention to the 1.35 handle, and specifically, the May 2019 top of 1.3564.

However, should the jobs figures meet or even beat the forecasts, dollar/loonie is susceptible to a small downside correction. Initial support to a negative move could arrive at 1.3345 – a previous support and resistance area, while deeper losses could see the pair retreat towards the 23.6% Fibonacci retracement level of 1.3285 of the 2017-18 uptrend.

Risks for loonie tilted to the downside

But even if the loonie is able to avoid plumbing to new lows this week, the short- to medium-term risks for the currency are tilted to the downside. The loonie’s exposure to oil prices – due to Canada’s dependency on energy exports – and its lack of safe-haven appeal (unlike the greenback), as well as the BoC’s sizeable room to cut make the local dollar more vulnerable to a deterioration in the global economic backdrop emanating from the coronavirus outbreak.

The loonie’s best hope of forming a floor under its latest slide may rest on OPEC and its allies and how successful they are in arresting the decline in oil prices via production cuts.