OPEC members tentatively agreed on Thursday to deliver a larger output cut than they initially proposed last month in the face of the coronavirus outbreak. But it is now up to Russia to approve it when it joins the meeting on Friday. While it is almost certain that Moscow will cave in, there is little optimism that the announcement will trigger the much-needed sustainable rally in oil markets even though a short-lived upside correction cannot be ruled out in the near-term.

Russial may not be happy, but will accept the proposal

Russia sought more time early last month to think over another supply cut proposed by OPEC’s biggest oil producer Saudi Arabia that aims to mitigate the demand risks from the fast-spreading Covid-19. Perhaps it was wise that it did not want to rush to slash production before it gets enough evidence that the impact from the coronavirus is indeed a serious headwind to global growth. On top of that, the 2019 supply cut agreements did little to shore up prices, so there was no motivation to support further reductions.

However, with infection cases accelerating worldwide recently, stocks plunging along with commodity prices and business indicators confirming the negative impact from the virus, Moscow has only one option if it wants to contribute in countering the sell-off in oil markets, and that is to approve the plan.

Specifically, the initial plan was to ease production by another 600,000 barrels per day (bpd) only for the second quarter in addition to the 500,000 bpd reduction agreed in December that increased the total output cut to 1.7 million bpd through Q1.Yet, that idea was placed before the coronavirus’ rapid spread in February, and now OPEC is leaning towards a deeper cut of 1.5 million bpd in the second quarter and an extension of the existing pact that expires this month to the end of 2020 – that would increase the total output reduction to 3.6 million bpd, which would be the highest since financial crisis.

Russia’s main objection to OPEC’s plans for productions cuts is its fear that continuous supply restrictions would hurt its market share and discourage new projects, giving more room to its US rivals to expand in the market. Moreover, the international benchmark Brent crude price is currently comfortably above its break-even oil price which is said to be lower at $42.20 per barrel for 2020 compared to $48.00 in 2019. Therefore, the government can still afford further price downfalls and be in a more comfortable position than the US whose break-even price is higher at $45.00. 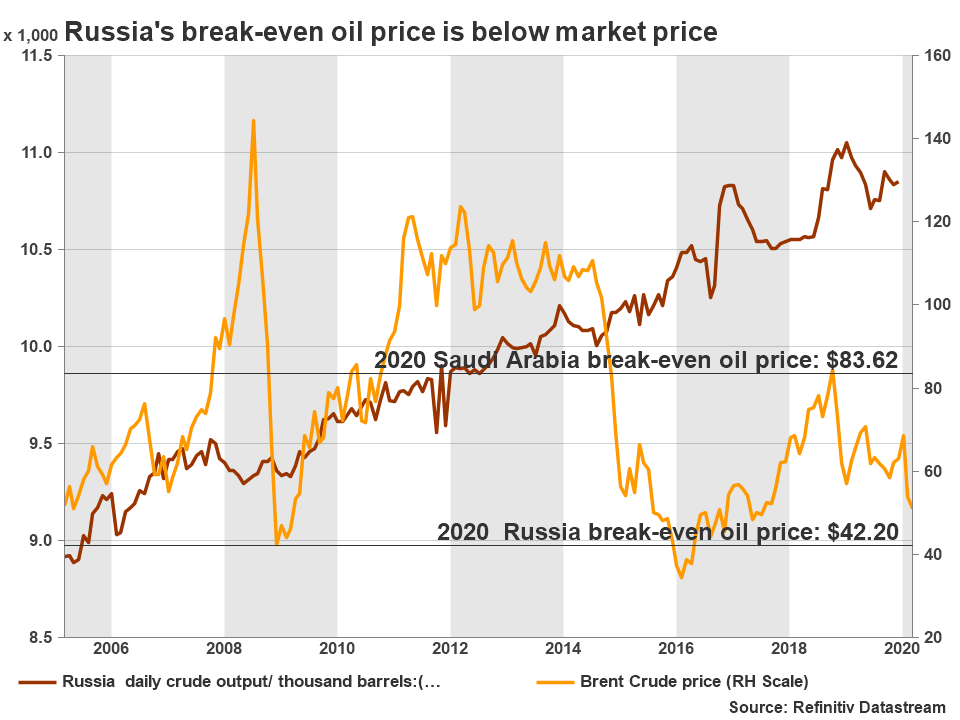 Nevertheless, as the Russian president has admitted, this does not mean there isn’t a need for action together with its international partners at this crucial period for the global economy. Besides, it would not be wise to oppose the plan and break its healthy relations with the group at a time when demand forecasts are plummeting and tensions in the Middle East are somewhat elevated.

Maybe in the future opposing views on output cuts could challenge Saudi-Russian relations. But for now, Saudi Arabia, which is struggling to meet its fiscal break-even oil price above $80 and has been voluntarily over-complying to the existing pact, will keep pressuring Russia to accept the plan this week. And once again, Russia will probably agree but not without trying to negotiate a relatively smaller share of contribution – non-OPEC states are said to slash daily output by 500,000 bpd.

How markets could react?

Still, as regards the market reaction, a 1.5 million bpd supply cut may not activate a long-lasting rally in oil markets as OPEC desires unless an official cure for the coronavirus is discovered.

In the near term, however, oil prices, which slid more than 20% so far this year, and commodity-linked currencies such as the Canadian dollar, could enjoy a bit of strength if Russia fully backs OPEC’s proposal.

On the other hand, the worst-case scenario would be if Russia accepts the extension of the existing cuts to the end of 2020 but rejects the sharper 1.5 million output reduction in the second quarter, forcing OPEC to go it alone.

Meanwhile in currency markets, the focus will be on the Canadian dollar, which is positively correlated with crude prices as oil is Canada’s major export product. Any positive news from the OPEC+ meeting on Friday could allow the loonie to recover some lost ground against the US dollar after diving by 3.5% so far this year. As such, USDCAD could slip below 1.3400 and the broken descending trendline to meet support within the 1.3345-1.3300 region. Otherwise, if OPEC’s plans collapse, the pair could re-challenge its recent peak of 1.3365 before meeting the 1.3500 round-level.