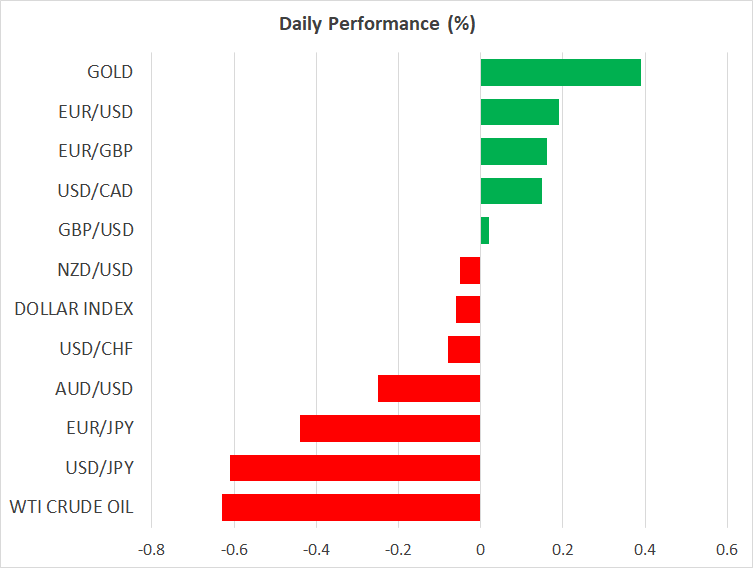 Global markets finally took note of the many risks around them on Thursday, amidst clearer signs that the US recovery is stalling, seething US-China tensions, and headlines about antitrust probes into ‘big tech’. Investors started to turn cautious after a disappointing batch of jobless claims out of the US, which signaled that the slowing recovery may have already sparked a new wave of layoffs.

That was followed by reports that Apple (-4.5%) will be the subject of an investigation by multiple US states about deceptive trade practices, which comes amid a multi-month monopoly probe by the House of Representatives into the ‘big four’ tech platforms. The antitrust committee is expected to release its findings in the coming weeks.

This naturally knocked the wind out of high-flying giant tech stocks, with the Nasdaq closing 2.3% lower and futures pointing to another negative open today. Make no mistake, this is a major risk. Big tech names have been the real driving force behind the stock market’s recovery, so anything that puts that leadership in jeopardy could have seismic effects on the entire market.

Another worrisome set of US virus numbers, coupled with signs that Congress is unlikely to pass the hyped stimulus bill before crucial benefits expire next week, and some ‘cold war-era’ remarks by US Secretary of State Pompeo against China, didn’t help either.

Stocks down, yen up, but dollar still crushed

The result was a classic ‘risk off’ reaction, with stock indices retreating alongside commodity currencies as investors took refuge in the safety of government bonds, the Japanese yen, and gold. Not even a batch of highly encouraging PMIs out of Europe earlier today was enough to change the cautious mood.

The odd one out, was the dollar. The greenback had transformed into a haven currency during this crisis, essentially becoming a mirror reflection of stock markets, but lately that inverse relationship seems to have broken down.

One reason why is the unrelenting rally in the euro, after EU leaders took a step closer towards a risk-sharing mechanism this week, which has long been the Eurozone’s Achilles’ heel. Another factor may be the economic slowdown in the US giving rise to speculation that the Fed will have little choice but to act again next week, which in turn is pushing down on Treasury yields and is eroding what little rate advantage the dollar had left.

The clear winner in all this is gold, which benefits both from lower yields and from a weaker dollar, and is currently approaching the $1900/ounce handle.

But doubtful whether this is a turning point

In the bigger picture though, this seems like a correction after a powerful rally for riskier assets, not necessarily a turning point. The market has been able to absorb a lot of bad news in recent months without even flinching, and one could even argue that such a mild retreat is bullish in itself, given how discouraging the headlines have been. 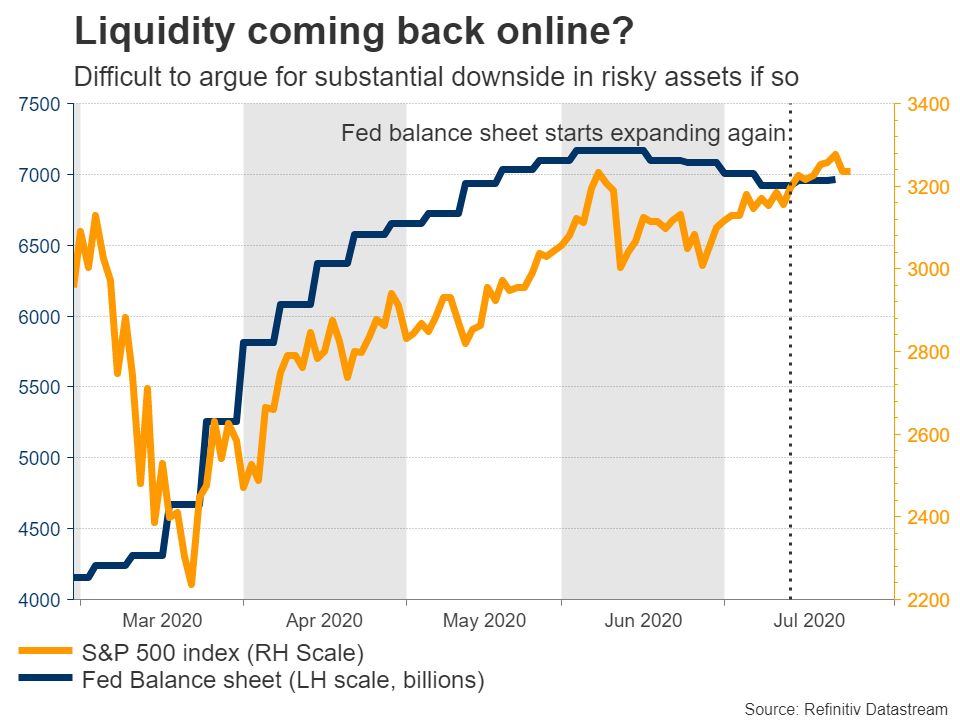 Plus, arguably the most important chart for financial markets – the Fed’s balance sheet – has started to expand again. Liquidity is a hell of a drug as everyone was reminded of lately, and fighting such a force is tough, especially when another multi-trillion fiscal package is in the works too. It would probably take some major event that invokes full-blown panic and fear of loss for markets to truly correct lower amidst this ocean of liquidity.

As for today, the US Markit PMIs for July will be eyed for more clues around the resilience of the US recovery.