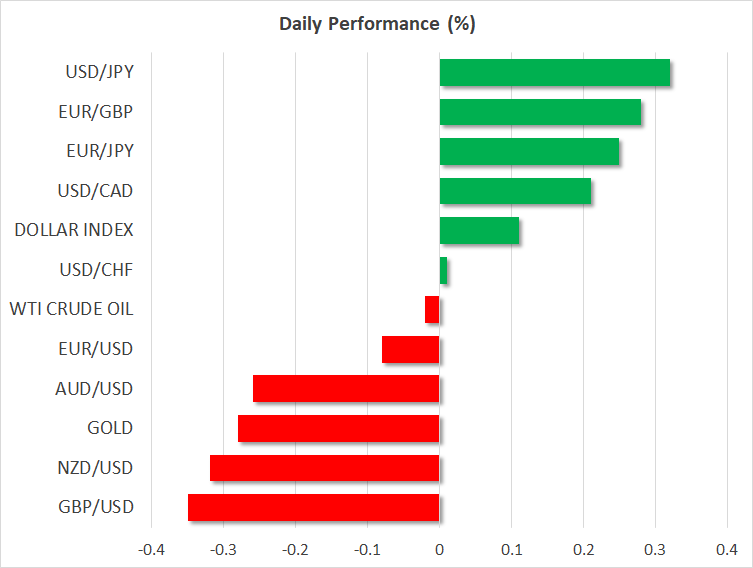 Dollar bears pause for breath as Congress in race against time

The US dollar was attempting to end its week-long losing streak on Friday as doubts about how soon a stimulus deal in Congress and a Brexit trade pact between the UK and EU can be finalized helped the world’s reserve currency to claw higher.

All the indications from Capitol Hill are that a bipartisan deal is within reach but that talks will likely stretch into the weekend, at least according to Senate Majority Leader Mitch McConnell. The spiralling cases of Covid-19 in the United States have added a renewed sense of urgency for lawmakers to move past bitter partisan divisions and unite behind a new stimulus plan to provide a fresh round of virus relief for millions of struggling businesses and households.

Weekly jobless claims rose for the second straight week yesterday to 885,000 – the highest since mid-October. It comes hot on the heels of Wednesday’s dreadful retail sales report, heightening concerns about the US recovery.

Congressional leaders are aiming to conclude talks before Christmas but may need to pass another stopgap government funding bill if there is no agreement by today. The size of the stimulus package is thought to be in the region of $900 billion but leaders want this attached to the $1.4 trillion spending bill that’s mostly been agreed.

The long wait for a deal has dented some of the past days’ optimism, making way for mild caution today. The dollar index is trading slightly above 32-month lows but the only other safe haven on the up was the Swiss franc as both the yen and gold were under pressure.

The firmer dollar pulled gold down from one-month highs after three strong days of gains. But the yen took a bit of a beating after the Bank of Japan signalled it is looking into ways at making its policies more effective so that it can meet its inflation goal, raising suspicion as to what its next move will be after keeping policy on hold today.

The greenback was last hovering around 103.40 yen, rebounding substantially from yesterday’s 9-month trough of 102.86.

Sterling was another poor performer as conflicting headlines on the state of the Brexit negotiations undermined hopes that a trade deal was imminent. Comments of “substantial progress” and “edging towards a deal” from the EU side contrasted with a gloomier view by British Prime Minister Boris Johnson. Following a phone call with his European counterpart on Thursday, Johnson said the talks were in a “serious situation” and that a no-deal was now “very likely”.

Even if this was an attempt by Johnson to ratchet up pressure on the EU to back off on some of its demands such as those for fishing rights, it’s looking increasingly likely that the negotiations will continue into the last week of December.

Equities softer but rebound may already be underway

Elsewhere, the commodity-linked aussie, kiwi and loonie eased from multi-year highs, though they were still on track to finish the week with solid gains.

Stocks in Asia ended the day mostly lower as the increased risk aversion offset yet another record day on Wall Street on Thursday. However, the mood improved somewhat by the European open, with shares in the region turning positive, along with US futures, though the trend could easily switch again during the course of the day.

It’s that time of the quarter when single-stock and stock index options and futures are set to expire so investors should be braced for some possible choppy trading. 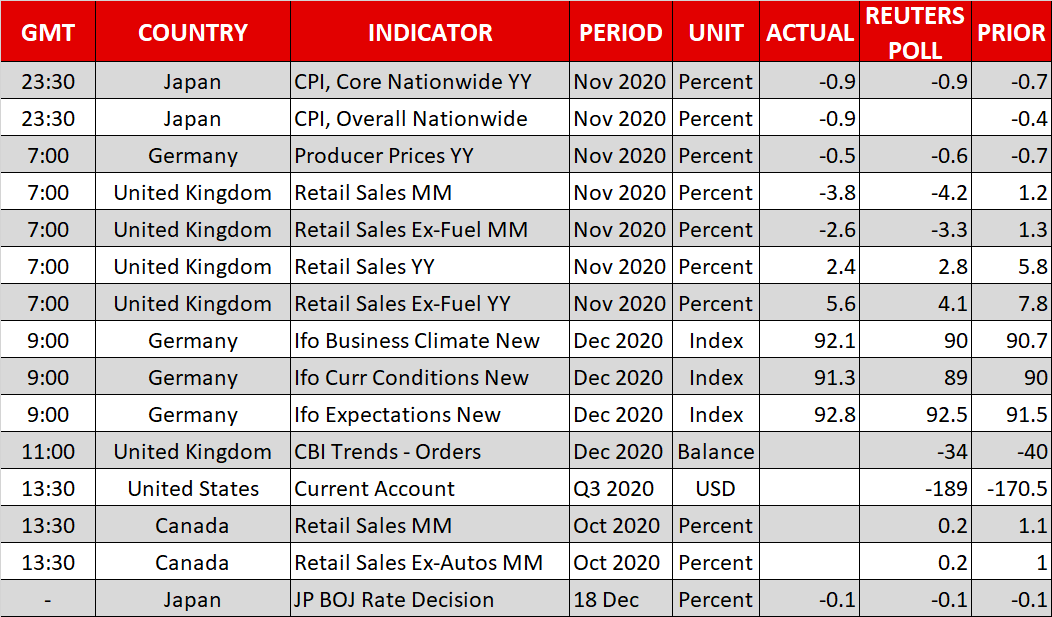