Daily Market Comment – Dollar gets a second wind after US payrolls, can it last? 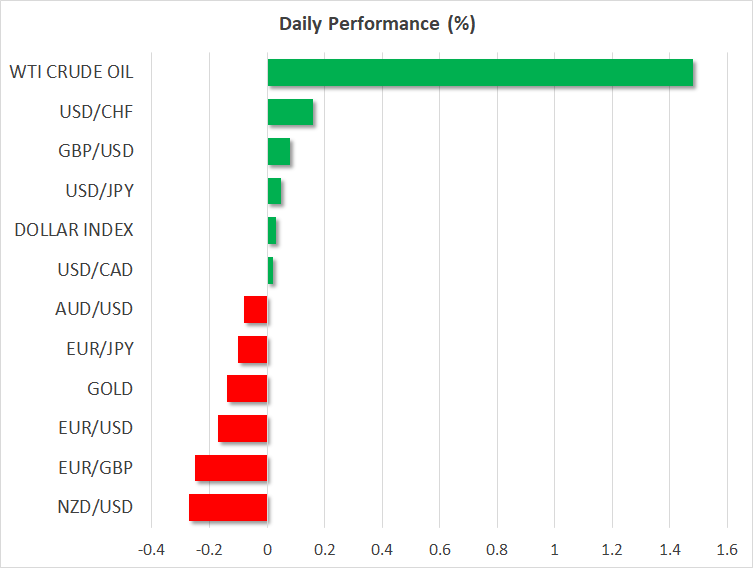 Dollar shorts get squeezed after payrolls

The world’s reserve currency got a second wind on Friday, recovering some lost ground after a decent US employment report saw traders cover or trim some of their previous short positions, which have approached record levels lately. Nonfarm payrolls rose by 1.76 million in July, more than the forecast of 1.6 million. That pushed the unemployment rate down to 10.2%, from 11.1% previously.

While these appear decent at first glance, it’s important not to lose sight of the bigger picture: this data reflect the second week of July, so the disruption caused by the latest wave of infections in America will mostly show up in next month’s numbers. Plus, at 10.2%, the unemployment rate remains higher than at any point during the Great Financial Crisis, leaving little room for celebration.

The wind of change for euro/dollar?

Yet, it’s not all bleak, at least for the dollar. The founding pillar of the recent rally in euro/dollar has been the perception that Europe will recover faster than America, thanks to better management of the health crisis. That has been a reasonable assumption so far, though the winds of change may be blowing.

Daily US infections are still far higher than those in Europe, but if one strips out the absolute numbers and just looks at the trend, America is slowing down while Europe is sadly accelerating again. This was only natural after much of Europe relaxed travel restrictions, and it may be too early to call this spike a second wave, yet the point stands: if this contagion trend continues, the narrative that Europe will ‘out-recover’ the US might take a beating soon.

Combined with record bullish positioning on the euro according to the latest CFTC data, it probably wouldn’t take much to ignite a material setback in euro/dollar after such a relentless move higher. Arguing in the same direction is the Turkish lira, which has resumed its freefall to hit fresh record lows. If this develops into a full-blown currency crisis, it might torment Europe more than the US, as the European banking system is far more exposed to Turkey.

Trump bypasses Congress, gets leverage back

The other piece of big news over the weekend was that President Trump signed a series of executive orders to provide more assistance to struggling Americans, bypassing the stalled negotiations in Congress. The White House froze evictions, paused the payrolls tax, provided relief for student loans, and extended the extra unemployment benefits – albeit at a reduced rate of $400/week from $600/week previously.

Yet, there was barely any reaction in the markets on Monday. Why? Most likely because there is ‘bad news’ behind the seemingly ‘tremendous’ headlines. The Democrats so far were holding out for a bigger stimulus package in these negotiations, confident they had all the leverage.

Now though, the political urgency to strike a deal has evaporated, and in all probability, any package will be closer to the $1 trillion the Republicans were pushing for rather than the $3 trillion the Democrats were advocating. Ultimately, this may argue for a slightly stronger greenback as the deficit won’t go entirely berserk, but it’s bad news for stocks and perhaps risky assets more broadly.

As for today, the economic calendar is almost empty, with the only highlights being the US job openings for June and some remarks by the Fed’s Evans at 20:00 GMT.