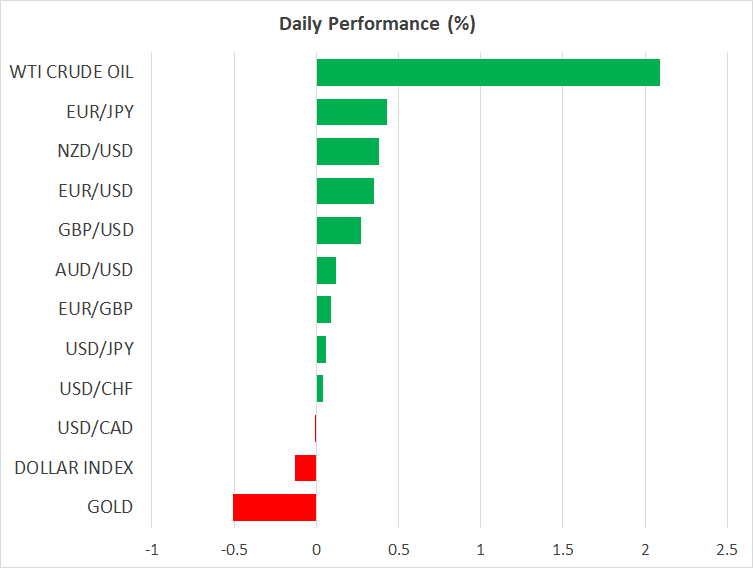 Markets shrug off US unrest, look to recovery

After a brief scare on Tuesday, it didn’t take long for risk appetite to get back into full mode as investors largely ignored growing unrest in the United States to instead focus on the increasing signs that a recovery from the pandemic is well under way. Although there is little to suggest that the protests raging across many US cities are subsiding – if anything, public anger against racial injustice is worsening as protesters break curfews – markets seem to view the latest demonstrations as a common phenomenon that occasionally grips the country, hence, the muted response.

Investors also appeared to be not too concerned about the Trump administration’s decision yesterday to investigate countries that are planning on taxing digital companies, which would mainly hurt US tech giants such as Alphabet and Facebook. With US-China tensions also still brewing in the background, equities have never looked so disconnected from the economic reality.

Yet, as governments and central banks around the world send clear signals that they are on standby to press the stimulus button, it shouldn’t be too surprising for optimism to prevail. South Korea’s government announced its third fiscal package today and Germany, the UK and the US are likely to see additional fiscal stimulus in the coming months as well.

Even the economic data is now starting to support the notion that the worst is over, with China’s services PMI rising above the expansionary 50 level in May for the first time since January and Eurozone services PMIs being revised up.

Global stocks extended their gains on Wednesday as investors took heart from the images of shoppers lining up outside reopened stores as lockdown restrictions are gradually relaxed across many countries. However, the positive sentiment weighed on safe havens as the yen and franc stumbled and the US dollar nosedived.

Gold also came under pressure but remained comfortably within its recent range as some traders remained cautious about the economic outlook given the potential risks from a second virus wave and worsening Sino-US relations.

The dollar index slipped to a 12-week low as the euro and pound surged on the back of the rising hopes of recovery. The euro broke above the $1.12 level for the first time since mid-March, while the pound approached the $1.26 level amid some improvement on the prospect of a post-Brexit trade deal between the UK and the EU.

Commodity-linked currencies were not excluded from the rally. The Australian dollar soared to 5-month highs after GDP data showed the Australian economy contracted by just 0.3% quarter-on-quarter in the three months to March.

Loonie hits C$1.35 ahead of BoC and OPEC+ decision

The Canadian dollar is finally playing catch up to the aussie and kiwi, jumping by about 300 pips since Monday to reach a near 3-month peak of C$1.3476. While the improving risk tone is the main driver of the loonie, higher oil prices have also been aiding the currency. Oil prices continued their ascent on Wednesday, with Brent hitting $40 a barrel, on expectations that the OPEC+ group of countries will extend the deep output cuts for a few more months when they meet on Thursday.

But with Saudi Arabia pushing for a three-month extension and Russia indicating it wants one month, the oil rally is at risk of faltering if the two sides fail to find a compromise.

In the meantime, the Bank of Canada is expected to keep its policy unchanged when it meets later today. However, investors will be eager to see whether the new governor, Tiff Macklem, will signal any shift in the BoC’s policy stance and whether more QE is on the cards.