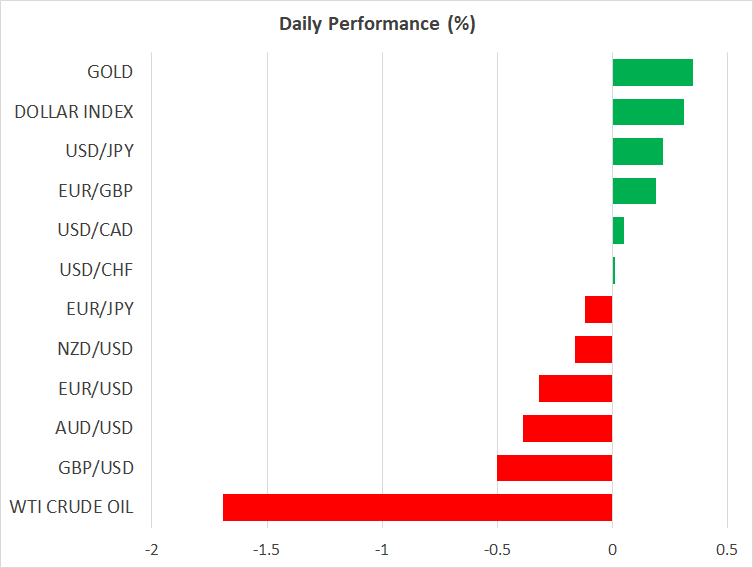 The US dollar fought back on Thursday to retain its reign over FX markets, which has come under threat over the past week as rising optimism about the global economy recovering from the pandemic has revived risk assets. The dollar index, which measures the greenback against a basket of currencies, edged up by about 0.25% at the start of European trading as major stock indices turned red following a mixed session in Asia.

US stock futures were also pointing to losses on Wall Street today. However, there is little to suggest that the setback is anything more than some long overdue profit taking following an unstoppable rally since mid-May. With the US and China demonstrating some refrain in their latest squabble, the mass protests in the US turning more peaceful and the incoming data beginning to support the view that there is a recovery underway, the risk rally looks far from done.

The Nasdaq 100 is flirting with record territory, while the S&P 500 just broke the 3,100 barrier for the first time since March even as millions of Americans are still out of work. But there is growing evidence that the tide is turning. The private employment survey by ADP yesterday showed far fewer Americans lost their jobs in May than expected, signalling Friday’s official jobs report will be similarly positive. The closely watched ISM non-manufacturing PMI also came in above forecasts.

Add to that the flurry of fiscal stimulus announcements, most recently by Germany and Australia, it shouldn’t come as too much of a surprise why investors are increasingly bullish about the outlook. Still, with the White House dragging its feet on another fiscal package in the United States, those traders holding out for another mega stimulus from Congress might have to wait a while longer.

One region that won’t have to wait very long for extra stimulus is the euro area. The European Central Bank is expected to announce an increase in its pandemic emergency purchase program later today as it struggles to keep periphery yield spreads from widening. The euro, which has just reclaimed the $1.12 level, is likely to benefit from additional stimulus as this would further boost the brightening outlook for the Eurozone economy.

However, there is a risk that the ECB may deliver something less than the €500 billion being anticipated or that policymakers might put off their decision until after the European Union has reached a deal on a virus rescue fund. A disappointing announcement from the ECB would weigh on both the euro and European stocks, which have been on a roll lately.

In other currencies, the pound also came off its highs on Thursday, retreating sharply from the $1.26 level on news that the Bank of England is warning UK banks to prepare for a no-deal Brexit. Traders will likely be keeping an eye on Brexit-related headlines over the next 24 hours when UK and EU negotiators wrap up their latest round of talks.

Oil prices headed lower on Thursday, pulling away from 3-month highs, as doubts emerged about whether or not OPEC and its allies will be able to reach a deal on extending the steep output cuts that were brought in to stave off an even worse collapse in prices from the virus fallout. WTI and Brent crude were last trading about 1.8% lower.

A Reuters report suggests Saudi Arabia and Russia have agreed to extend the deal by one month into July. However, the agreement is conditional on other members of the OPEC+ pact abiding fully with their production targets amid frustration with some countries like Nigeria and Iraq that are failing to comply.

The doubts about the production cuts weighed slightly on the Canadian dollar, which was unable to advance even after the Bank of Canada sounded less gloomy at its policy meeting yesterday, saying the virus impact “appears to have peaked”. 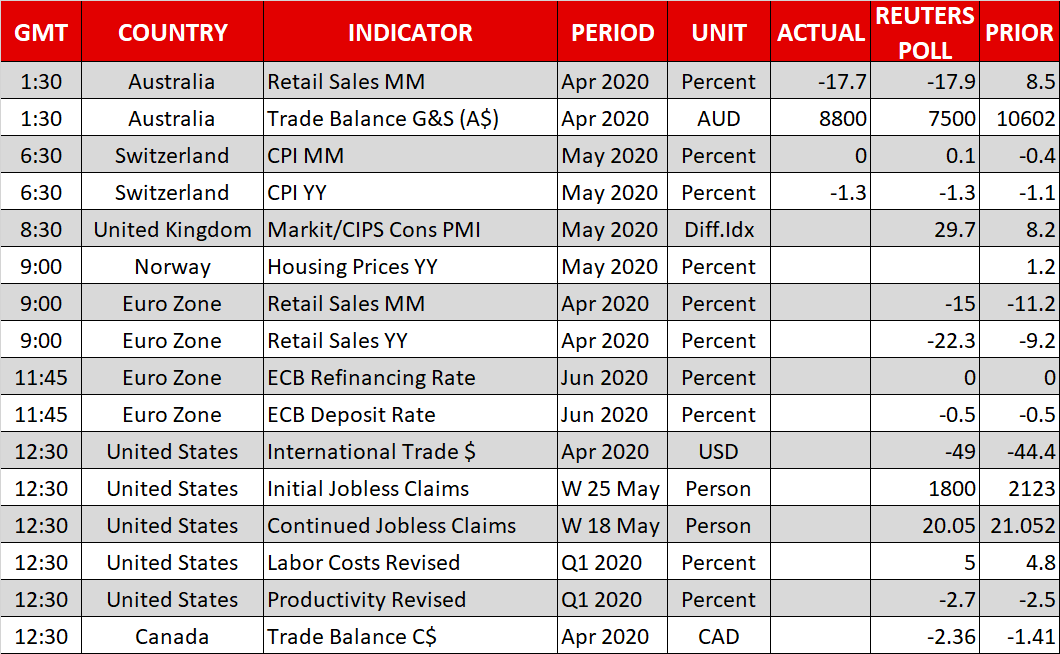