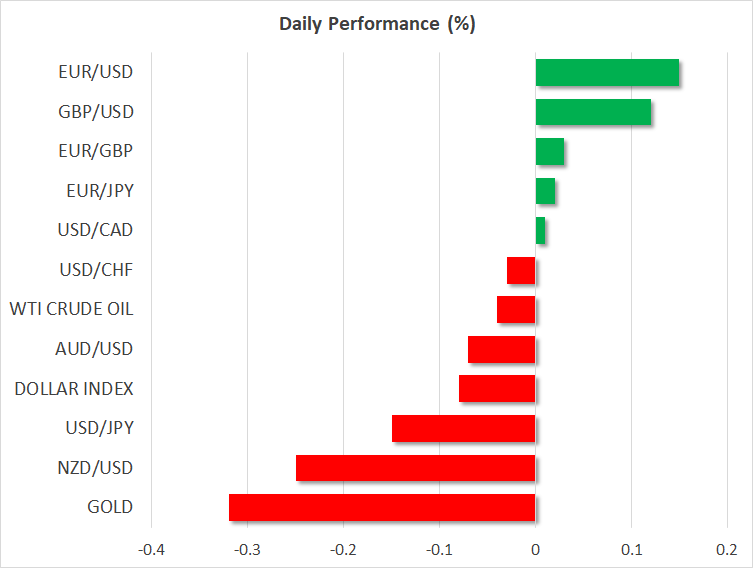 The minutes of the Federal Reserve’s July policy meeting released yesterday have laid bare the extent of the divisions within the Federal Open Market Committee (FOMC) over the need for lower interest rates amid mixed signs about the health of the US economy. While a “couple” of committee members argued for a deeper 50 basis points cut in July, “several” members favoured keeping rates unchanged. The committee was also keen not to appear that it was on a “preset course” but wanted to remain flexible regarding the outlook.

The dollar headed higher after the minutes as a split Fed makes aggressive rate cuts less likely, at least at the next meeting in September. However, Treasury yields were little changed, and markets are still anticipating a total of 100 bps rate cuts over the next 12 months. Against the yen, the dollar remained within its recent range and was last down at 106.35, reversing most of yesterday’s gains.

The minutes also saw a muted response in equity markets, with the Dow Jones closing up 0.9%, boosted by strong earnings results. But the tempered expectations of Fed easing weighed on Asian stocks today and doubts about the likelihood of tax cuts in the US also dampened sentiment.

President Trump seemed to back away from plans to cut taxes on payrolls and capital gains yesterday, having signalled as much only a day earlier. Speaking to reporters, Trump said “I’m not looking at a tax cut now”.

The fading hopes of a big monetary and fiscal stimulus in the United States raised doubts about whether policymakers around the world are doing enough to bolster global growth, and this dragged the Chinese yuan to an 11-year low of 7.0845 per dollar in onshore trading. State-owned banks were reportedly selling dollars to support the yuan.

The ongoing protests in Hong Kong are also seen to be hurting sentiment in the region, keeping a lid on the recent recovery in risk appetite. The risk-sensitive Australian and New Zealand dollar were both weaker on Thursday, with the aussie slightly lower at $0.6770 and the kiwi skidding to a fresh 3½-low of $0.6369. Traders will be watching Q2 retail sales numbers out of New Zealand at 22:45 GMT for clues on RBNZ rate cuts.

The euro crossed back above the $1.11 handle on Thursday after Eurozone PMIs beat expectations in the August flash readings, which helped lift some of the gloom surrounding the Eurozone economic outlook. While the data may be seen as reducing the need for large stimulus measures by the European Central Bank in September, it’s unlikely to be enough to convince policymakers that big action would not be appropriate.

Traders will be hoping the account of the ECB’s July policy meeting (due at 11:30 GMT) may shed more light on what to expect at the September meeting.

Meanwhile, across the channel, British Prime Minister Boris Johnson got a glimmer of hope that the EU may yet allow some tweaks to the backstop. During a visit to Berlin, German Chancellor Angela Merkel gave the UK prime minister 30 days to come up with an alternate solution to the backstop, though Johnson is likely to get a frostier reception when he meets President Macron in France later today who has not changed his stance on the issue.

However, traders were cautious about the prospect of a Brexit deal and the pound kept to tight ranges, hovering around $1.2140. 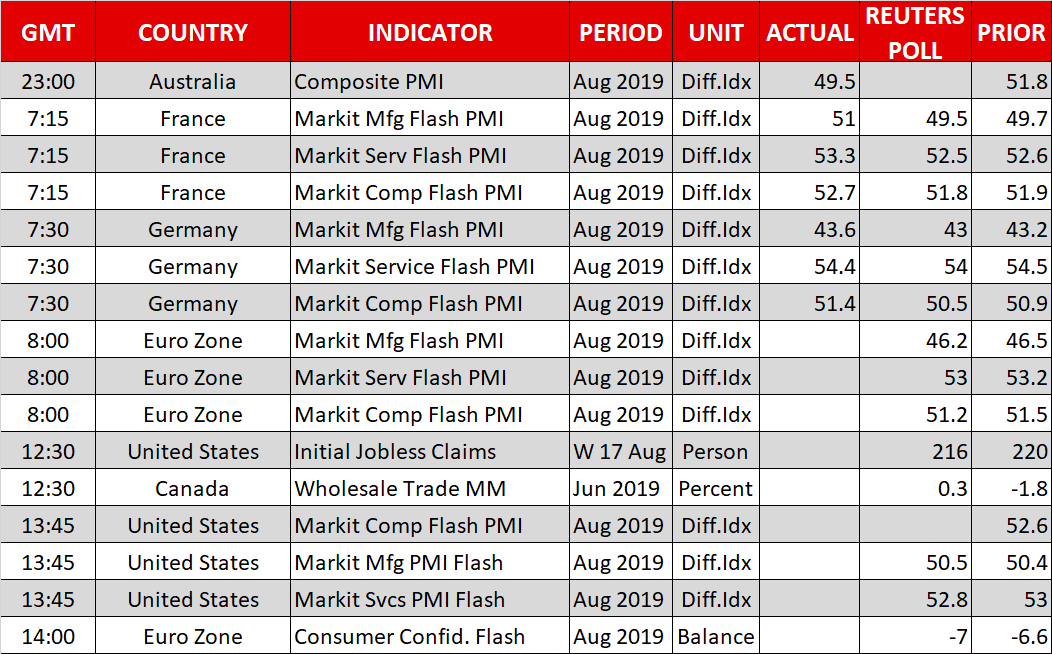