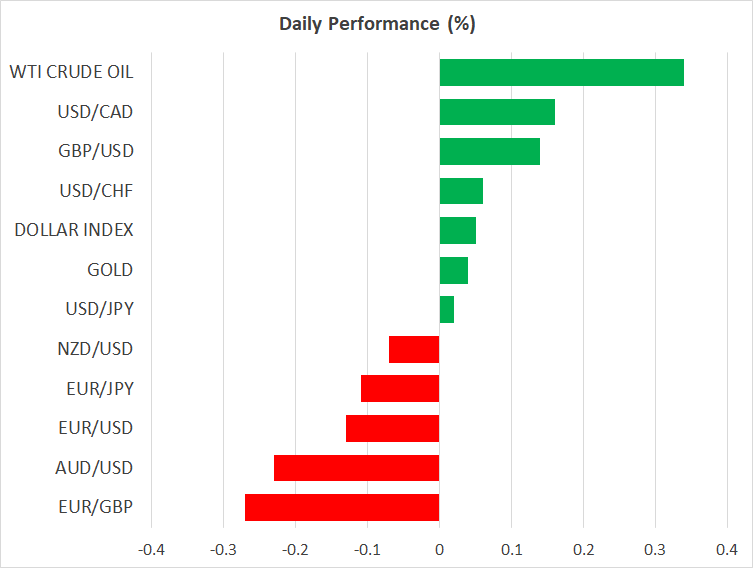 The world’s reserve currency came back under selling pressure on Tuesday as Fed officials poured cold water on speculation around a withdrawal of their massive liquidity programs. The most noteworthy comment came from the Fed’s George, who said the central bank will not react if US inflation tops 2%.

Coming from one of the biggest ‘hawks’ in the FOMC, this allayed tapering concerns and pushed Treasury yields back down, eroding some of the dollar’s recent rate advantage. Yet, investors knew that much already. The real question is whether the Fed will react if inflation nears 3% this year, which looks more than possible in an environment of soaring food, energy, and industrial commodity prices.

The Fed has grown the US money supply at an unprecedented pace, so the only ingredients missing for an inflationary eruption is a tighter jobs market and a pickup in the velocity of money. Those could arrive once the vaccination process is complete and the economy fires up, especially if the Democrats unleash a tidal wave of federal spending. 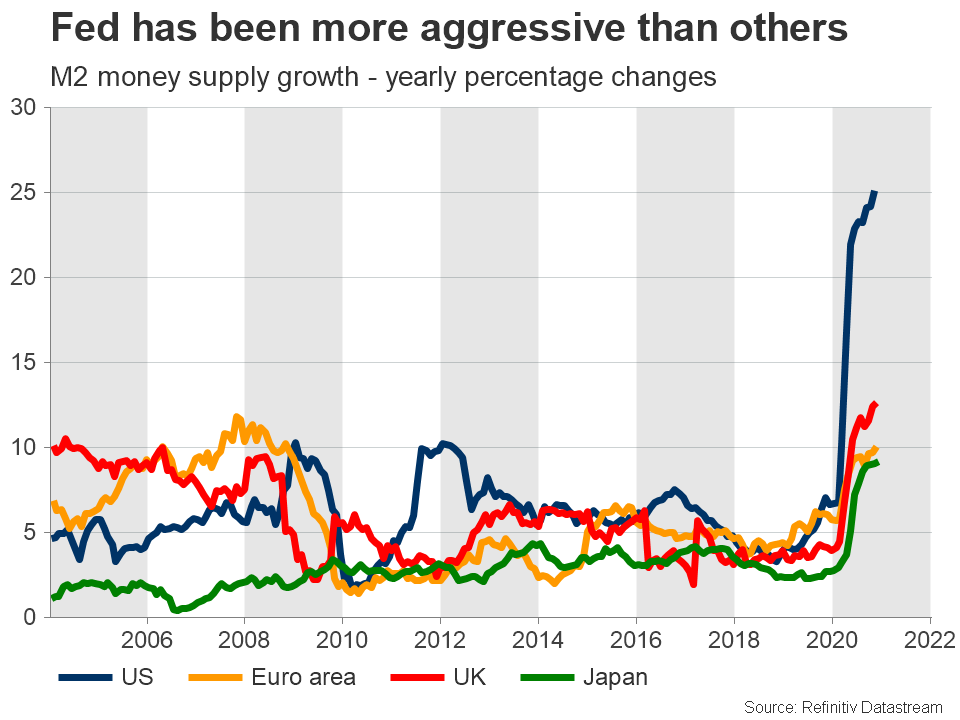 In other words, it may be too early for expectations of QE tapering to support the dollar at this stage, but this could become a central market theme by the middle of the year. We will get an important update on US inflation today, as well as some remarks by Fed Vice Chairman Clarida (20:00 GMT) and Board Governor Brainard (18:00 GMT).

Capitalizing on the dollar’s troubles was the euro, which completely ignored a warning from German Chancellor Merkel that the Eurozone’s economic powerhouse may remain in a lockdown until April. Admittedly, the price action seems bizarre. Europe is far behind America in the vaccination race, its economy will almost certainly suffer a double-dip recession, and there isn’t much stimulus in the pipeline either. If the ECB ever normalizes, it will be years after the Fed.

It appears that what is supporting the euro is deflation itself. If markets expect very low inflation, that pushes real rates up and can oftentimes help a currency, as the calculation for real rates is nominal rates minus expected inflation.

However, this may be a short-term dynamic. Ultimately, capital flows gravitate towards growth, and the US is in a much stronger position there. Therefore, the risks surrounding euro/dollar seem tilted to the downside overall, even though for now a lot might depend on how big of a relief package president-elect Biden promises tomorrow.

In the broader market, the star performers were the British pound and crude oil. Sterling is enjoying a double-whammy of optimism as markets have priced out expectations for negative rates after BoE Governor Bailey played down that idea yesterday and as the UK’s vaccine rollout is progressing faster than Europe’s. Despite the UK currently reporting worrisome numbers of infections, investors think the nation is on track to defeat the virus quickly.

Crude oil has been on a tear as well. It seems that the promises of a US spending extravaganza and Saudi Arabia slashing its crude production in the coming months have more than offset European demand fears, propelling crude above its pre-pandemic levels.

Aside from the US inflation data and Fed speakers today, the impeachment proceedings against President Trump may also attract attention. The House is expected to impeach him, in which case there will be a trial in the Senate. If so, this will absorb a lot of political capital during the first days of Biden’s term, though any market reaction is unlikely.