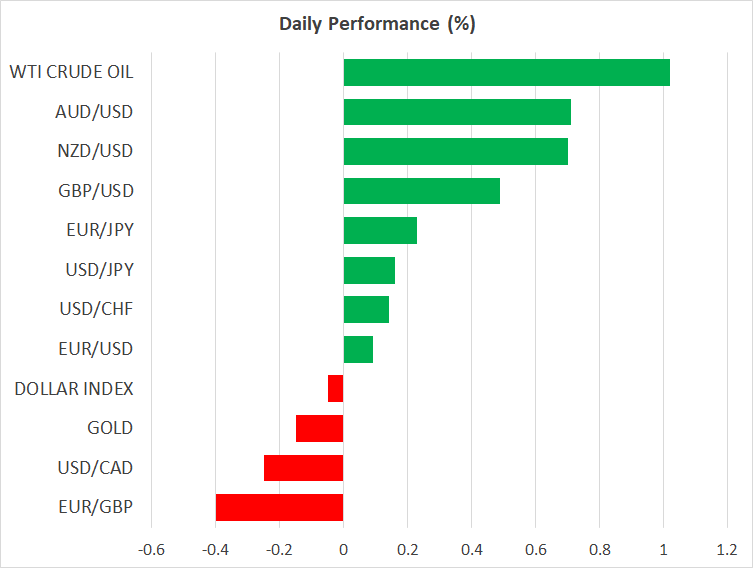 ECB takes out the bazooka again

The resurgent euro, which has been rallying on the back of recovery hopes for the Eurozone economy, got another shot in the arm on Thursday after the European Central Bank delivered a bigger-than-expected stimulus.

The ECB boosted its pandemic emergency purchase program (PEPP) by €600 billion, exceeding expectations of a €500 billion increase. And while the ECB sharply lowered its economic projections, predicting that the euro area economy could shrink by as much as 12% this year in the worst-case scenario, President Lagarde pointed to some signs that the downturn is “bottoming out”.

Her comments underscored the central theme that’s been driving risk assets higher over the past month and that is, a recovery – whatever shape or form – will come in the second half of 2020.

Investors’ growing confidence that the worst is over propelled the euro to three-month highs versus the dollar, coming within sight of the $1.14 level on Friday. There was also relief that the decision appeared to be unanimous, amid some concerns that the ECB hawks would resist additional large stimulus.

Dollar loses shine, can only stand tall versus yen

The increasing optimism wasn’t confined to the euro as all majors as well as emerging market currencies advanced against the mighty US dollar. The Australian dollar was testing the psychologically important $0.70 level even as Sino-US tensions linger in the background.

The Trump administration yesterday announced it will place restrictions on four state-owned Chinese media outlets operating in the United States in response to China’s security grip on Hong Kong. The two countries have also been quarrelling over flight bans in recent days but as long as the ‘phase one’ trade deal remains untouched, markets seem indifferent to the never-ending diplomatic spats.

One relationship that isn’t being ignored, however, is that between Britain and the European Union. Negotiators from the two sides have been unable to resolve differences on key issues such as fisheries and on establishing a ‘level playing field’ after a week of talks. With the end of June deadline for extending the UK’s transition period fast approaching, an EU summit in two weeks’ time may be the last hope for a breakthrough.

In the meantime, sterling was still able to enjoy some positive momentum from the risk-on mood as it surged past $1.26 to reach a near 3-month peak.

In contrast, the dollar sagged, with its index against a basket of currencies on track for a seventh straight session of losses. The greenback could only post gains against other safe havens as it climbed versus the yen and the franc to levels not scaled since late March.

The nonfarm payrolls report for May, due out of the US later today, is unlikely to be able to provide much support to the dollar even if America’s jobless rate doesn’t jump to almost 20% as is being anticipated.

On-off OPEC+ meeting back on

Gold was unable to take advantage of the dollar weakness as it hovered around $1,700 an ounce. A rebound in government bond yields may be hurting the precious metal’s safe-haven appeal as the improving growth outlook has pushed up the yield on 10-year US Treasury notes to the highest in two and half months.

Other commodities like copper and oil fared better, however, as the demand picture turned brighter. After a brief wobble this week on doubts about whether OPEC and its allies will be able to reach a deal on extending their output cuts, WTI is once again eyeing $38 a barrel and Brent crude has just hit a fresh 3-month high.

The OPEC+ group of countries were due to hold a meeting on Thursday, but it has now been postponed to June 6, barring any last-minute cancellations. Saudi Arabia and Russia have now reportedly reached a compromise, but a new row has erupted between members that are not fully complying with the production cuts. Still, an extension of at least one month is looking increasingly certain, and that should support oil’s rally for a while longer if confirmed. 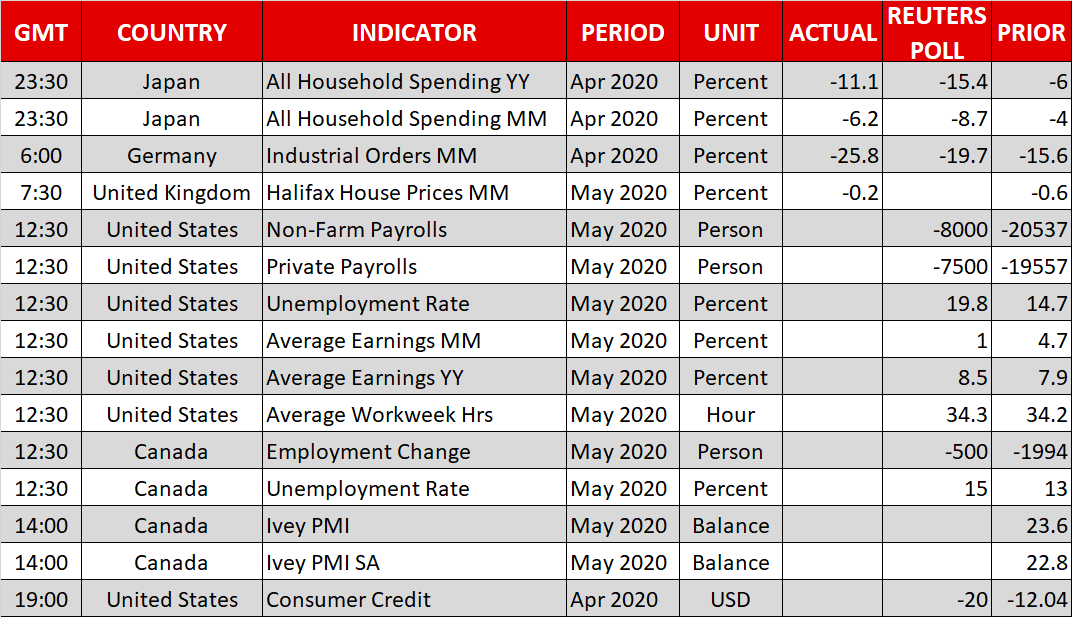