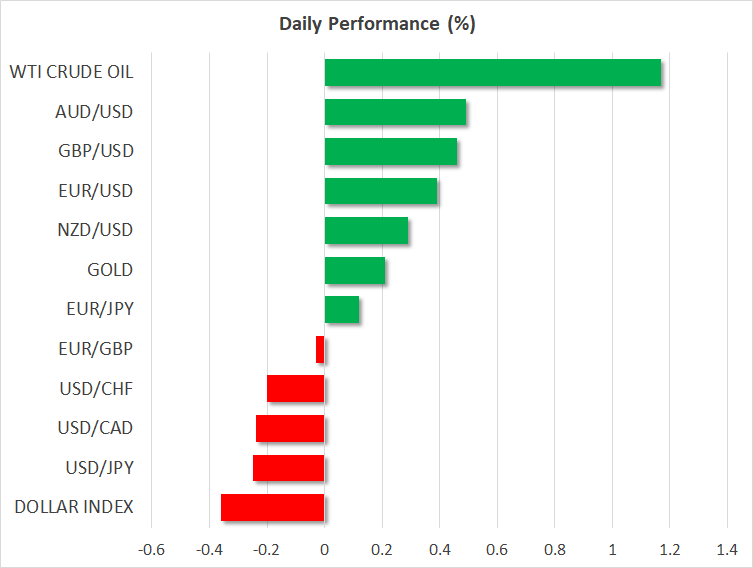 Global equities were back in bullish mode on Wednesday after a brief wobble earlier in the week had some investors worried that this could be the start of a long overdue correction in the markets. However, it didn’t take long for the optimists to take over the reins again as Moderna’s latest trials for its COVID-19 vaccine showed encouraging results.

Hopes that a safe and effective vaccine is within reach lifted Wall Street late into the session on Tuesday. Though the Dow Jones and the S&P 500 were already off their lows and unusually, it was the Nasdaq that needed a helping hand. Big tech stocks have been pummelled this week and it was energy and industrials that led yesterday’s rebound.

But the losses were more likely down to profit taking after the incredible gains since the start of the month rather than genuine concerns about the uncertain economic outlook. Nevertheless, with the earnings season only just getting underway and several big names such as Delta Air Lines and Wells Fargo reporting disappointing results, it’s hard to see the major indices being able to break out of their sideways range anytime soon.

Even if traders are able to put a positive spin on the grim earnings releases that will imminently flood the markets, there is the worsening virus picture in the United States that is somehow still being overlooked. Three US states reported a record number of daily deaths from the coronavirus on Tuesday, prompting several Fed officials to sound the alarms about the recovery.

Euro knocks down the dollar, gold up too

Yet, markets seem fixated on a V-shaped recovery with even gold becoming an unreliable barometer of risk lately as it’s unclear how much of the precious metal’s gains are down to safe-haven flows and how much are driven by the record low yields of government bonds, which are being distorted by an unprecedented amount of central bank intervention.

Gold edged higher for a third straight day, reaching $1810/oz, as the US dollar slid to one-month lows versus a basket of currencies. The main driving force behind the pullback of the dollar index has been the euro, which apart from the broad weakness in the US currency, is being boosted by the improving prospects of the Eurozone economy.

The euro just hit a 4-month high, surging above the $1.14 level, as investors bet that European Union leaders will strike a deal on a €750 billion fiscal stimulus package when they meet later this week.

The Australian dollar also rallied, breaking above the $0.70 level, despite a continued escalation in virus cases in Australia, which has forced regional lockdowns, as well as rising tensions with China. Upbeat trade numbers from China yesterday and tomorrow’s GDP report expected to show a strong rebound in Q2 are propelling the aussie higher.

Not wanting to be left out, the pound jumped by 0.5% against the dollar, reversing sharply higher after coming under pressure on Tuesday from much worse-than-expected growth figures for May that cast doubt on the strength of the UK recovery.

The loonie was also firmer but by not as much, as the Canadian currency was being held back from a potentially dovish shift by the Bank of Canada later today. Rising risks from a virus resurgence in the US and the weak outlook for oil will probably keep BoC policymakers on standby for further stimulus and the loonie could fall if they signal as much at today’s policy meeting.

In the meantime, the OPEC+ alliance will decide today whether to proceed with the proposed loosening of the production cuts, which could see output increase by 2 million barrels per day. Oil prices are being supported by the global recovery in consumption as economies reopen but the outlook is becoming more uncertain as a growing number of cities and regions around the world are re-entering lockdown.

Another sore thumb amidst the optimism is the worrying deterioration in Sino-US relations as the two sides continue to announce tit-for-tat measures against each other following the row over China’s decision to tighten its security grip on Hong Kong. President Trump on Tuesday signed an executive order ending Hong Kong’s special status with the US, putting Washington on a collision course with Beijing.