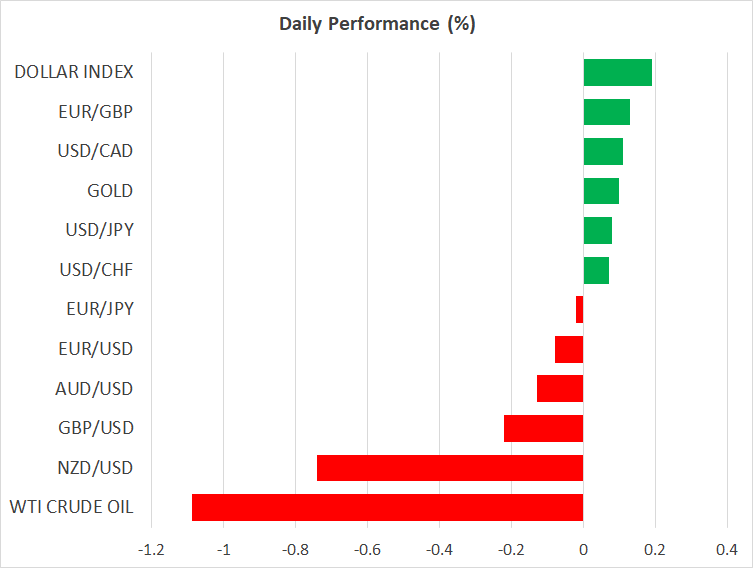 Global markets continue to be torn between conflicting narratives, as signs that the world economy has entered the recovery stage – with a little help from a tsunami of stimulus – clash with a worrisome spike in infections and bankruptcies. This dichotomy leaves investors little choice but to continue following the old pandemic playbook: buy tech giants that are best positioned to weather this crisis and hedge some risk by piling into havens like gold.

An encouraging batch of European PMIs yesterday added credence to the recovery story, sending the euro back above $1.13 and lifting global stock markets in the process. The euro’s gains came mainly to the detriment of the dollar, which retreated almost across the board. The only worse performer was the loonie, following whispers that the US may reimpose aluminum tariffs on Canada.

Taking advantage of the dollar’s troubles was gold, which soared to its best levels since 2012. Since most gold contracts are denominated in dollars, a retreat in the greenback makes gold cheaper for investors using foreign currencies, boosting demand.

In the big picture, the stars seem aligned for gold to climb even higher. Uncertainty is running rampant, central banks have crossed the Rubicon with ‘infinite’ quantitative easing, and government debts are exploding. A further retreat in the dollar could be the cherry on top that provides the momentum necessary to kickstart a dynamic bullion rally.

Alarming news keeps the bulls on a leash

The PMI-powered enthusiasm in markets was kept in check by another worrisome batch of US virus numbers, with the S&P 500 surrendering some early gains to close only 0.4% higher after California and Arizona reported record daily increases. While some of that is probably owed to more testing, hospitalizations are also rising quickly in several populous states, indicating that things are indeed moving in the wrong direction.

Another headline that passed almost unnoticed is that the number of US companies filing for bankruptcy protection last week rose to its highest level since 2009, at the peak of the global financial crisis. This is certainly something to keep an eye on. All the central bank liquidity in the world cannot solve the problem of insolvency, and if bankruptcies continue to soar that would be a gigantic hazard that doesn’t seem priced in at all.

In the face of such worries, investors seem content to keep buying tech giants with healthy balance sheets. Apple, Amazon, Microsoft, and Facebook all hit new record highs yesterday, catapulting the tech-heavy Nasdaq to yet another all-time peak and explaining why the S&P 500 managed to close in the green.

Looking ahead, the two themes that will likely decide the market’s fate over the coming days are how quickly US cases rise from here and whether Congress reaches a consensus on another rescue package. Once again, the classic battle between the virus blues and stimulus-driven optimism.

Overnight, the Reserve Bank of New Zealand kept its policy unchanged as expected, but cranked up the heat on the kiwi. Policymakers noted that the currency has appreciated markedly, dampening the outlook for inflation and exports. They also emphasized their readiness to add more stimulus if needed. The kiwi dollar fell immediately.