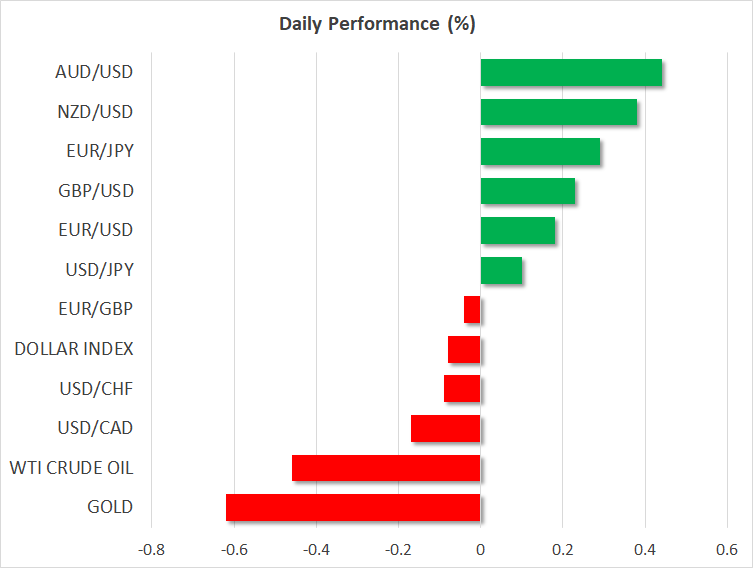 The European Central Bank kept its monetary policy settings unchanged on Thursday and sounded cautiously optimistic about the Eurozone’s recovery prospects. However, it was President Christine Lagarde’s stance on the exchange rate that caught the markets’ attention as she refrained from sounding the alarm bells about the euro’s recent fast appreciation.

After several policymakers had begun firing their usual round of warning shots on the impact of a strong currency, Lagarde was expected to uphold that message as her predecessor had done in previous rallies. However, it was clear on Thursday that Lagarde’s priority was to send a more upbeat message in an attempt to shore up the bloc’s fragile recovery.

The euro shot up on Lagarde’s apparent indifference about its strength, but the ECB’s lack of concern about deflationary risks also took traders by surprise, sending the currency flying above the $1.19 level at one stage. However, the gains moderated later in the session and the euro was last trading nearer $1.1840 as the Bank’s chief economist, Philip Lane, reminded investors today that the ECB is keeping a close watch on changes to the inflation outlook.

Brexit negotiations between Britain and the European Union are on the brink of collapse as Boris Johnson’s government refuses to back down on proposals to amend parts of the Withdrawal Agreement. The UK government wants to restrict some EU single market rules that Northern Ireland has to comply with in the event of a no-deal.

But the EU is threatening legal action against the UK if it goes ahead with the changes to the international treaty and emergency talks held yesterday failed to diffuse the situation. Neither were there signs of much progress in the Brexit talks on the last day of the latest round.

However, the discussions on a post-Brexit trade agreement will resume next week, providing some hope that a deal is still attainable. But even if the Brexit tone improves in the next few weeks, the pound could be facing other political risks as Johnson’s leadership comes increasingly under scrutiny from his own party.

A growing number of Conservative MPs are against their government’s plan for tweaking the EU divorce bill, and at this rate, if opposition to it intensifies, it could be Parliament rather than EU legal action that thwarts the move.

The fresh uncertainty pushed sterling to 1½-month lows versus the dollar yesterday and to 5½-month lows against the euro. But there was some support for the battered pound today from a strong bounce in UK GDP growth in July.

European stock markets were struggling today after another big drop on Wall Street on Thursday. Tech stocks once again led the declines, with the Nasdaq Composite having another brush with its 50-day moving average after plunging by 2%.

The mood deteriorated after Democrats in the US Senate blocked Republicans’ trimmed-down virus relief bill of about $500 billion. With Election Day just weeks away, it’s looking less and less likely that lawmakers will be able to break the impasse before then.

The strong August jobs report may have reduced the urgency for Congress to get a deal done quickly. However, the latest weekly jobless claims figures indicate there was an uptick in the number of people out of work at the end of August/early September.

This may add pressure on the Federal Reserve to provide a clearer forward guidance when it meets next week, especially if the choppiness in equity markets continues.

But the risk-off sentiment softened today as US stock futures turned positive ahead of inflation data due out of the United States at 12:30 GMT.

The dollar meanwhile eased slightly, handing back some of yesterday’s gains. 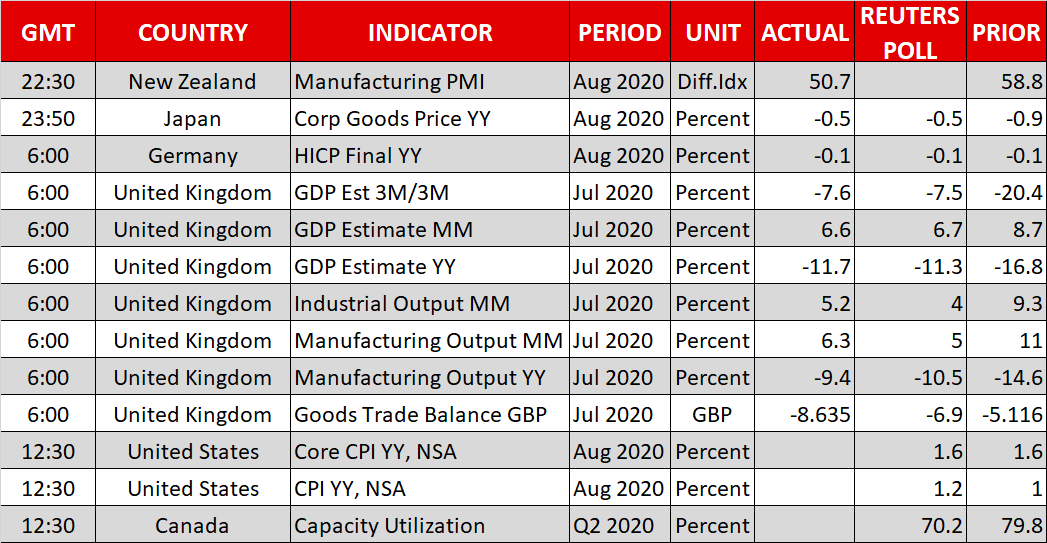