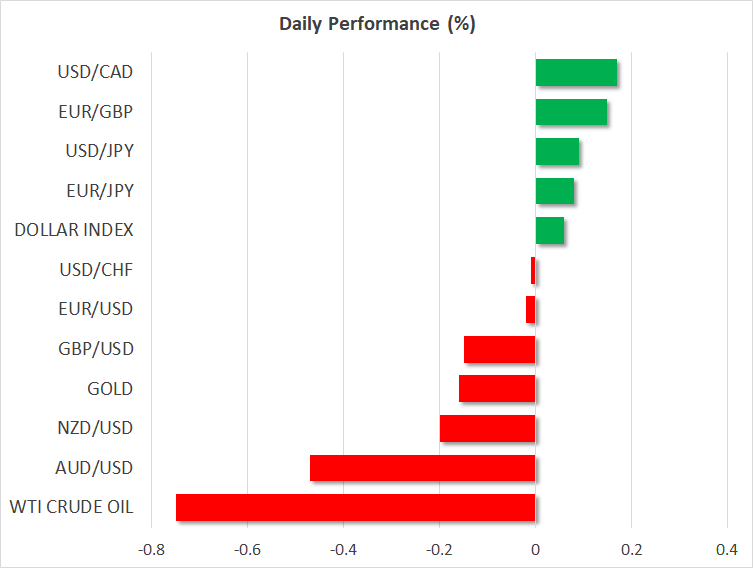 Crude oil prices moderated slightly on Tuesday as the United States and Japan pledged to release their countries’ oil reserves if needed, while President Trump said he’d like to “avoid” going to war with Iran. Both Brent and WTI oil jumped by about 15% on Monday after Saudi Arabia’s crude oil processing facilities were attacked in drone and missile strikes on Saturday. Houthi rebels in neighbouring Yemen have claimed responsibility for the attacks but the US suspects they originated from Iran.

The attacks wiped out 50% of Saudi Arabia’s oil output, sending prices spiralling upwards. But tensions subsided after Trump stepped back from earlier threats of a military response against Iran and said he would prefer “not to have war”.

Brent and WTI were last trading around 1% lower, while gold also retreated back below $1,500 an ounce as demand for safe havens eased.

However, risk sentiment remained fragile and stocks were unable to regain their positive footing following last week’s global rally. Chinese stocks were the biggest losers on Tuesday as investors were disappointed that the People’s Bank of China kept a key interest rate unchanged.

Caution ahead of Fed meeting

US stocks futures were also in the red, suggesting some caution ahead of the Federal Reserve’s policy decision on Wednesday. The Fed is widely expected to cut its benchmark rate by 25 basis points (bps) tomorrow, but investors have been unwinding some of their more bearish bets in recent days. Traders have not only halted their bets of a more aggressive 50-bps cut but a 25-bps cut is no longer fully priced in for September.

Treasury yields have rebounded sharply as a result, with the 10-year yield climbing above 1.8% and lifting the US currency. The dollar reached a one-month high of 108.36 yen earlier today as investors grew increasingly uncertain about the prospect of additional rate cuts by the Fed beyond this week’s anticipated reduction.

Further helping sentiment towards the greenback was news that the US and Japan have reached an agreement on a limited trade deal. The announcement comes just days before US and Chinese negotiators are due to start preparatory talks for high-level discussions in early October.

Any additional easing in trade tensions in the coming weeks could exacerbate the dollar’s advances if the Fed fails to lay out a clear path of falling interest rates at its meeting tomorrow.

Aussie under pressure from dovish RBA

One central bank that hasn’t held back in adopting a dovish stance is the Reserve Bank of Australia. Expectations of a rate cut in October or November got a boost after the minutes of the RBA’s September meeting kept the door firmly open for another cut in the upcoming meetings.

Although there was little new in the minutes, policymakers’ overly gloomy portrayal of the global and domestic economy caught investors off-guard, driving the Australian dollar about 0.3% lower versus its US counterpart.

The pound was also struggling on Tuesday as the meeting between the UK’s Boris Johnson and the EU’s Jean-Claude Juncker yesterday produced no breakthrough. Although both sides agreed to intensify the talks and Johnson remains optimistic that there’s enough time to reach a deal, the EU is still waiting for the British government to come up with concrete alternatives to the Irish backstop.

Sterling extended its declines today to drift towards the $1.24 level, but the euro managed to reverse higher to recoup some of yesterday’s sharp losses.