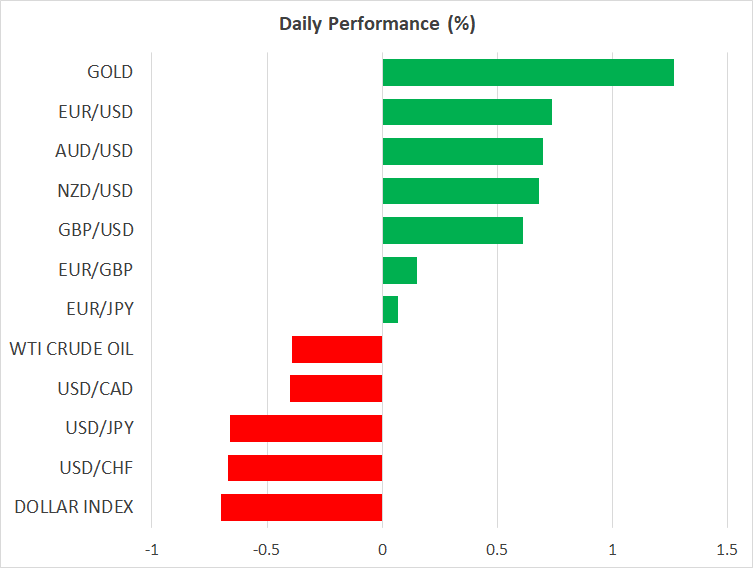 As expected, Fed Chair Jerome Powell unveiled on Thursday a big shakeup of how the Federal Reserve conducts monetary policy. The Fed adjusted its objectives for both inflation and employment, moving to a more flexible regime of targeting an average inflation rate of 2% over time and emphasizing shortfalls in employment as opposed to deviations from the maximum level of employment.

The overhaul, which follows the central bank’s more than a year-long review of its policy framework, effectively means the Fed will allow inflation to overshoot its target to compensate for periods of undershooting it. It also means achieving full employment across the economy and within different communities will be a priority, sending a clear signal that interest rates won’t be going up anytime soon.

But while that messaging initially sent 10-year Treasury yields plunging as investors anticipated lower rates for longer, it didn’t take long for yields to make a U-turn and jump higher as inflation expectations began to creep upwards on the back of the Fed’s new loose approach to controlling inflation.

The price swings in the bond market were mirrored by the US dollar, which dipped to a one-week low against a basket of currencies after Powell dropped his bomb but rapidly retraced those moves as yields recovered.

However, today, the greenback had reverted back down again as other government bond yields caught up with Treasury yields, easing the upside pressure on the US currency.  This was a welcome relief for the euro, which had been on the backfoot lately as new cases of coronavirus in Europe continue to rise, raising doubts about the recovery. The single currency was last making a fresh dash for the $1.19 level, while the pound just hit an 8-month top of $1.3289.

But it was the Australian dollar that stood the tallest, gaining 0.7% to break above $0.73 for the first time since December 2018. Signs that the Australian economy didn’t suffer a steep recession from the COVID-19 crisis and an easing of the second virus wave have bolstered the positive outlook for the country.

The safe-haven yen was also on the up on Friday but for different reasons. Japan’s prime minister, Shinzo Abe, has announced he is to step down for health reasons, potentially marking the end of the Abenomics era. Ultra-aggressive monetary easing has been one of the pillars of Abenomics and Abe’s resignation raises the prospect that a different prime minister might not be as supportive of the Bank of Japan’s unorthodox policies.

But until Abe’s successor has been chosen, there’s unlikely to be a significant reaction in the yen. The currency has already steadied after briefly spiking higher on the news, with the exception of dollar/yen, as the greenback’s own slide has exacerbated the pair’s decline.

Equity markets were mixed on Friday as investors digested the details of the Fed’s policy revamp. In Asia, Chinese stocks enjoyed their strongest day of the week but Japan’s Nikkei 225 index closed 1.4% lower on worries about the policy impact of Abe’s resignation.

Major European bourses were mixed but US futures were pointing to a higher open. The Nasdaq Composite bucked the trend on Wall Street on Thursday, closing down and ending five straight sessions of posting record highs.

Reports on Thursday that a fresh effort by Democrats and the White House to break the stalemate in the fiscal stimulus talks went nowhere may have weighed on sentiment slightly. But equity markets appear largely unfazed by the real possibility of a fiscal cliff in the United States just before the presidential election in November.

Looking ahead to the rest of the day, personal spending and consumption numbers will be watched out of the US, as well as Canada’s GDP print for the second quarter. 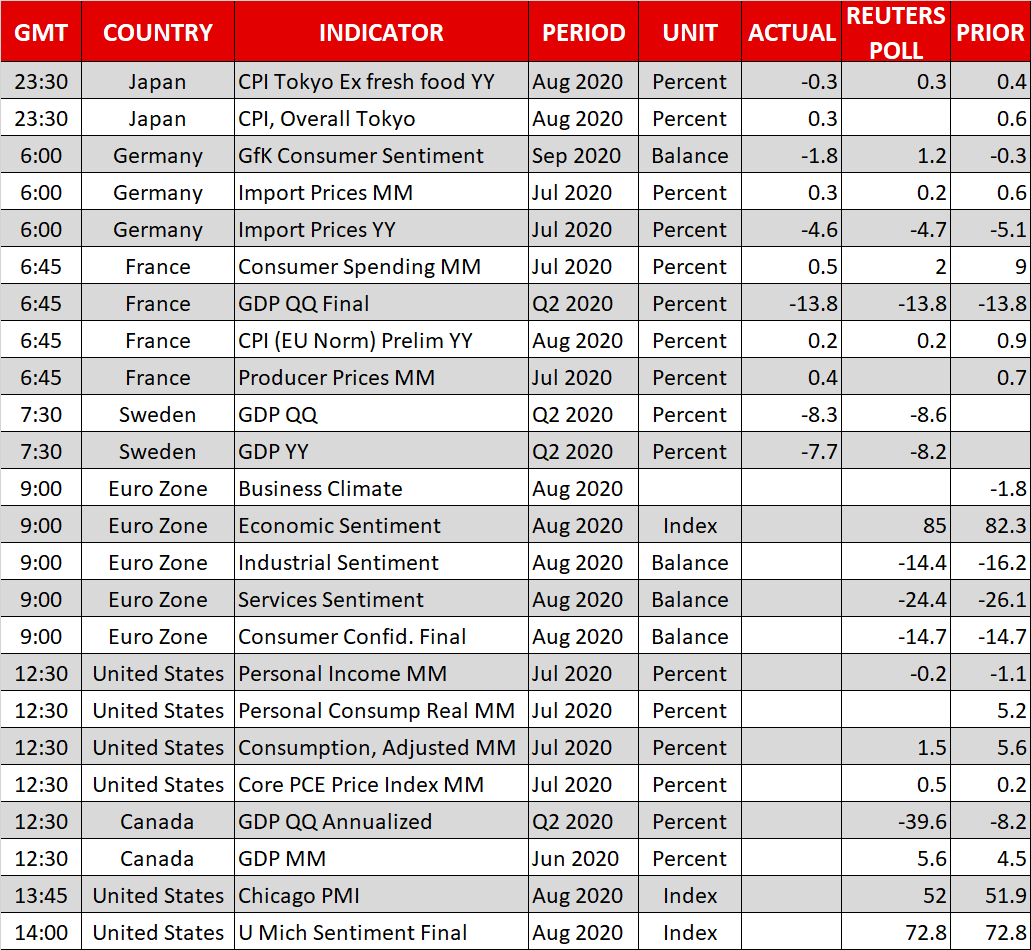