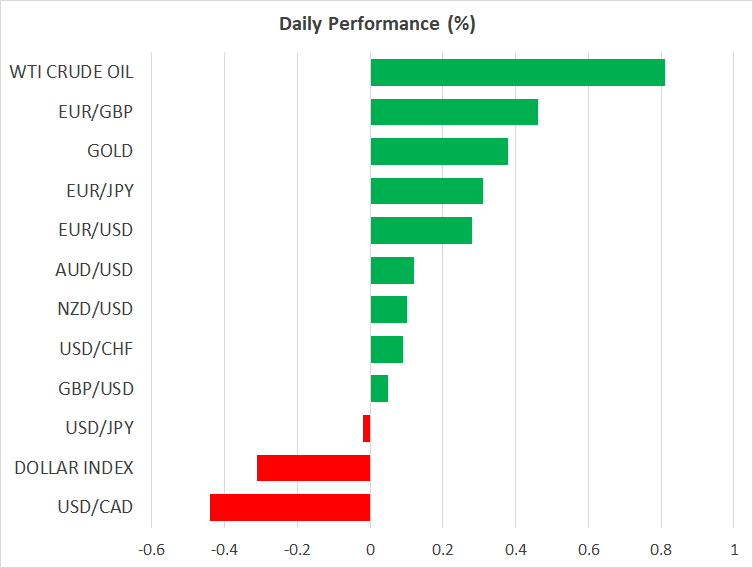 Relief as US stimulus and spending bill becomes law

Trading for the last week of 2020 got off to a bullish start after President Trump unexpectedly signed into law the Covid-19 relief and funding bill late on Sunday after repeatedly refusing to do so. The $2.3 trillion package, which includes a fresh round of benefits and stimulus checks for millions of struggling Americans as well as new funding to keep the government open, had become a major source of contention between the President and Congress over the past week.

Unhappy about ‘wasteful’ items and the ‘ridiculously low’ stimulus check of $600 per person, Trump had sought to pile pressure on lawmakers, specifically on his own Republican party, to improve the package. However, with crucial unemployment benefits expiring on Saturday and a looming shutdown (since the stimulus package was tied to the government spending bill), Trump appears to have backed down on his demands.

In a minor win for Trump, the House looks set to press ahead with a planned vote today on increasing the stimulus checks to $2,000. But even if the Democratic-controlled chamber approves it, it’s highly unlikely the Senate – where Republicans hold a majority – would ever pass such a legislation.

Brexit deal is finally done, but no rally for the pound

Britain and the European Union finally clinched a deal on a post-Brexit trade pact on the night before Christmas. But the agreement was far from a fairy tale ending to four and a half years of deep economic uncertainty and political drama. While Prime Minister Boris Johnson appears to have secured a number of significant concessions and the deal is comprehensive in that it covers areas other than trade, such as transportation and security, many businesses still face a bumpy road ahead as they adjust to the new rules.

Although tariff-free trade will continue on January 1, 2021 when the transition period ends, frictionless trade will not, as businesses doing trade across the Channel will have to get used to customs checks coming into force for the first time in decades. Most significant of all, the UK’s massive financial services sector will lose its passporting rights, which provided it full access to operate in EU markets.

In the absence of any wins for the City of London or closer-than-anticipated trading terms, there’s little in the deal capable of refuelling the pound’s rally as the ‘thin’ agreement seems to have been mostly priced in already. Sterling was last trading marginally higher against the US dollar at 1.3557, while it was down 0.4% versus the euro at 0.9027.

With Brexit out of the way, the pound’s outlook in the coming months will likely be more directly linked to the path of the virus. Pressure is growing on the UK government to place more areas of England under the toughest tier of virus restrictions as infections continue to soar following the discovery of a new more contagious Covid strain.

US stock futures firmed on Monday, hoping to build on Thursday’s gains and scale new all-time highs. The S&P 500 and Nasdaq Composite were last indicated up about 0.6% and European futures were also positive.

Now that the uncertainty has ended over the US stimulus package and Brexit deal, there’s nothing stopping stock markets from heading into record territory in the run up to the New Year.

The risk-on mood was clearly dictating moves in the currency markets as the US dollar slipped towards one-week lows against a basket of currencies on the back of a stronger euro and loonie. The single currency advanced above the $1.22 level after losing ground last week.

The Australian dollar was another strong performer, but it was the Canadian dollar that claimed today’s top spot among the majors as it benefited from the prospect of more stimulus in Canada’s closest trading partner.

Gold was also firmer today as it too stands to gain from the virus relief bill being finalized as a higher US government deficit tends to be negative for the dollar. However, after having a pop at the $1,900/oz level, gold pulled back as it was unable to overcome strong resistance in that area.