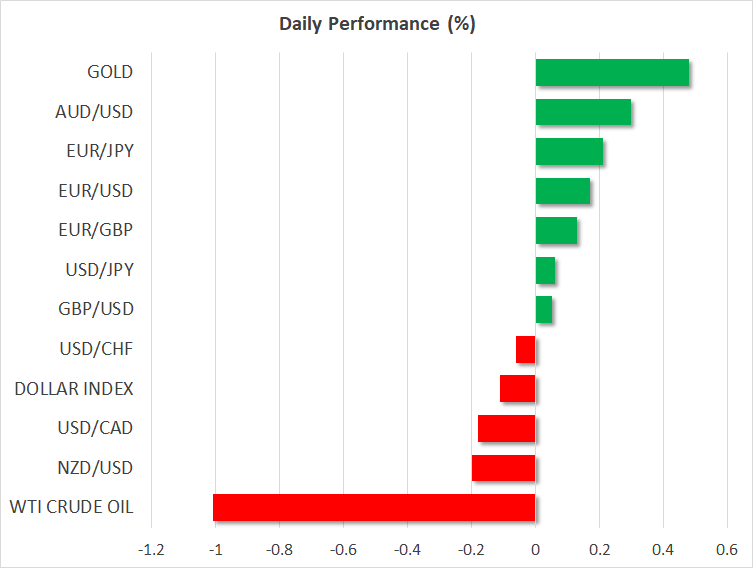 Equity markets were in a surprisingly chirpy mood on Monday, with little sign of distress ahead of what is expected to be the worst earnings season in at least 12 years. Banks will be the primary focus this week, with Citigroup, JP Morgan and Wells Fargo kicking things off on Tuesday. Financial stocks that derive a higher share of revenue from investment banking look set to be the winners as the volatile trading of the past few months is likely to have boosted those banks’ earnings.

Another company that probably had a stellar Q2, benefiting from people stuck at home, is Netflix, which reports its results on Thursday. But in a tale of two diverging backdrops, Main Street banks are expected to have taken a heavier hit from the economic shutdowns, while Delta Air Lines could be another one that spoils the party tomorrow as it is expected to report grim results after the coronavirus pandemic plunged the entire travel industry into crisis.

However, although there is no doubt that this earnings season will bring plenty of surprises – good and bad – the bar has been set very low for revenue expectations. Earnings for S&P 500 companies are estimated to have slumped by about 44% in the second quarter and given the impressive pace at which consumption bounced back in the United States and elsewhere after the lockdowns were eased in May, many firms will have an easy job in beating the gloomy forecasts.

And this is what most traders appear to be betting on, with US stock futures gaining around 0.6% in European trading, having sharply reversed higher on Friday. Shares in Asia closed mostly in positive territory today and European stocks jumped by over 1% at the open as optimism about the economic recovery from the virus continues to prevail over the still hugely uncertain outlook.

In the currency markets, major pairs were also being driven by the mildly risk-on trades even as the virus flare-ups in the US, Australia and Japan show no sign of subsiding. Hong Kong has become the latest in a growing list of nations that are seeing a surge in new infections, while the US state of Florida reported a fresh daily record in new cases on Sunday.

Yet, markets are still not panicking and there are several reasons for this. For one, the rising tally is being partly attributed to increased testing. Another is that many countries are seen to be better prepared to deal with a second wave and until investors start to see the health system in places like the US come under strain, forcing the re-imposition of state-wide lockdowns, the recovery will not be deemed to be under threat.

The underlying assumption of course is that the abundance of liquidity and business reopenings will be enough to keep the recovery intact until a vaccine for Covid-19 becomes available. Investors have pinned their hopes on a vaccine timeline of early 2021 even though many medical experts warn that that may be too optimistic.

But that’s a worry for another day as far as markets are concerned and the safe-haven US dollar continued to drift lower against a basket of currencies on Monday, having slid for the past two weeks. The dollar’s losses come despite a strong rebound in US Treasury yields following Friday’s dip, as well as growing trade tensions between Washington and the European Union after the Trump administration slapped 25% tariffs on $1.3 billion of French goods in a spat over France’s plan for a digital tax. Although the tariffs are suspended until January 2021, they are a reminder of what’s waiting around the corner once the pandemic eases.

There was little reaction in the euro either to the tariff news, though the single currency was struggling to hold onto the $1.13 level today after a strong performance last week. Euro traders are likely to be more cautious this week ahead of Thursday’s ECB meeting and an expected decision by EU leaders at the weekend on whether to approve a €750 billion fiscal aid package.

Gold, however, headed sharply higher, gaining 0.5%, basking in the uncertainty and as investors gear up for a potentially volatile second half of July as the earnings season gets underway and EU and US fiscal stimulus decisions hang in the balance.