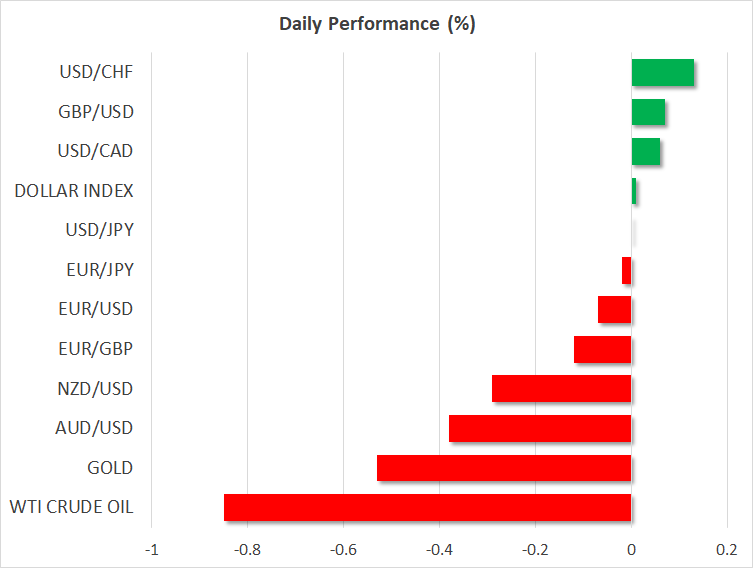 Rising pessimism about the prospect of a swift economic recovery from the pandemic dragged down equities on Thursday. The rout in global stock markets follows a sharp slide on Wall Street on Wednesday when the Nasdaq Composite plunged by 3% and the S&P 500 lost 2.4%.

Stocks have been on the back foot since early September and are on track for their first monthly drop since March. While concerns about overvaluation may have been an initial trigger for the slump, the diminishing likelihood of a near-term fiscal stimulus package in the United States and tighter virus restrictions in Europe have severely dented the most optimistic forecasts for the recovery, sparking a major pullback in risk assets.

With no let-up in Europe’s daily surge in new COVID-19 cases, consumers on the continent and in the UK appear to be turning less confident, adding to the pain for businesses already burdened by a growing list of social distancing rules. The faltering recovery in Europe comes as the US rebound is losing momentum in the absence of a fresh injection of government cash.

Congress is reportedly preparing to go on recess again, having just passed a stopgap funding bill, and will probably not return until after November’s presidential election. That pretty much rules out any chance of a virus relief bill being agreed upon before the election. On top of that, President Trump has fanned fears that the election outcome could end up at the Supreme Court after he refused to commit to a peaceful transfer of power should he lose, when asked directly by a reporter.

The election anxiety has added to Wall Street’s headaches and US stock futures remained in the red at the European open.

Federal Reserve officials have been out in droves this week trying to expound on the central bank’s new inflation targeting regime and the projections from the September FOMC meeting. But while policymakers have gone out of their way to reassure markets that raising rates is a long way off, they’ve also stepped up their calls for more fiscal stimulus. Chairman Jerome Powell reiterated his plea to Congress for more fiscal support on his day two out of three of testimony before lawmakers on Wednesday.

But in raising the urgency for more government support, the Fed may have contributed to the worsening mood by suggesting that the US economy is headed for troubled waters. And without any new pledge for monetary stimulus by the Fed, markets will probably struggle to stage a comeback.

Although there is little doubt the Fed would not hesitate to increase its monthly cap of $120 billion in asset purchases should it need to, the aim of policymakers to pile pressure on politicians for more fiscal action, at least until the election, could backfire if investors become impatient.

Dollar holds firm as others crumble

It was a somewhat steadier picture in currency markets as the US dollar eased up on its upward charge. The greenback held at two-month highs versus a basket of currencies as the euro struggled after yesterday’s worrying flash PMI figures. The single currency’s uptrend appears to be over after breaching the major support zone of $1.17. Virus and recovery worries have also battered the pound in recent sessions, though cable edged higher today on expectations the UK’s finance minister will announce a new wage subsidy scheme to replace the current costly one, which expires at the end of October.

But once again it was the commodity currencies that lagged their FX peers as the deteriorating sentiment weighed heavily on the risk-sensitive aussie, kiwi and loonie. The Australian and New Zealand dollars, in particular, have been hit hard recently on rising expectations of a rate cut in both countries soon.

The Swiss franc, meanwhile, was mixed on Thursday after the Swiss National Bank kept policy unchanged but revised up its growth forecasts even as it said it will continue to intervene to lessen the upward pressure on the franc. 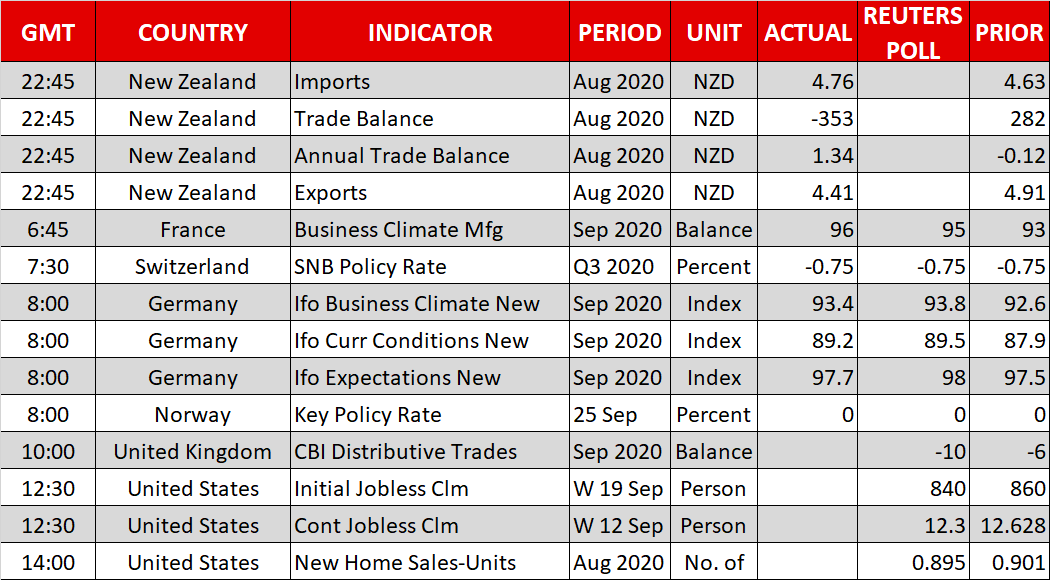