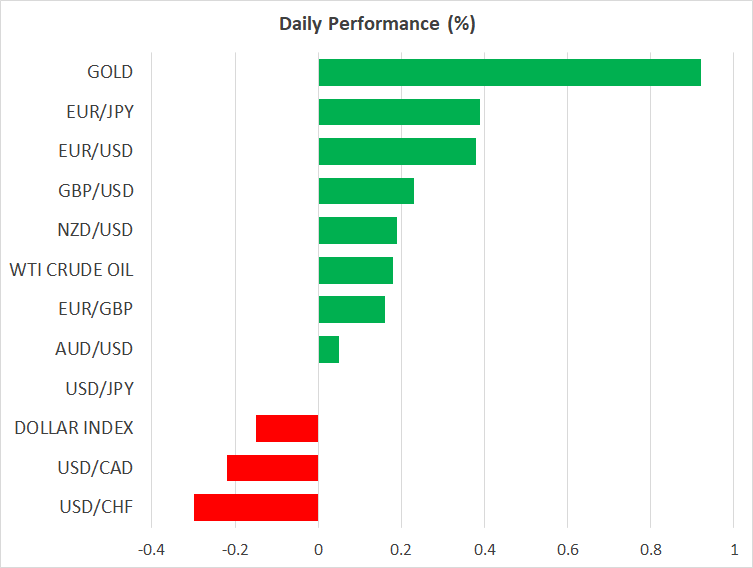 Recovery back on track, at least in Asia

Strong manufacturing PMIs out of Asian powerhouses lifted the market mood on Tuesday, reversing some of the gloom that set in yesterday from soft US indicators. A quickening in the manufacturing revival in China, Japan and South Korea in November, as well as a boom in housing construction in Australia eased concerns about the short-term growth outlook.

Combined with the constant positive news flow about coronavirus vaccines – with the latest being Moderna’s filing for regulatory approval for its vaccine – markets were feeling chirpy again on Tuesday.

After yesterday’s wobble, the major indices in Asia closed sharply higher today, led by strong gains in China and Tokyo, where the Nikkei 225 index soared to the highest in nearly three decades. European shares also rebounded, while US stock futures pointed to gains of about 1% on Wall Street today.

But after a record-breaking month for global equities, profit-taking was as much to blame for Monday’s selloff and it was the US dollar that was the main victim of the changing mood swings. Having started the day on the backfoot, the greenback shot higher yesterday as US stocks opened lower, and advanced further after a surprise dip in pending home sales and a weaker-than-expected print in the Chicago PMI.

The disappointing numbers added to worries that the US recovery is losing steam and in danger of faltering without further stimulus. With little prospect of Congress getting its act together on a new virus relief bill under the current lame-duck administration, it may be up to the Federal Reserve to cushion the economic blow from the surge in virus cases across America.

However, all the indications are that the Fed is yet undecided about how it will respond to the immediate risks to the economy. In his prepared speech, to be delivered before a Senate committee hearing on the CARES Act, Fed Chair Jerome Powell highlighted the dangers to the short-term outlook even as he acknowledged the positive impact of the vaccine to the medium-term picture.

Still, Powell gave little away about what kind of policy action to expect in December, hence, investors will be hoping he slips some clues when quizzed by lawmakers at 15:00 GMT.

In the meantime, the dollar was headed back down as it reversed course after Asian markets opened on a positive note. The dollar index was last down 0.2%, not far from yesterday’s 2½-year low.

The euro and Australian dollar were equally choppy over the past 24 hours, with their moves being dictated entirely by the greenback. Both currencies were firmer today, with the euro powering past $1.1975, though the aussie was lagging behind its kiwi and loonie cousins as the diplomatic spat between China and Australia showed no sign of abating anytime soon.

The pound, which managed to hold on to some gains yesterday, was having a fresh go at the $1.34 handle today as investors remained upbeat about the chances of the UK and the EU striking a post-Brexit trade agreement in the next few days.

Talks over the weekend were described as “quite difficult” and the two sides maintained pressure on each other by keeping the option of a no-deal outcome open. But markets seem to think a deal is imminent.

In commodities, oil prices benefited from the improved risk tone even as the OPEC+ group of countries delayed a decision on whether to extend existing output cuts to Thursday. The move signals divisions within the oil alliance on the need to maintain tough production quotas. But both WTI and Brent crude were relatively stable today, trading up by 0.3% and 0.5%, respectively.