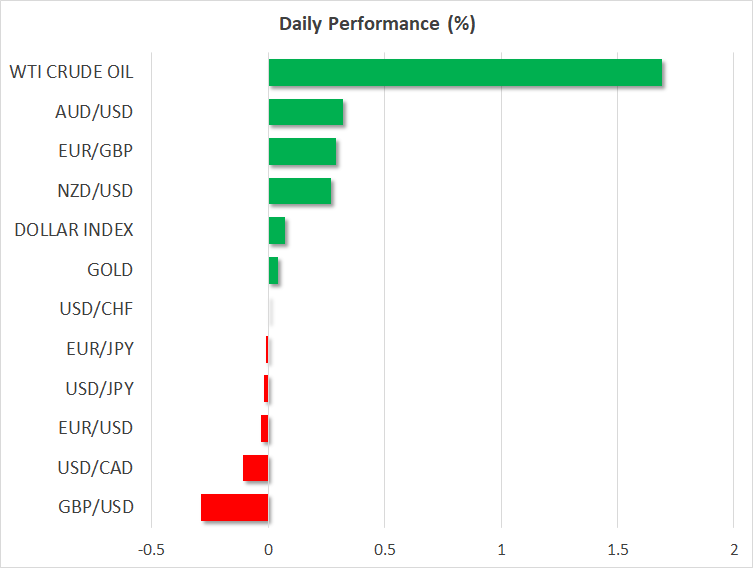 Is this the end of the tech rally?

Equity markets were reeling on Wednesday from a third consecutive day of declines on Wall Street yesterday as big-name tech stocks suffered another major selling episode. The tech-centric Nasdaq Composite plummeted by 4.1%, taking its fall from grace from a week ago to 10% – dangerously close to correction territory.

The S&P 500 and the Dow Jones Industrial Average fell by a relatively more modest 2.8% and 2.3% respectively, but the fallout on Wall Street was enough to drag European shares lower on Tuesday, with Asian markets following suit today.

Tesla, whose rejection from inclusion in the S&P 500 was one of the triggers of this selloff, has taken the worst beating, sinking by 34% from its record high from last week. Other tech giants like Apple, Microsoft and Amazon.com have also seen their shares plunge close to or below their 50-day moving averages.

Somewhat more concerning perhaps was that yesterday’s losses afflicted energy and financial stocks as well, in what could be a sign that the pullback is broadening.

But is this just a healthy correction following a long, uninterrupted period of hefty gains or are markets just waking up to the fact that the global economic recovery from the pandemic will not be as quick and as painless as investors had originally envisioned?

Judging by where US stock futures were headed in early European trading today, the rout could already be over. S&P 500 and Nasdaq e-minis are indicating gains of between 0.5-1%.

However, large intraday swings in market sentiment are becoming a common thing lately so whether those gains will hold or be wiped out remains to be seen. There’s certainly enough worrying headlines that could spark more panic.

AstraZeneca’s trial for its coronavirus vaccine has been halted after one patient displayed a serious adverse reaction. The setback could potentially delay the completion of the trial and raises questions about the safety of the vaccines currently under development.

Another possible threat to the wavering risk rally is the diminishing prospect of the US Congress reaching a deal on a new virus relief bill before the November presidential election. Senators are planning to hold a vote on Thursday on a trimmed-down package. But even if the bill passes, it’s unlikely to be approved by the House, meaning the US recovery could come under increasing strain in the coming weeks as fiscal support dries out.

Dollar and yen shine, but not very bright

The renewed jitters about the recovery lifted the US dollar to a one-month high against a basket of currencies on Wednesday, with the yen benefiting too from safe haven flows. However, their advances have been moderating during the course of the day as sentiment improves and risk-sensitive currencies such as the Australian and New Zealand dollars have managed to reverse higher, with a surprise jump in Australian consumer sentiment in September giving the aussie an extra helping hand.

However, the latest bout of volatility was unable to inject some life into gold as the precious metal remained confined to the $1,930/oz region amid the opposing forces of a stronger dollar and weaker risk appetite.

Pound slips below $1.30; oil slump pressures loonie ahead of BoC

The pound fell to a more than 6-week low on Wednesday, crashing below the $1.30 level, as Brexit fears began to mount again. Sterling has been on the decline after Prime Minister Johnson ratcheted up the rhetoric with the EU as Brexit talks resume this week. But the losses accelerated after the UK government’s top lawyer resigned over Johnson’s plan to overwrite some aspects of the Withdrawal Agreement relating to Northern Ireland, as such a move could be in breach of international law.

The Canadian dollar has been another underperformer this week as oil prices have fallen sharply in recent days on growing concerns that the recovery in demand for crude oil is faltering. However, the commodity was steadier today, which provided some support to the loonie.

But the Canadian currency could face further volatility later in the day when the Bank of Canada announces its latest policy decision. Although no change in policy is expected, any minor tweaks to the BoC’s forward guidance will be watched carefully for possible clues on the likelihood of further easing.