Hopes rise for a deal in Congress

Hopes are running high on Capitol Hill that a stimulus deal can be reached after reported progress on Tuesday. US political leaders are set to meet again later today as they inch closer to agreeing on a fresh round of virus aid before the year is out.

After months of talks that only led to increased acrimony, Republicans and Democrats appear to be uniting behind a bipartisan proposal for a $748 billion package, which is said to contain much needed help for struggling small businesses and millions of out-of-work Americans.

The package is part of two proposed bills, with the other containing the more controversial measures amounting to $160 billion, though it’s likely there won’t be the support needed to pass the second bill.

Still, any extra help for the economy will come as a relief for the markets as the US recovery is showing some cracks amid a worsening of the virus outbreak in many states. Wall Street closed 1-2% higher on Tuesday as investors cheered the renewed momentum to get a deal done. The positive mood looks set to extend into Wednesday as stocks globally, including US futures, were in the green.

The British government continued to maintain a downbeat assessment of the ongoing negotiations for a post-Brexit trade agreement with the European Union. While citing some progress, UK sources are saying the two sides are “very far apart” in some key areas. In contrast, European officials have sounded somewhat more optimistic, suggesting the UK is playing hardball and is only likely to concede on its red lines at the very last possible minute.

This underscores the view that neither party is ready to walk away from the negotiating table, hence, the talks could drag on at least until Christmas.

In the meantime, the pound is bouncing higher again to test the $1.35 level, as traders take their cues from rumours rather than official statements. Speculation that an announcement is imminent surged yesterday after a BBC reporter tweeted there was a “big buzz” among Conservative MPs that a deal is nearing. The next clue for a deal could come from Parliament being asked to sit next week during what would normally be the Christmas recess.

The euro was also in a buoyant mood today, crossing above the $1.22 level for the first time since April 2018. Optimism for a Brexit deal and more fiscal stimulus in the United States are fuelling risk appetite, while the euro can also take comfort from the ECB and the EU recently approving new stimulus measures, as well as better-than-expected flash PMI prints for December out of the Eurozone today.

The risk-sensitive Australian and New Zealand dollars also rallied on Wednesday, scaling fresh 2½-year highs, but the Canadian dollar was unable to sustain yesterday’s gains and pulled back from a brief spike below C$1.27. Cautious remarks from Bank of Canada Governor Tiff Macklem yesterday may have knocked the wind out of the loonie, specifically, his concerns about the stronger exchange rate.

The weaker US dollar has been causing headaches for policymakers around the world and their problems may get even worse if the Fed decides to shift its bond purchases towards longer-dated Treasuries. Such a move would push down relatively high US yields, further eroding the advantage to hold the greenback.

In its reluctance to boost an already hefty monthly pace of asset purchases, the Fed may additionally attempt to maintain a dovish line by strengthening its forward guidance to signal that it will continue to buy huge amounts of securities for some time to come.

Apart from further sinking the US currency, the above policy actions could inject fresh life into gold, which has been struggling to benefit much from the dollar’s descent amid the broader risk-on theme. The precious metal was last trading 0.6% higher ahead of the Fed’s announcement at 19:00 GMT. 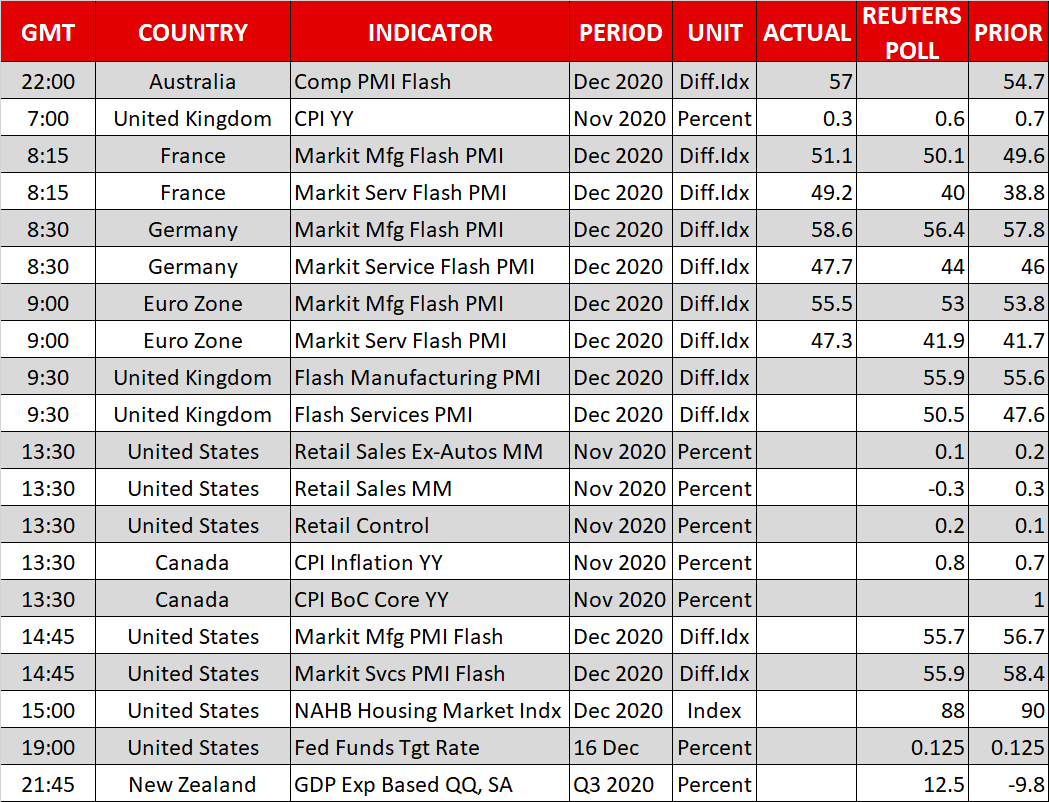